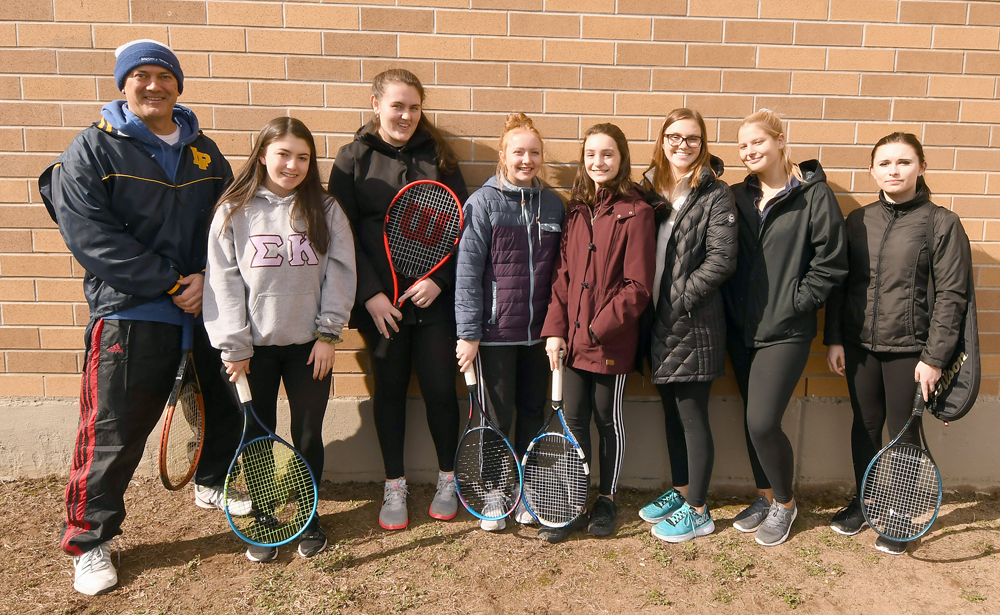 LAKE PLACID — Two postives for the Lake Placid girls tennis team this season are the Blue Bombers have numbers and for the first time, players from Saranac Lake will be joining the squad.

Lake Placid, however, will be facing a monumental learning curve as only three team members are returning from a season ago, while the remaining 10 student-athletes on the roster have never played tennis before.

The best-case scenario for the Blue Bombers entering their Champlain Valley Athletic Conference schedule is they will be able to have one practice on actual courts on the day they return from spring break, which would be the day before their season-opener.

“My three girls coming back have some experience,” coach Jon Fremante said. “I don’t think the rest have even hit a ball over a net. Four of the seven girls I put on the courts for our first match will be playing tennis for the first time.”

Fremante said a big goal for the team this year is introducing the sport to the new players in hopes they will enjoy the game, and continue to play tennis for years to come. That would bode well for Lake Placid’s future, as only one player on the team is a senior.

Barrett is the lone senior on the squad and heads into the season as the Blue Bombers’ No. 1 singles players. Fremante expects her to have a solid season on the courts around the CVAC.

“Barrett played in the No. 2 spot last year. She played well and played tough matches,” Fremante said. “Since then, she went to tennis camp and improved a lot of her basic skills. She’s competitive and she likes to win.”

Robinson is a junior and Hudson is a sophomore who are both back with some experience at singles and doubles, and will step into the Blue Bombers’ second and third singles spots.

“Jillian has an unorthodox swing, but she’s very consistent,” Fremante said. “Karis is good technically and just needs to get some games under her belt to gain some confidence. I think both of them will be able to hold their own.”

Lake Placid’s two doubles teams will be filled out by the remaining 10 players on the roster, and Fremante said it was going to be tough figuring out who will be competing in those two spots prior to any preseason practice on an actual court. Heading into spring break, Fremante said he was looking at five or six girls in particular who might step into the first and second doubles positions.

“I’m hoping on the Monday after we get back from spring break I can finalize who will be our top seven,” Fremante said.

He added that the big objective this spring will hopfully be turning his new players to a sport they will enjoy for years to come and well after their days in high school are over.

“The goals for the season are to get my new girls as much experience as quickly as they can, win a a few games, and get their enthusiasm up to come back eager to play next year,” Fremante said. “Above and beyond anything, we want them to have fun as a team and play a sport they can continue in well beyond high school.”