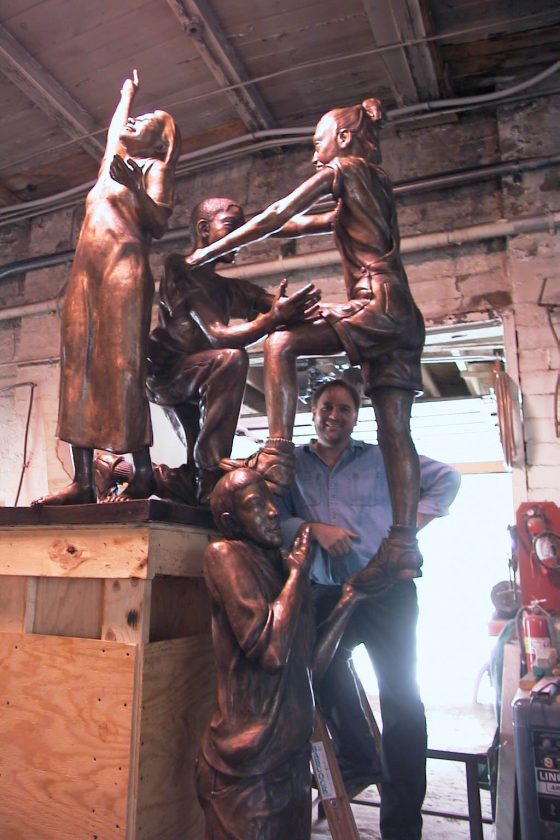 Sculptor David Poulin is framed by a project from September 1999 that is on display in Niagara Falls’ Hyde Park. (Provided photo — Post-Journal)

Chief among those on that list were his family — notably his 10-year-old son Nigel.

But, according to his wife Connie, one of the guiding lights in his professional life was an essay by Elbert Hubbard entitled, “A Message for Garcia.” Written just prior to the Spanish-American War in 1899, it famously expresses the value of individual initiative and conscientiousness in work.

“Civilization is one long anxious search for just such individuals,” Hubbard wrote. “Anything such a man asks will be granted; his kind is so rare that no employer can afford to let him go. He is wanted in every city, town, and village — in every office, shop, store and factory.”

“He would read that to his students, just the idea that it’s within each of us to create and do anything,” Poulin said of her husband. “As an individual, you have endless potential if you stay focused on the positive and tune out the negative Dave believed that wholeheartedly.”

Poulin, whose artistic footprint spans 120 commissioned public works that live in parks and outside of school districts across the globe, passed away suddenly last week at the age of 59 following a pulmonary embolism.

A majority of his commissions are located across western New York and northwest Pennsylvania, 11 of which are located in the Jamestown area including the Underground Railroad tableau at Dow Park and an homage to skaters in front of Northwest Arena.

But the infamy of a privately commissioned statue of Lucille Ball that eventually became a public piece at the Celoron park bearing her name has come to unfittingly define him five years after receiving national attention, according to those who knew him well.

“I get very frustrated when he’s attached to the ‘Scary Lucy’ debacle because his body of work far eclipses that. … He was a gifted metal sculptor,” said Michael Hill, the president of Chautauqua Institution, who worked with Poulin at St. Bonaventure University, where the latter served as an assistant professor in the Department of Visual and Performing Arts a department he helped to create.

“He was passionate and creative,” added Hill, who worked with Poulin during his tenure as the executive director of the Regina A. Quick Center for the Arts at the university. “He was an approachable and accomplished teacher. Students felt unbelievably comfortable instantly walking into his office and I think he was gifted in helping people unlock their own creativity. He was committed not only to his art but to his students and his projects. He’s just an all-around wonderful teacher and renaissance guy.”

“He was a hands-on, let’s get it done type of guy,” said Dr. Les Sabina, who was hired at the university the same year as Poulin and suceeded him as department chair. “I remember he said something like, ‘People are always telling me to think outside of the box’ and I have to think ‘inside the box’ and adapt in order to get funding for projects.’ He was not only a great artist but also a businessman.”

The business angle is where Len Barry, director of marketing and communications for the Reg Lenna Center for the Arts, encountered Poulin, who left academia in 1997 to open a studio, The Arts Center, on East First Street in the city.

“He was great to work with, great to talk to, and always trying to innovate and push the envelope,” he said. “While he could just shoot the breeze with you, most of the conversations were about pushing the art forward and supporting artists in the area and what more can be done by that. There wasn’t much wasted time and small talk. It was about the artistic community around here.

Poulin also worked closely with Barry as a the former Arts Council’s arts in education program.

“He understood the nuts and bolts of a situation and if he felt there was a better way of approaching the situation, he would tell you straight-up,” Barry said. “He was a good constructive critic. He helped me out as a program coordinator here and helped me improve my work because he was leading by example, but he was also like a professor one that would challenge with you and had the office door open to talk about things, but he would push you.”

The grant-funded program brought Poulin into elementary schools to talk about creativity and give students the opportunity to mold the clay that would later become a statue with a story chosen from their submitted essays.

“He really loved the storytelling aspect of his work as well,” Connie Poulin said. “When you look at any of his sculptures, they are telling a story and that’s what he loved doing the most. The projects in schools reflect that.”

He also had a knack for navigating his way through any situation, his wife remembered.

That trait came especially in handy when “Scary Lucy” became a national story. Poulin even offered to produce a new statue for free and suggested the village auction off the current one, still located in the park steps away from a new one, and donate the proceeds to charity.

“I was in Washington, D.C. working when I heard about the ‘Scary Lucy’ issue and my takeaway on that one was just how unfortunate the whole situation was,” said Hill, who owns a bronze statue of a ballet dancer that he received from Poulin 20 years ago. “That was probably among the most significant attention his work has received and yet it’s not at all indicative of the broader body of work that he created and I felt tremendous sadness on how that whole situation unfolded because it didn’t give him or his art the credit that it deserved.”

Barry, too, rushed to Poulin’s defense publicly in the wake of the controversy.

“I think it’s a bit unfair that, that’s what he became noted for,” Barry said. “There were a few of us who were publicly speaking as much as we could about all the stuff that he did and that certainly wasn’t out of his style or anything. That was his work. That’s how he made sculptures.”

Poulin never let the negative publicity regarding the statue deter him, his wife noted, and in recent years managed to find passion through his work as a welding instructor at career and technical education centers in Cattaraugus County and in Beaufort, South Carolina where he and his family relocated to three years ago.

“He had a passion for teaching, but he loved teaching CTE,” she said. “Kids who can go through a welding program or a building or trades program are underappreciated. So, he took his passion and skillset for welding and spent a few years at BOCES teaching welding. He had those skills and was such an outstanding teacher and became a big old dude in a welding shop teaching the trade of welding. It was the coolest thing.”

Barry will remember him as a “living example” of what living and working in this community should look like.

“He was a prolific artist, but also the best of what makes people like Dave important to a place like Jamestown, whether you’re a business leader or politician or an artist or a professional at a non-profit he was approachable,” he said. “Dave was a living example of that as someone who was approachable and talk on any level about what the industry was here in Jamestown and what the economic machine could be. He was a shining example of that and he was just one part of that, but I love that about our city: there aren’t too many walls that way.”

“I think looking at his life as a portfolio is far more important than looking at it as a single piece,” Hill added. “The body of work speaks to a man that was selfless in his teaching, creative in his creations and always believed that beauty was there to be unlocked. I hope that people look at Dave as a portfolio and not as a single piece of art.”

In the week since his passing, Connie Poulin has received dozens of messages filled with memories from throughout his life. But, one from a colleague of her husband’s at Beaufort County School District in South Carolina.

She added in her note to Poulin’s wife, “But, I just want you to know that he loved his life and he loved his family. You can’t say that about many people.”