Lucas Haight plays Thor in the Recovery Lounge’s production of “The Norwegians.”

Tyler Nichols drinks from a bottle of elderberry wine as he portrays a hitman and director of marketing in the Recovery Lounge’s production of “The Norwegians.” (Enterprise photo — Griffin Kelly) 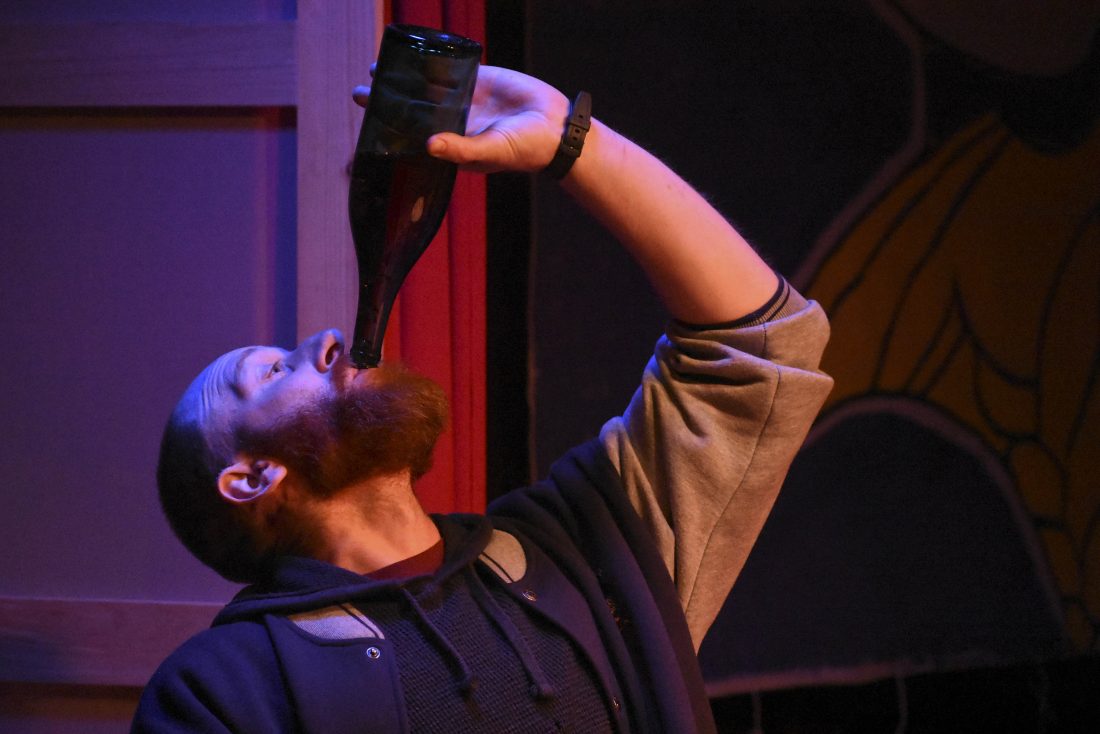 Tyler Nichols drinks from a bottle of elderberry wine as he portrays a hitman and director of marketing in the Recovery Lounge’s production of “The Norwegians.” (Enterprise photo — Griffin Kelly)

UPPER JAY — Uffda! Get ready for a tale of betrayal, murder and the 1991 World Series.

The Recovery Lounge will host a production of C. Denby Swanson’s “The Norwegians” this week.

The play follows two scorned women living in Minnesota — Olive from Texas and Betty from Kentucky — who enlist the help of strangely nice Norwegian hitmen to kill their exes.

“I thought it was funny and was a good play for winter,” said director Scott Renderer.

Tyler Nichols plays Gus, the muscle but also the director of marketing for his hitman business. He’s only part Norwegian, so his gruff, American personality is more apparent than Thor’s who is full Norwegian and played by Lucas Haight. Normally, when people think of hitmen, they imagine suave, silent and intimidating dudes like John Wick, Leon the Professional and Anton Chigurh (the guy with the cow killer from “No Country for Old Men”). Thor and Gus are environmentally-friendly, thank-you-card-sending, Twins- and Vikings-loving Norwegians. 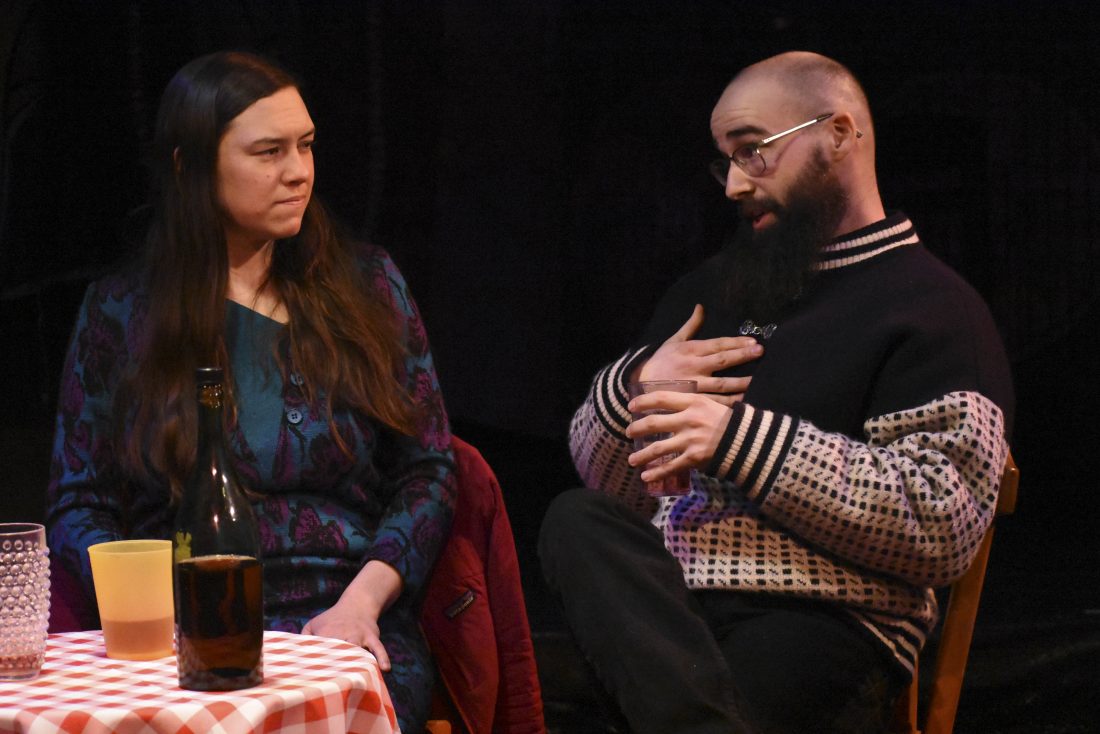 Haight said even though the characters are supposed to be Norwegian and from “Minnasoda,” he took his inspiration from North Country folk.

“There’s a similarity between how locals talk up here,” he said. “I think it has to do with the cold. You’re just kind of tight in your face and that dictates how things sound.”

Melissa Orzechowski plays Olive. This is her first performance outside of a Sunday school play in the sixth grade.

“Acting is something I’ve always wanted to do, but I just never had the time,” she said. “I really had no idea what to expect coming in. It was really cool to spend a lot of time with one text.” 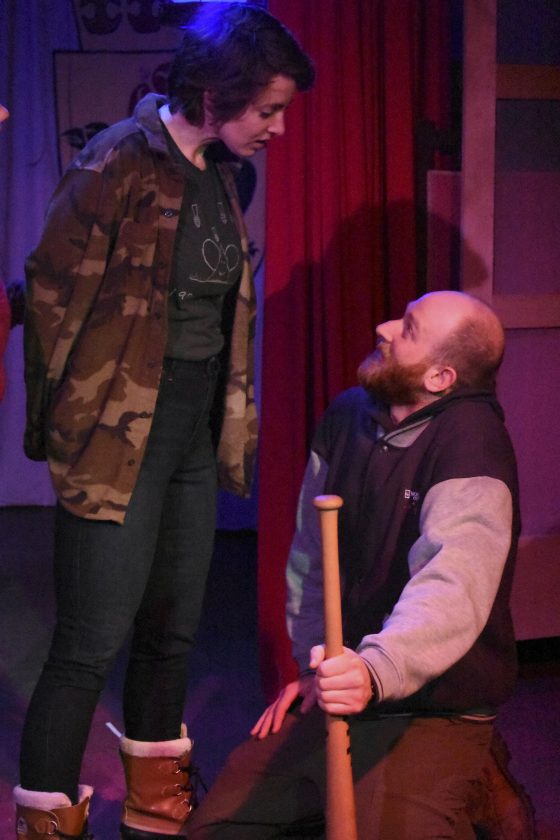 Orzechowski is a writer, but she said acting reminds her more of rock climbing than other artistic expressions.

“First off, they both take a lot of dedication, concentration and focus. It’s something you have to be really present in the moment for,” she said. “It can involve a lot of fears and anxieties, but you can’t let those get in the way. If that’s what you’re focusing on, you’re not going to be in the present with the other people who are on the stage.”

“You’re clipped into those other people, so if you fall, you’re taking them with you,” said Casey Galligan, who plays Betty. “There are a lot of life lessons in the theater. When you commit to other people, you’re accountable to them and yourself.”

“It’s not only a teaching opportunity, but it’s great for the community,” he said. “Regardless of how well people do, it’s always uplifting to see people that have never performed before on stage and want to try it. They have that opportunity here.” 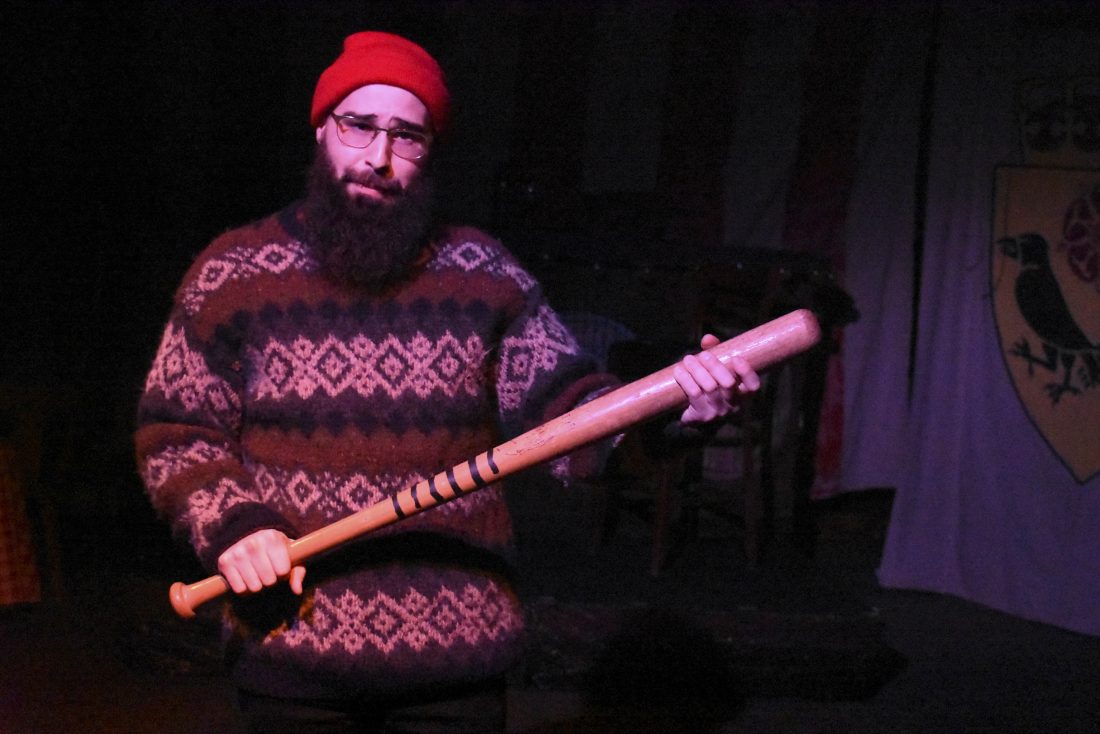 Lucas Haight plays Thor in the Recovery Lounge's production of "The Norwegians."

The ex-boyfriends in the show didn’t do anything particularly dastardly to Olive and Betty. Nothing illegal or malicious happened, but they did break the two women’s hearts, and that’s enough to get them killed. It’s hyperbolic, but there’s some human truth to that sentiment. Galligan said most people have probably gone through breakups where they wished the other person was dead.

“Everyone. If no one can say yes to that, then they’re not telling themselves the truth,” she said. “Wouldn’t that just be the easiest way to deal with a breakup?”

“I disagree,” Orzechowski said. “I’m friends with my exes. If they called me, I’d be like “Great, let’s hang out.”