Paying tribute . . . and the bills 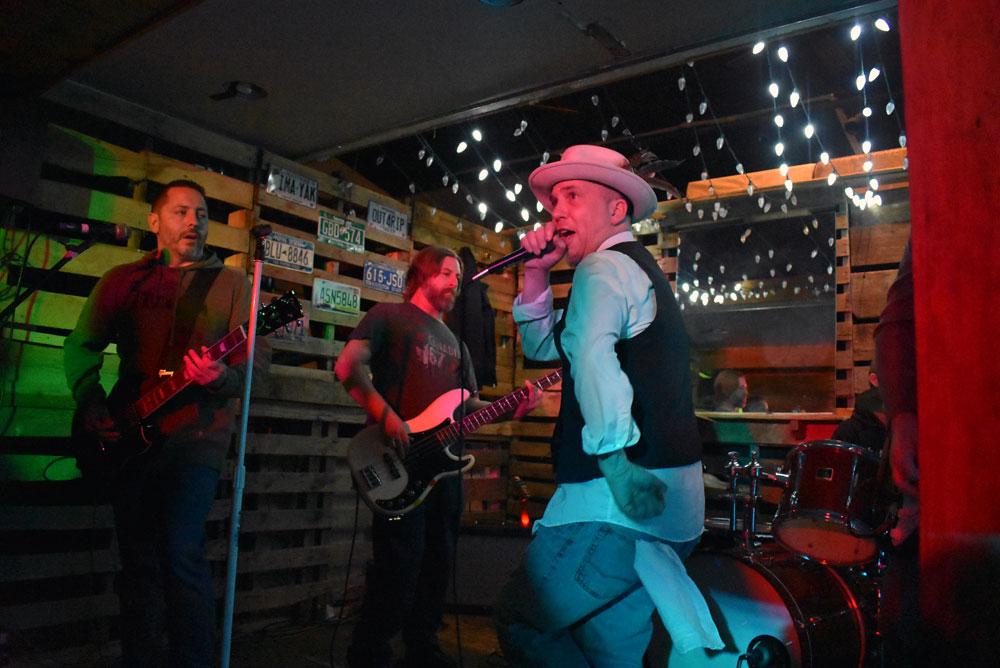 Notice: The Fully Completely Hip show that was scheduled for Friday at 9 p.m. at the Waterhole in Saranac Lake was canceled as of Wednesday. This week’s issue of the Weekender, which previewed the show as part of this report on tribute bands, had already gone to print on Tuesday.

SARANAC LAKE — Fully Completely Hip expertly play all the songs they cover from the jammy, alternative rock band they pay tribute to, but frontman Sean Harley likes to go all out for the performances and dress like Tragically Hip lead singer Gord Downie.

“Some of the guys in the band make fun of me because of it,” Harley said in a previous interview. “But yeah, Gord had a very eclectic style, so I do the whole thing — shiny pants, top hats, ‘Jaws’ T-shirts. I never thought I’d be carrying a wardrobe trunk to shows.

The Tragically Hip tribute band, Fully Completely Hip, will perform at the Waterhole in Saranac Lake at 9 p.m. Friday night.

Today, people can listen to virtually any piece of music online whether it’s from the album or a live performance. So what’s the allure of a tribute band? Why do musicians start these bands, why do venues book them and why do people appreciate them?

While the Waterhole mainly showcases original music, it does host the occasional tribute band — Into the Mystic (Van Morrison), the Lizards (Phish) and Small Change (Tom Waits) to name a few. And they’ve still got the Talking Heads tribute band Start Making Sense performing in December.

Waterhole owner Eric Munley, who also books bands for the venue, said when he first got into music programing, he was anti-tribute acts.

“As I’ve gotten to know the industry, I’ve become more interested in them and the high-quality musicians that do it,” he said. “There’s a difference between tribute bands and cover bands. Tribute bands are really trying to master a group’s repertoire, while a cover band might play music from a whole bunch of different bands and the level of quality might not be there.”

Munley said he sees tribute bands as a great way to have audiences experience groups that are no longer together and musicians who have died.

“The Talking Heads are never going to play again, so a band like Start Making Sense gives you that experience when you can’t hear the music in its original form anymore,” he said. “It’s also easy to sell tickets for music that audiences already know. When you start asking them to pay $10 for music they’ve never heard, that changes what they’ll pay to see.”

The Waterhole’s main focus is to support original acts paving their own way and developing their place in the music industry, but that can be an arduous process for bands, Munley said.

“It might take years to introduce a band to the market,” he said, “whereas many tribute bands come with a built-in fanbase, and it’s a good business model because you’ve got a lot of tribute bands where the members are still in original groups, too. The tribute band is a way to pay rent for them.

“It’s a way to get people in the door,” he continued. “It’s a long process building an original name, even with the internet and so many ways to hear music, it’s getting harder to get one name to stick. As a performer, it can be frustrating to be an original band working a lineup at a festival for years and then a tribute band gets a higher billing their first year.”

“We do it only every few years,” he said. “We don’t book many concerts throughout the year in general, so when we do bring in a live band, we’re looking to provide a really unique experience.”

Lemons said the LPCA gets a fair turnout when it hosts a tribute act.

“We’ll typically run half a house,” he said. “For us, they haven’t been high-capacity shows, and I guess that really depends on the group, but there’s a lot of other factors, too. The last tribute show we did was about three or four years ago. It was an Eagles tribute band called Hotel California. The cool thing about them was that they did Eagles songs, but they also played their own music and interpreted the music in really interesting ways.”

Scott Renderer books the music at the Recovery Lounge in Upper Jay. He said he prefers booking and seeing touring bands that play original music, but he’s open to tribute bands and what they can offer.

“I haven’t done it in the past because I feel like most tribute bands are hard rock and loud, which might be a little much for the Lounge,” he said. “Everybody plays a few covers at their shows, but I’m pretty committed to artists who play original music.”

He said he tends to associate tribute bands with parties and events rather than concerts and listening experiences.

Renderer does have a few tribute groups coming in soon, though. He’s planning to book a Johnny Cash tribute group for an upcoming event. He said he also wants to host Annie in the Water in January. They play original jam-rock music, but for the event at the Recovery Lounge, they’ll cover Fleetwood Mac’s “Rumors” album, Renderer said.

Another tribute-adjacent event Renderer books is the “28” series, an open mic night highlighting specific artists such as Bob Dylan and Joni Mitchell.

Yes, passion for a particular artist or band does fuel the idea of the tribute, but it’s also a business strategy. There’s a reason why “starving artists” is a common phrase thrown around in the music scene. Audiences like what they already know, and what they already know brings in money.

In a previous article, Justin Panigutti, who fronts the Van Morrison tribute band Into the Mystic based in Burlington, said he covers the Irish crooner to get people in the door before introducing them to his original work under the name the Justin Panigutti Band. He got the idea from the Sublime cover band, Badfish, who would open shows as Scotty Don’t.

Anthony D’Amato of the soul-pop group Remember Jones shared a similar sentiment before his group performed an Amy Winehouse tribute show at the Waterhole in October 2018, where they played the entirety of the album “Back to Black.” At other venues, they’ve also done Joe Cocker’s “Mad Dogs and Englishmen,” Jeff Buckley’s “Grace,” Kanye West’s “808 and Heartbreaks” and R. Kelly’s “Trapped in the Closet,” which they perform with a 20-piece orchestra.

“We had a bunch of sellout performances,” D’Amato said in 2018. “People were saying the name Remember Jones before they even knew really who it was, and I think it was because we had this special show with us.”

Again, this is a case of an original band performing somebody else’s work to pay the bills and showcase its own music to a new audience.

“I don’t think I would be touring the way I am if I didn’t have those (tribute shows),” D’Amato said. “I don’t think I’d be able to make money the way I’d make money if I didn’t have these experiences to call people in. Most talent buyers and venues that I work with, you know, at the end of the night say, ‘I’ve got to be honest, I loved the original thing more.’ That’s really where we want to be. That is us.”