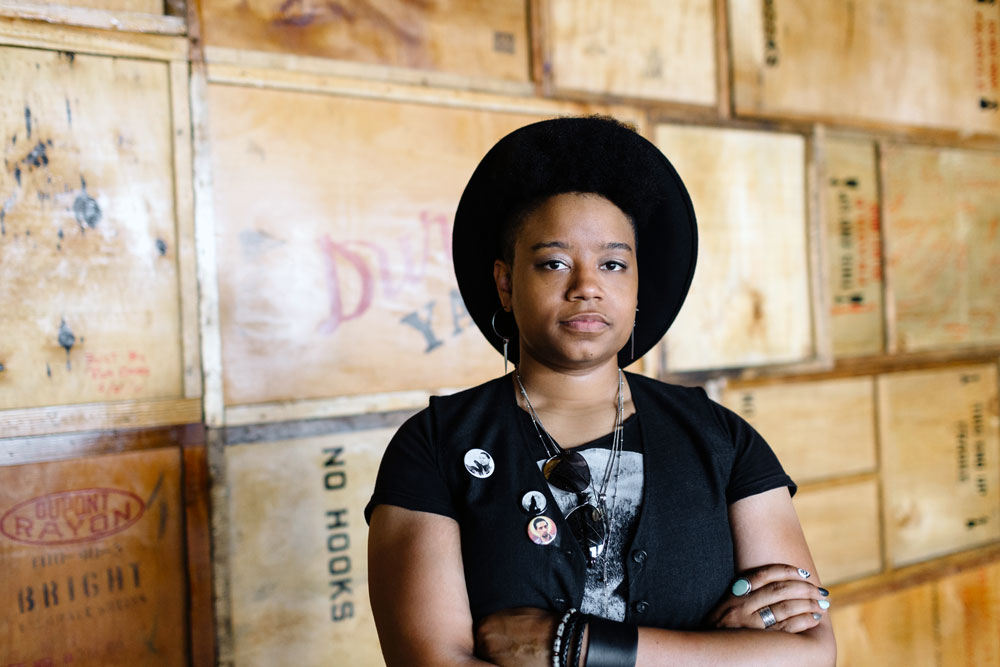 SARANAC LAKE — Amythyst Kiah wants to make music for everyone. She sees how genres and the history of music recording have separated people, and she wants to help change that.

“It’s best when you take what’s bothering you and put it into music so that the listener can feel like they can see themselves in the music,” she said. “Regardless if they’re gay or straight, Christian or Muslim, a man or a woman, their cultural background or socio-economic status, all of us feel pain. We all feel loss and grief.”

Influenced by the creators of American music, Kiah’s deep voice combined with her gritty and plucky guitar and banjo playing delivers a sound that stands all on its own. Occasionally, she’ll dive into classics such as “Jolene” and “Will the Circle Be Unbroken.”

At the start of her teenage years in Chattanooga County, Tennessee, Kiah was more of an athlete than a creative type. However, difficulties with social anxiety motivated her to find a different hobby other than team sports. She wanted something more solitary and cathartic, so her parents bought her a guitar. Kiah didn’t start her musical exploration with folk and traditional American music. Like most people growing up in the 1990s, she listened to bands like Nirvana, Radiohead and Tori Amos. She learned by ear and watching instructional VHS tapes.

“My mind tends to wander a lot, so it was good to have that structure,” she said. “It helped me focus.”

For the first couple of years, music was just a hobby for Kiah, an emotional release. Then her mother died when Kiah was 17. At the funeral, she sang an original song for her mother.

“There was kind of this moment when I saw how people were affected by the song,” she said. “It was more than just, ‘Oh, that’s so nice for your mother.'” There was actually some talent there, and I figured maybe I can do something with this. I also didn’t perform too much then, but if you can sing and play at your mom’s funeral, you can play anywhere.”

Kiah hasn’t recorded the song from the funeral and she probably never will, she said.

“It was for my mom, and recording it and putting it out there would kinda take away from its purpose,” she said. “I ended up writing another one for her that I recorded, so she’ll live on in other songs.”

After that, Kiah got inundated with the birth of rock, blues and country. She listened to pioneers such as the Carter Family, Reverend Gary Davis and Big Mama Thornton. She started to see the connection between those genres and the alternative rock from her youth.

“For me, traditional music is an important part of history that needs to be discussed and remembered, but the other part of it is that a lot of people continue to splinter music into different genres and groups when music should be for everybody,” she said. “Recording industries in early the 20th Century continued separating music into race records and hillbilly records. It makes some sense from a commercial and marketing standpoint, but when I play music, I like taking those fragments and putting them back together.”

This past summer, Kiah was the recipient of a Rainey Day Fund, funds raised for musicians from marginalized groups. The organization is named after Ma Rainey, an early African-American blues singer. It was done in partnership with Beehive Productions, which is based in Saranac Lake.

“It’s a good group because it helps highlight artists that may otherwise not get recognized,” she said. “Country music and Americana historically have been not as open to people of color and the LGBTQ communities. Americana has really opened the door and recognized those types of artists recently.”

In 2018, Kiah, collaborated with other black female folk artists Rhiannon Giddens of the Carolina Chocolate Drops, Allison Russell and Layla McCalla and created an album called “Songs of Our Native Daughters.” It was a project to highlight the struggle and persistence of black women in America from the 17th Century to the 19th Century.

“It’s a concept album that covers a lot of things at once,” Kiah said. “All the songs are based on artifacts we found at the National Museum of African American History and Culture. We looked at things like posters, documents, sheet music and old instruments such as the banjo, which was a west African instrument before anyone in America picked it up.”

Kiah said one of the focuses of the album was on the transatlantic slave trade because it was the foundation of discrimination and segregation.

“Even after it ended, the slave trade’s legacy still had people believing black people were inferior,” she said. “Starting at the slave trade, we can show how generations pass down fear and misunderstanding.”

One artifact that hit Kiah hard was an old photo of a black child holding a white baby.

“A third of the boats in the slave trade carried children,” she said. “It tells the story of being taken from your homeland and having your culture totally disregarded. I engaged with that in a very emotional and personal level.”

She said the music created at the start of America and what was passed down is not just black music and that anyone should be aware of it.

“This music is just as much part of the black experience as any other, and it’s American music,” she said. “It doesn’t belong to one race or another.”