‘With Sharpened Wings’ release party to be celebrated at the Waterhole 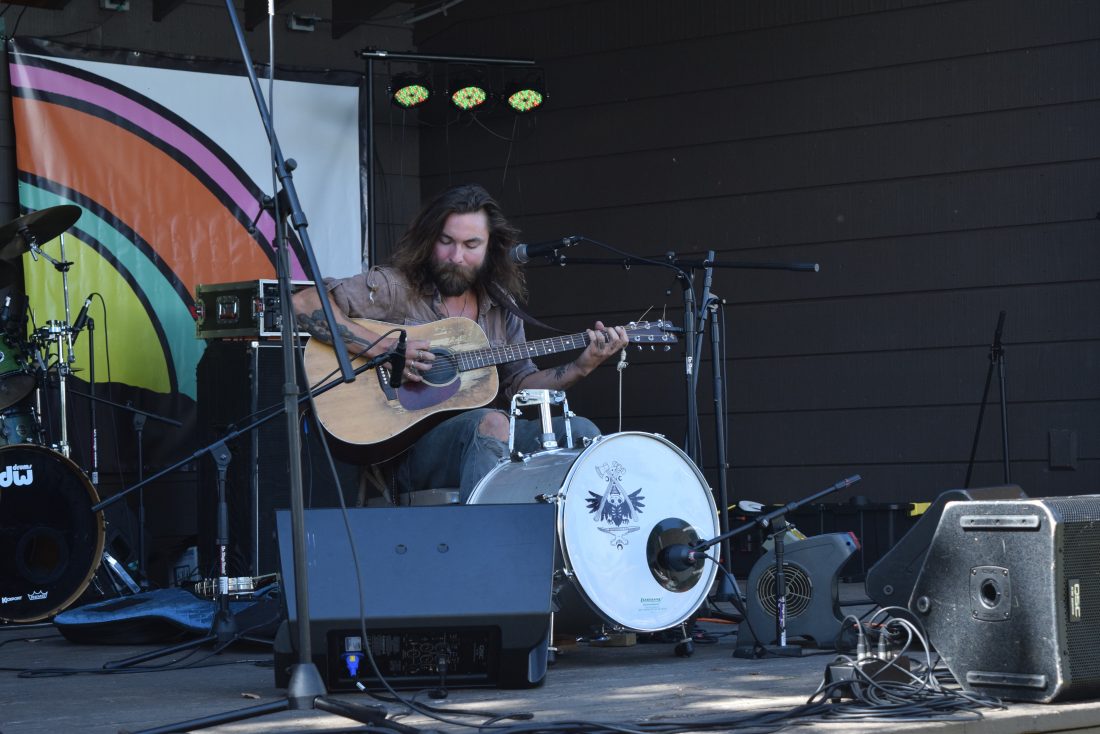 Arthur Buezo performs at the Northern Current music festival in Saranac Lake on Sunday, Sept. 1. There he played some of his older songs as well as songs yet to be released with the album. (Enterprise photo — Kevin Shea)

SARANAC LAKE — Arthur Buezo is releasing his new album, “With Sharpened Wings,” this week and will be bringing it home to the Waterhole Music Lounge on Saturday for a release party.

Buezo is now a full-fledged musician. He’s traveled the country performing, he’s in a band, and he even has his own genre of music. But the path forward wasn’t always certain.

For an entire year he was backpacking around the country. He train-hopped and was hitchhiking his way across the United States. He said he met many interesting people along his journey.

His mom told him to go to college. He knew of someone who went to Paul Smith’s College and decided to go there. In July 2009, he decided to make his way to the school.

But it didn’t pan out. After a semester-and-a-half, he grew sick of the early mornings and the regular routine. So he left, but chose to stick around Saranac Lake. With artists abound, he quickly fell in with a group at the Waterhole.

“It was just a bunch of people playing music at first,” Buezo said.

He had looked to play music at the local bars. The first one he went to turned him down, and that’s when he went to the Waterhole. He was welcomed into what is now known as the Blind Owl Band. The group consists of Christian Cardiello (bass, guitar), James Ford (banjo, vocals), and the man who now owns the Waterhole, Eric Munley (mandolin, vocals). They have three albums out and play at venues across the country.

During his time in the village, he started to develop his own sound. It was gruff, yet the sound and lyrics hearkened back to the days of early folk. He couldn’t find a suitable name.

“I love distortion, and I love yelling,” he said, “but I didn’t know what to call it or what to advertise it as.”

It was finally the band’s sound guy, Derek Borst, who came up with the genre name: Savage Folk.

Buezo still loves playing with the band, but he’s wanted to spend even more time with his music, and so a few years ago, he decided to work on his solo career.

He said it’s been rewarding to put in the hard work. It’s also necessary. He said that when you’re on your own, you have nowhere to hide. If you slack off, people will notice.

“So you’ve got to put your all in everything if you want to make it,” Buezo said.

The album is a representation of that hard work. It’s — in some ways — his first album. He’s put out “Alma,” but he considers that one less official. He considers “With Sharpened Wings” to be his first official album.

Buezo will have release parties at three locations next week. People at Abilene Bar & Lounge in Rochester will be able to see the official release Thursday. Another release party will be held Friday at Riverboat Bar in Alexandria Bay. The final showing of his new album will be held Saturday at the Waterhole at 9 p.m. The show will be free.

“I want the Waterhole to be part of that because it’s the growth of me as an individual and the music,” he said.

This is because the Waterhole has been like his runway, although it’s solely used for taking off.

He spent eight months touring the country, working on his album and playing the songs he already knew. Throughout the tour, he picked up something new in several of the states he wandered through and played different tunes and melodies with several instruments, including electric guitar, acoustic guitar, fiddle, banjo, bass, vocals, kick drum and tambourine. At the time, he wasn’t sure what song he was making or how it would sound; each bit was supposed to be for a different song, as the inspiration was different for each.

Then, a week before he was to go on and record his new album, he finally put it together. Each of the pieces, when layered over one another, formed one song. Buezo calls it “You Alone.” It’s the final song on his album, and it’s very special to him. He sees it as a showcase of his talents.

His work can be found on several platforms such as Spotify, but he said the best way is to get it from www.bandcamp.com.