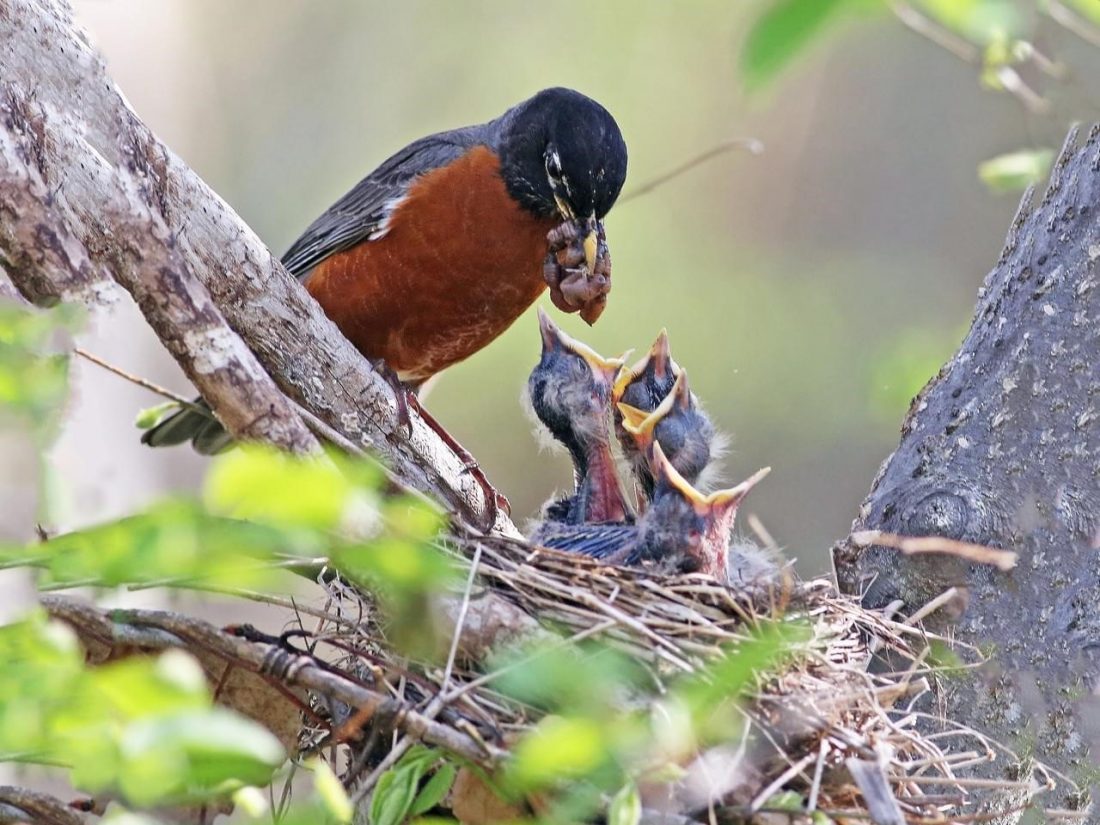 “The early bird catches the worm.” It’s an old adage that most likely refers to the American robin (Turdus Migratorius). This year, I first saw robins in late March, right around the time that maple sap started running. As I write this, they’re still showing up, almost daily, apparently looking for fly nymphs resting on the ice and snow alongside the river. Just up the road, they’re already hopping around on bare areas in lawns, gardens, fields, and pastures; cocking their heads from side to side as they try to find a big, fat, tasty worm to eat.

The sighting of robins, even before the snow has melted, is traditionally heralded as the first sign of spring. Their sharp chirps and clucks, whinny-like cries of alarm, and their more familiar song, cheer up cheerio cheery, signal not only the coming of spring, but the coming of the day, as well. Robins are territorial. And it’s the male robin we hear singing, often somewhat frantically, at dawn and again at dusk; singing to attract a mate and to claim, protect and defend its chosen territory. The size of that territory depends on availability of nesting sites, foliage, and food.

The American robin, or migratory thrush, is found throughout North America, with the exception of the extreme northernmost regions of Canada and Alaska. It’s the state bird of Connecticut, Michigan, and Wisconsin. In winter, it can be found as far south as Guatemala.

It’s not unusual for robins to return from southern wintering grounds before the last winter storm has arrived. In fact, in years of unusually mild winters, some robins don’t venture very far south at all. And, the belief that all robins migrate south for the winter, returning again in early spring, is not absolutely true. Like several people I know, many American Robins spend their summers here; then migrate to warmer states, like Florida, for the winter. But, they migrate because their preferred foods (fruits and berries) become unavailable; not to avoid the cold. If food supplies appear abundant, some robins will remain here throughout the winter. Should they decide to stay, they’re protected by a dense layer of loose, insulating down feathers, beneath long, overlapping outer feathers.

More often than not, robins will return to the same area every year. Males arrive first, with those arriving earliest able to select preferred locations for breeding. Females arrive a short time later and soon, mating begins. Often, the same male and female will mate for several consecutive years.

Once a male and a female have mated, nest building begins. Nests are built in shrubs and trees. They’re made of coarse grass, twigs, and reeds held together by mud, and lined with more grass and feathers. The male may assist, but the female is the nest builder; shaping it with her breast and wings while turning round and round.

Once the cup-shaped nest is built, the female will lay 3 to 5 light blue eggs, which will hatch in less than 2 weeks. Hatchlings will demand nearly constant feeding until they feather out (in about 14 to 16 days) and are able to leave the nest. The newly fledged young are unable to fly very competently, however, and are vulnerable to predator attack. Predators may steal robin eggs as well.

The male cares for the fledglings; feeding, training, and protecting them, while the female repairs damage to the nest or builds a new one and incubates a second clutch. When the fledged young are strong enough, they often roost communally. If food is plentiful, a third clutch is not unusual. Breeding generally ends in late July.

As the fledglings grow to become young robins, they appear speckled with white throats and pale cinnamon to white colored breasts and underbellies. In late summer, they molt and then display colors that more closely resemble those of adults. During the following spring, after their first mating, they’ll molt again and finally show their adult plumage.

Throughout the breeding season, robins feed on earthworms, insects, grubs, snails, and small snakes. But once the breeding season is over, they become vegetarians. Large flocks of birds search for berries, cherries, grapes, and other fruits. And the males stop singing. You’ll still hear both males and females clucking, chattering and calling to one another however, especially when they sense danger.

By early fall, as the days grow shorter and the north wind begins to blow, many will begin their southward migration.

Until about a century ago, a plump, juicy robin was considered a delicacy, especially in the South, where hunters harvested birds from wintering flocks and often sold them at market. They were also raised in cages and treasured as domesticated songbirds. Today, most people consider the American Robin to be just another bird. The robin’s song however, remains a most welcome sign of spring.