We are all equal in the eyes of a fish 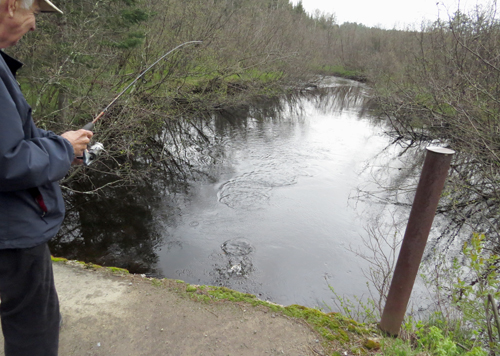 Ken Seymour has been visiting this same fishing hole for more than 70 years, and the little brook continues to provide enough fish for a regular meal. (Photo — Joe Hackett)

The burgeoning spring season has rapidly reclaimed the local landscape, bringing blooming wildflowers, fresh fish and a wide variety of outdoor recreational opportunities. Although the mountain trails remain muddy and the waters remain dangerously cold, trout, salmon, pike, bass and panfish are now on the take.

On the hunt, the annual spring wild turkey season will continue through the end of the month.

Fortunately, there are still a wide range of recreational options that are available for those who don’t want to camp, hunt, fish, paddle, pedal or climb. The spring season also provides birders with outstanding opportunities to practice their craft, and potentially add new species to their life lists of birds sighted.

In many ways, birders are no different than waterfowlers or upland game hunters. Both groups study their quarry to learn the habits, habitat and courtship rituals of their prey. It’s likely both groups also share the thrill of “bagging a bird.” I expect the thrill of the hunt remains the same regardless of whether the take eventually ends up on a life list or in the oven.

Although I am not a trained birder, I do to enjoy listening to the drumming of grouse or watching a turkey all puffed up and strutting. And I always marvel at the late day dance of the timberdoodle (woodcock), which includes unique twittering conversations between the long-beaked birds and some amazing aerial acrobatics that conclude with the male dropping out of the sky in a tumbling, death-defying freefall. Just as it appears the bird is about to crash on the ground, it spreads wings and flies off safely … but not always.

Last year, I witnessed the death of a freefalling woodcock. Instead of pulling out of the tumbling display at the last second, it thudded on the ground, dead.

The unintended calamity appeared to have little consequence on the rest of the flock, as they continued to twitter and tumble and drop from the sky in the fading light of day.

In addition to angling for trout and watching birds and wildlife, the spring season ushers in a return to the waters for anglers, paddlers, rowers and boaters of all sorts.

It is important to wear a PFD whenever you’re on the water. I continue to “tie one on,” until water temperatures are in the 70s.

Currently, the water clarity is excellent on the east and west branches of the AuSable River, as well as on the Boquet’s north branch and most of the smaller brooks.

Flies are in the air and anglers are in and on the waters. Although the local lakes and ponds have been open for almost a month, traffic has been relatively light to date.

During a recent foray through the St. Regis Canoe Area, I encountered fewer than a dozen boaters. I was often the only angler on many of the smaller ponds. Not that I’m complaining; when I fish alone, I’m always in good company.

Although I have not spent a full day on the river, I have enjoyed some outstanding action on the small streams and beaver flows. Ordinarily, the small, backwoods brooks don’t provide much activity until mid-summer, but I was delighted to discover they are already producing.

While most specimens rarely top a foot in length, the true charm is the lack of pressure, the wild surroundings and the solitude. I’d rather spend a day catching a batch of 8- to 12-inch brookies than landing a few lunkers. In my eyes, quantity will always trump quality.

Although I like to keep a few for the dinner table, I fish for the experience, the scenery, the solitude and the natural surprises. It is a pursuit that offers far more intangible benefits than could ever be stuffed in a creel.

In a sense I fish for my youth, in hopes of capturing the thrill and memories of the past.

Sport for the ages

I recently had an opportunity to witness the inclusiveness of angling. It is a pursuit that seemingly knows no boundaries or borders. We are all equal before the fish. They will take or refuse our offerrings regardless of age, race, gender or political bent.

I’ve witnessed a 7-year-old worm dunker share his take with a pair of sophisticated flyfishers who were decked out in the finest Abercrombie duds with complete outfits from Orvis. Despite the apparent economic, social and age differences, their shared passion for fishing was a link that spanned the generations.

Anglers come in all size and shapes. Some are completely able and capable, while many other require assistance. But to a man, woman, girl or boy, angling is a sport that does not require a referee, a timekeeper or a marked playing field.

This notion was confirmed on a local stream that I recently shared with an 81-year-old angler and a pair of young anglers with a combined age that was still a single digit.

Saranac Lake native Ken Seymour, the elder angler, is a sprightly 81-year-old retiree who has been fishing all of his life. It came to him naturally, as his father worked as a lock-keeper on the Saranacs.

The younger angler, Bowie Conway, is the older half of the Conway boys from Saranac Lake. Despite the disparity in age, experience and angling prowess, the anglers were treated to a nearly identical angling experience by the resident brook trout.

The counterparts were each tossing an earthworm on their hooks and trout gulped them down with equal fevor. Although Mr. Seymour certainly had a distinct advantage in both age and angling experience, the trout were not impressed, and they feasted on the offerings equally.