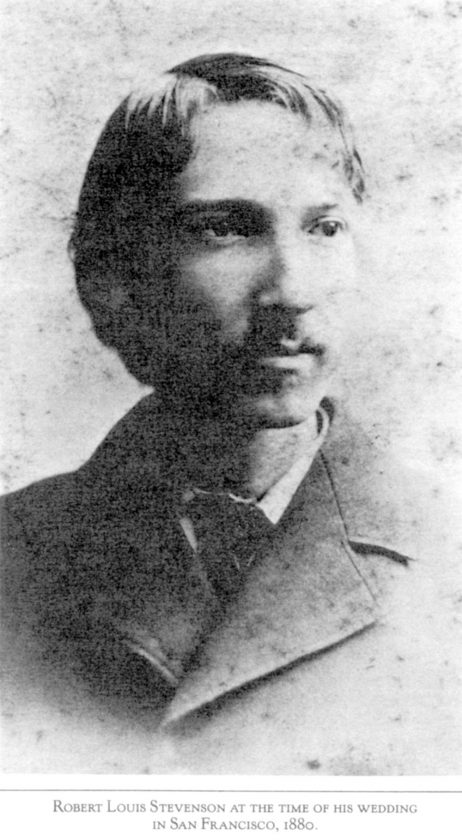 “I shall be married early in May and then go to the mountains, a very withered bridegroom.”

“Bloody Jack” was Robert Louis Stevenson’s personification of his sometimes life-threatening lung hemorrhaging condition. It was presumed to be consumption, or TB, by RLS and his circle, though positive diagnosis of the disease in 1880 was still out of reach.

By 1887, science had prevailed, and it was Dr. E.L. Trudeau in Saranac Lake who would get to surprise everybody when he declared that the author of “Treasure Island” did NOT have the so-called “white death” after all. When his end finally came it would be cerebral hemorrhage that would claim the “Penny Piper of Saranac.” Medical hindsight enables experts today to say that Stevenson suffered from some thing or things altogether different from tuberculosis.

But sickness is still sickness by any name. The debut of “Bloody Jack” had spurred Stevenson’s fiancee, the newly divorced Fanny Vandegrift Osbourne, into action. She moved her Lou from 608 Bush St. in San Francisco, to Tubbs Hotel in East Oakland, conveniently close to her cottage as well as the next doctor in line to treat the amateur emigrant from Scotland. From Tubbs Hotel, RLS wrote again to his friend in England, Edmund Gosse, who would get to brag in old age that he was a member of the Stevenson Society of America in Saranac Lake:

“My dear Gosse … how near I have been to another world. For about six weeks I had been in utter doubt; it was a toss up for life or death all that time; but I won the toss, sir, and Hades went off once more discomfited. This is not the first time, nor will be the last, that I have a friendly game with that gentleman; I know he will end by cleaning me out. … I have been very, very sick; on the verge of a galloping consumption, cold sweats, prostrating attacks of cough, sinking fits in which I lose the power of speech, fever, and all the ugliest circumstances of the disease; and I have cause to bless God, my wife that is to be, and one Dr. Bamford that I have come out of all this, and got my feet once more upon a little hill-top, with a fair prospect of life and some new desire of living.”

Dr. William Bamford was English but educated in Canada. In gratitude, RLS gave him a copy of his second book, “Travels With a Donkey in the Cevennes,” in which he wrote, “May you not dislike it, for it will be your own handiwork if there are other fruits from the same tree! But for your kindness and skill, this would have been my last book.”

But it wasn’t. April showers bring May flowers in California, too, where in May 1880, Stevenson’s death-defying quest to find Mrs. Fanny Stevenson was finally bearing fruit. From Tubbs Hotel, Fanny took the patient to her cottage, where he would spend his last days as a bachelor convalescing in a structure that had been shipped in pieces to California via Cape Horn. Fanny’s sister Nellie was there to help, and Louis would take Spanish lessons with her, a reasonable ambition for Nellie, who was about to marry Adolpho Sanchez, a saloon keeper in Monterey.

Just because he had nearly died wasn’t enough to keep RLS from pushing his pen around on paper, except that it did. From his sick bed, Louis had to resort for the first time to an amanuensis, a fancy word for someone who takes dictation. Nellie and Fanny took turns, and 14 years later it would be Belle’s turn to perform the service again when her stepfather’s days were numbered at his island home halfway around the world.

Belle, Fanny’s daughter, said in her book, “This Life I’ve Loved,” that “Fanny Osbourne married Louis not expecting that he would live, but hoping by her devotion to prolong this life now so dear to her. …Though she admired his work she had no idea he would ever become famous.”

Nellie, in her book “The Violent Friend,” wrote, “When I recall the sleepless care with which Mrs. Stevenson watched over him at that critical point in his life, it seems to me that it is not too much to say that the world owes it to her that he lived to produce his best works.”

Fanny had risen to the occasion. She would be wife and nurse, even literary critic, to RLS and her strategically written letters to the invalid’s mother would melt the latter’s heart, even her husband’s, to the point of caving in and accepting a situation that Thomas Stevenson had branded as “this sinful, mad business.” And so it was that one day in May, Louis received a cable from his parents: “Count on 250 lbs annually.” Louis had to give up on his immediate goal, to somehow support himself and his secondhand family by his writing, but at least the incoming money would be advanced against his inheritance, which made him feel a little less like a welfare case.

As time passed and the weather improved, so did the health of Robert Louis Stevenson, and May 19 had been chosen as a good day for a wedding. The week before that, Louis, Fanny and Nellie had taken the ferry across the Bay to treat themselves to a performance of Gilbert and Sullivan’s “The Pirates of Penzance,” and Nellie wrote that “Louis said the London ‘bobbies’ were true to life.” Louis must have felt like he was on Mount Olympus. The hero had survived the journey and was ready to claim his prize, and his parents hadn’t disowned him after all.