Pickling your own cucumbers at home 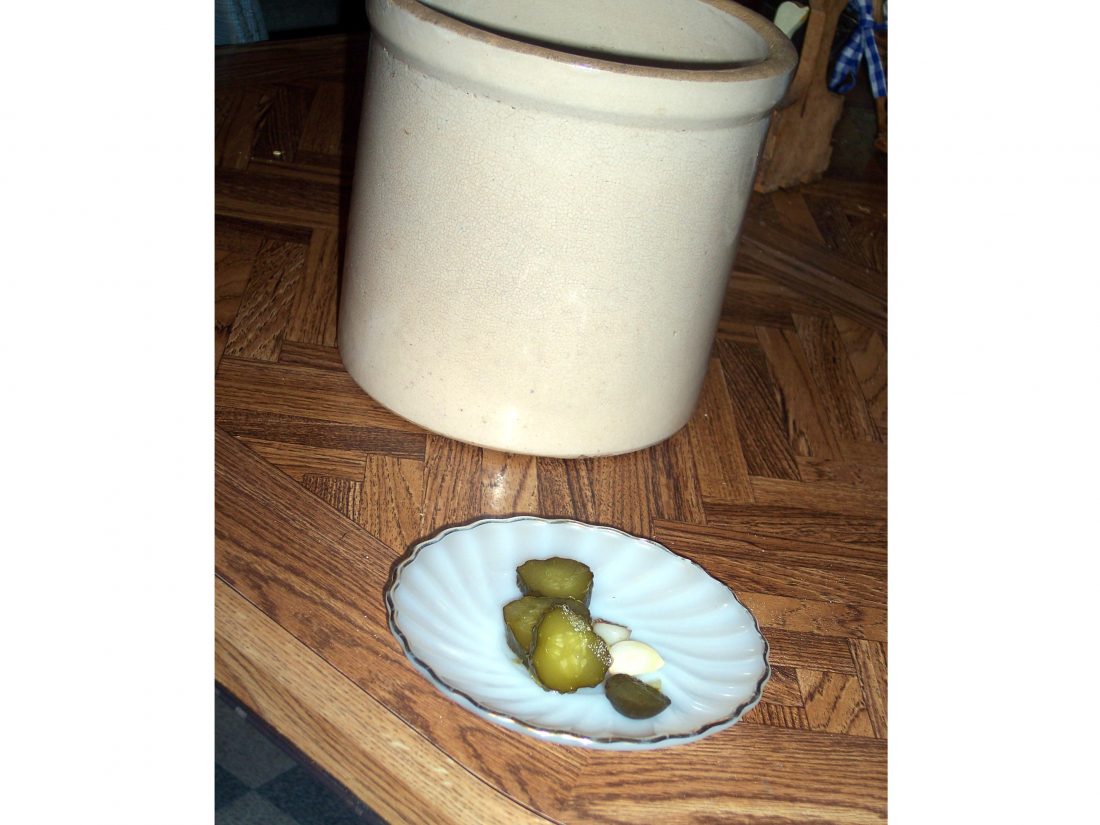 Americans love pickles. According to Pickle Packers International, we each consume on average 106 pickles (about 9 pounds) per person per year.

The word “pickle” was first used to indicate preservation of foods in brine. Later, it also came to include preservation in vinegar. While we generally refer to salt-cured cucumbers as pickles, almost any vegetable or fruit can be pickled and preserved in a salt brine solution.

Today there are many types of pickled cucumbers, depending on how they’re flavored, how they’re pickled (brine versus vinegar) and how they’re cut. The most popular, dill pickles, are cucumbers seasoned with the herb dill during the brining process. Kosher dills are seasoned with garlic in addition to dill. Sour or half-sour pickles are brined without the addition of vinegar and are usually kept under refrigeration. Half-sour pickles keep their fresh cucumber color and crisp texture. Sweet pickles are packed in a sweet mixture of vinegar, sugar and spices. Variations are bread and butter, candied, and sweet hot.

Foods have been pickled in salt brine for thousands of years and in many cultures, from the Far East (Korean kimchi) to northern Europe. Before refrigeration, this is how foods were preserved for long journeys or long winters, when pickles and sauerkraut were often the only vegetables available.

Nowhere, however, are brine-pickled vegetables as integral to the diet as in Mediterranean and Middle Eastern cuisine, where pickles are an essential accompaniment to any meal – and almost any vegetable is pickled. Mid-Eastern pickles include not just cucumbers but eggplant, zucchini, carrots, chilies, garlic, cauliflower, turnips, okra and green beans. These pickled veggies are served at meals in combination and called hamucim, meaning “sours.”

Cucumbers were one of the earliest salt-preserved foods. Native to India, they were brought to Mesopotamia and the Tigris Valley around 2030 B.C. There, they were first preserved and eaten as pickles. Later, they made their way to the Roman Empire. The Romans adopted many foods from the countries they conquered, pickling them for the long trip in brine, vinegar, oil, and sometimes, honey. It is not certain whether the art of vegetable brining and pickling came to Europe through Roman conquests, by way of the Jewish Diaspora, or with the Ottoman conquests of southern Europe and Arab settlements in Spain. But it is fact that by the 16th century, pickles were prized as a fine food delicacy in Holland. The first commercially packaged pickles were sold in 1820 by Frenchman Nicholas Appert.

Pickles arrived in the New World with European colonists. George Washington, John Adams and Dolly Madison were all known to be fond of them. Thomas Jefferson is quoted as saying, “On a hot day in Virginia, I know nothing more comforting than a fine spiced pickle, brought up trout-like from the sparkling depths of the aromatic jar below the stairs of Aunt Sally’s cellar.”

Tart, fermented foods like pickles are not only delicious, they are very healthy, because the brining process makes them more digestible and more nutritious. The beneficial effects of pickled cucumbers have been known for thousands of years. Aristotle praised their healing effects, and Julius Caesar shared them with his legions for their invigorating effect. Much later, Napoleon also used pickles a health food for his armies.

Modern scientific studies have confirmed the health benefits of fermented foods. Today we know that foods preserved this way are probiotic; that is, they contain live bacteria that aid proper digestion and immune function. Lactobacillus, the bacteria responsible for lactic acid fermentation or pickling, is one of the best-known probiotics. The World Health Organization defines probiotic as ‘live microorganisms which, when administered in adequate amounts, confer a health benefit on the host.’

These bacteria strengthen your immune system by creating lactic acid, thus changing the chemical balance in the gut and helping to maintain a healthy population of micro-flora in the intestines. (A healthy adult gastrointestinal tract contains over two pounds of micro-flora.) These micro-flora cover the inner lining of the small intestine and produce antibiotics and bacteriocins, inhibiting pathogenic organisms like E.coli, salmonella and an excess of yeast (candida). And pickles are also low in calories (the average dill pickle has just 15) and high in nutrients and vitamins.

In order to do their important job, however, the cultures in lacto-fermented foods must be alive. These important intestinal flora are decimated by our modern lifestyle: use of antibiotics, a diet of highly processed foods, meat laced with antibiotic residues, and chlorinated water. Store-bought fermented foods are often pasteurized, a process that kills these beneficial microorganisms.

The process of brining is a combination of osmosis and lactic acid fermentation. First, the salt draws moisture out of the food by osmosis. The brine solution thus created triggers the lactic bacteria to begin fermenting the food, lowering the pH. This prevents the growth of pathogens and other bacteria that would cause the food to spoil. It is important to remember that this fermentation process is anaerobic – that is, occurring without oxygen. For this reason, the vegetable must be totally submerged in liquid, so that air cannot penetrate.

The beneficial microbes that ferment food by producing lactic acid give pickles their sour taste. Other byproducts of fermentation also add flavor. Spices, like dill, garlic or cumin, are added to vary the taste of pickles, creating a spectrum of flavors. Salt also hardens the pectins in the vegetables, making them crunchy. For extra crunch, many people add a few grape, oak, horseradish, currant or cherry leaves to the brine.

Making your own pickles isn’t hard, as long as you remember certain principles. Most cucumbers sold in the supermarket have been waxed to keep them fresh, and the brine will not penetrate the wax. So buy fresh from local farmers – or grow your own. The type of salt is also important; regular table salt contains additives to prevent caking and cannot be used for pickling. Instead, use pickling salt or kosher salt, which are pure. Always check the ingredients to make sure other things, like sugar (dextrose) are not added. Do not use metal containers, because both salt and the acids created by fermentation will corrode them. A stone or ceramic crock or glass jars with a wide top work well. In the old days, oak barrels were commonly used.

In addition to cucumbers and cabbage, almost any vegetable can be fermented. It is crucial to make sure that it is completely submerged in liquid, with no air access. Cucumbers tend to float to the top; if they’re exposed to air, they will mold and spoil. This is why cylindrical containers, like round crocks or wide-mouth glass jars, are best: It is easy to place a plate that just fits inside the crock, and weigh it down by a rock or a jug of water so that the liquid brine submerges it. Another way to do this is to weigh the vegetables down with water in a double layer of plastic bags. The water will spread, covering the entire surface and keeping the vegetables submerged.

Here is a recipe for making kosher dill pickles. On Saturday, Sept. 28, at the Paul Smith’s VIC 8th annual Adirondack Homesteading Festival, you will be able to learn about food preservation, including fermenting cucumbers to make pickles. And there are many other activities taking place as well!

Wash cucumbers well to remove soil. Cut 1/16 of an inch off the bottom to remove the blossom end, which can cause softening. To each quart jar, add 2 teaspoons dill seeds or pickling spice, 1 bay leaf, 2 cloves garlic, and 1 or 2 teaspoons each peppercorns and allspice. Pack cucumbers tightly in jars or crock.

Bring water with salt to boil, cook 3 minutes and cool. Pour over cucumbers, and weigh down so they are not exposed to air. Keep in room temperature and out of direct sunlight for 4 – 5 days, then refrigerate or store in cool place. Cooler temperatures will cause them to cure slower, but will yield a crisper product.

Check the container several times a week. The fermenting process may cause the brine to bubble and overflow the container. Also, scum may form on top; if this happens, just skim it off. The pickles are ready when they are olive green in color.

Author of the award-winning cookbook Garden Gourmet: Fresh & Fabulous Meals from your Garden, CSA or Farmers’ Market, Yvona Fast lives in Lake Clear and has two passions: cooking and writing. She can be reached at www.wordsaremyworld.com or on Facebook as Author Yvona Fast.