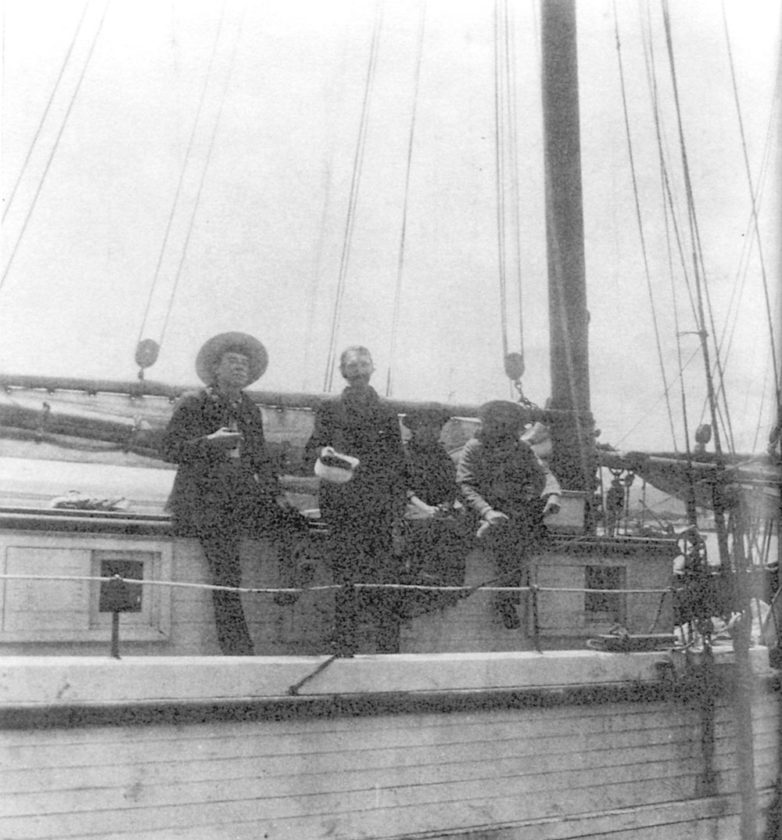 For three days in the dead of winter 1917, the stepchildren of Robert Louis Stevenson, namely Lloyd Osbourne and Mrs. Isobel Field, were honored guests in the mountain village the author once called his “little Switzerland in the Adirondacks,” which is Saranac Lake.

For Lloyd, it was a trip down memory lane, drifting back 30 years to the six and a half months he had been a tenant at Baker’s, having a room with a view on the upper floor all to himself. Lloyd was nineteen then and at that time his older sister Isobel, or ‘Belle,’ was passing time in Hawaii with her first husband, Joe Strong, an artist, and their son of five years, Austin.

The account of their three-day stay in the village was reported on in the Saranac Lake News on Feb. 8, 1917, from which the following extracts are taken:

“Mr. and Mrs. Osbourne and Mrs. Field arrived Saturday morning. It was one of the bitterest days of the winter and somewhat in keeping with the tradition of ‘Stevenson weather.’ Their first duty, after putting up at the St. Regis, was to call upon Mr. and Mrs. Baker. The meeting of Mr. Osbourne with his hosts of 30 years ago was very touching. Mrs. Field was never in Saranac Lake with the family in the old days but she recognized Mount Baker and the cottage and all that she found here as if she had always known Saranac Lake.”

“‘Mr. Stevenson told me so much about Saranac Lake that I do not feel I am meeting strangers,’ she said to Mrs. Baker, and later, when over one hundred persons assembled at the library to meet the visitors, she remarked that ‘those who can so honor the memory of Louis are all dear friends of mine.'”

“This tea was served before the old fireplace about which R.L.S. wrote the poem ‘Winter,’ beginning ‘Lo, by the hearth, the laughter of the logs.’ On this modern occasion the logs laughed again while those who had known R.L.S. when he occupied the now empty armchair told stories of him which have never been printed. Mrs. Field, who, as amanuensis, had the greatest opportunity to study Robert Louis in the intimacy of literary creation, was the chief raconteur.”

“The glowing logs reminded her how ‘Louis’ found the plot of The Sire de Maletroit’s Door in the dancing images of a coal fire. One reminiscence led to another and another; how it was Mrs. Stevenson (Mrs. Field’s mother) who wrote that part of ‘Jekyll and Hyde’ where the evil Hyde trampled the child in the street…”

Anything Lloyd might have injected into that fireside chat apparently stayed at Baker’s because his talking sister was the only sibling quoted in the text. Maybe he wasn’t even listening. It’s easy to speculate about the memories that could have flooded Lloyd’s mind as he found himself once again caught in the glow of the flames dancing in Baker’s fireplace, those “flowers of the fire” in Stevenson’s short poem Winter, put to paper in that very space. Thirty years had passed since that harsh winter when the room he was seated in had been the temporary center of the universe for the band of five we call, for convenience, the Stevenson expedition. Lloyd Osbourne and his mother and R.L. Stevenson and his mother, along with their portable Swiss servant, Valentine Roche, were its members.

Perhaps the most natural way to picture Stevenson in Saranac Lake is the way Dr. Trudeau usually found him on his calls, “with his feet to the fire and a cigarette in his mouth.” Trudeau was only one of many visitors who crossed the threshold of the ‘Hunter’s Home’ that winter and didn’t leave without sitting for a spell under the spell of a great talker who even wrote an essay called Talk and Talkers. Trudeau, like the rest, found Stevenson “so attractive in conversation that I found myself, as it was growing dark, very often seated by the big fireplace in the Baker Cottage having a talk with my illustrious patient.”

Stevenson’s gift for gab came along with “a wonderful reading voice,” according to Mr. Osbourne in his address (read by proxy) at the unveiling of the memorial plaque at Baker’s Cottage on Oct. 30, 1915.

“I have never heard anyone who could equal him; in listening to him one was stirred by an indescribable sense of romance, of emotion, of the heartstrings being played upon. In the long winter evenings in Saranac, Stevenson read aloud Othello, The Tempest, Julius Caesar and Macbeth; read them with mantling face and increasing enthusiasm till the old room seemed to disappear in the glittering pageantry and matchless, swelling periods of Shakespeare.”

One can wonder if Lloyd’s close proximity to this great communicator ever desensitized him to Stevenson’s peculiar vocal skills. Probably not. In fact, Lloyd had come to understand that writing was the way in which RLS had turned his conversation into something permanent and profitable. Will Low, a very close friend of the author and former president of the Stevenson Society in Saranac Lake nailed it when he said in his own book, A Chronicle of Friendships:

“His talk (RLS), shorn of much of its exuberance compressed to solidity, and in the process becoming tangible, lives for us on the printed page.”

About a year before the Stevenson expedition wound up in these mountains, Lloyd Osbourne, in 1886, had dropped out of the University of Bournemouth, England. He had learned to appreciate the power of the written word and decided to write too, and who better to teach him than Louis. After a few false starts, Lloyd’s efforts began to pay off in Saranac Lake. Five years had passed since the firm of Samuel Lloyd Osbourne and Co. had published “Moral Emblems” with that toy press in Switzerland. Lloyd was still the gadget guy and he brought with him to Baker’s his first typewriter. He liked to use it in the sitting room between the stove and the fireplace. In one of his letters to Henry James, RLS said:

“As I write, the sun (which has long been a stranger) shines in at my shoulder; from the next room, the bell of Lloyd’s typewriter makes an agreeable music as it patters off the early chapters of a humorous romance …”

“The Wrong Box” was first called “A Game of Bluff” and before that “The Finsbury Tontine.” The plot involved a mismanaged trust fund and the inconvenience of a reappearing coffin. Captivated yet again by one of Lloyd’s ideas, Louis wanted in and what came out of it was the first of three novels the duo would co-author. Stevenson’s mother saw it all happen and she made sure her sister in Scotland knew about, too. ‘Maggie’ wrote to Jane Balfour that:

“Louis and Lloyd breakfast rather early and work until lunch time. When they write in the sitting room, I keep up the fire in the stove and stay in my own room, which is very bright and cheery. If I want to go out without disturbing the two authors, I get out by the window …”

“The Wrong Box,” like Stevenson’s wife, had fans and detractors. One critic said, “I like it,” while another said it was “calamitous.” Non-readers can judge for themselves if they take in the movie, “The Wrong Box” (1966). Filmed in Technicolor in Bournemouth, England, it has a large cast with some notable names, including Michael Caine, Nanette Newman, Dudley Moor, Ralph Richardson, Peter Sellers, and John Mills.

By the time “The Wrong Box” hit the market in 1889, the Stevenson expedition was long gone, having traded Baker’s sitting room for the deck of the trading schooner Equator, below the equator in the very warm, sunny South Pacific archipelago.