Neutron stars and a new era in astronomy 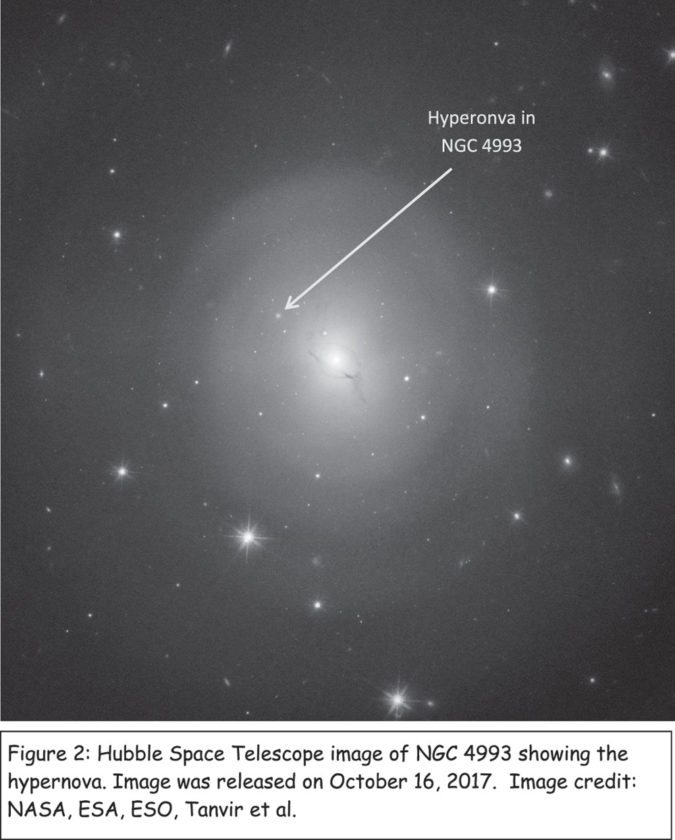 Yes, summer is coming at about 68,800 mph as Earth swings past its closest point to the sun tonight. This close approach, perihelion, will occur at 12:35 a.m. tomorrow morning. Earth’s closeness to the sun maximizes the gravitational tug of our local star and causes the orbital speed to be greatest at perihelion. As Earth then moves away, toward its aphelion on July 6. it will slow to 65,500 mph. This change in speed accounts for the different lengths of the winter and summer. There will be 179 days between the Autumnal Equinox of 2017 and the Vernal Equinox of 2018. But between the Vernal Equinox and Autumnal Equinox of 2018 there will be 186 days. So we get about 5.5 more days of warm seasons than the southern hemisphere does. That’s why August has more days than February!

As we anticipate earlier dawns, I want to tell you of an extraordinary dawn in astronomy last August when we entered the Era of Multimessenger Astronomy.

The first beam of this new dawn occurred at 8:41:04 a.m. EDT on Aug. 17, 2017. And this first beam was, amazingly, not light at all! In fact, it was not an electromagnetic wave: not light, infrared, ultraviolet, radio, X-ray or gamma ray waves. It was a type of wave we first detected on Sept. 14, 2015: a gravitational wave. But 1.7 seconds later, the Fermi Gamma Ray Telescope detected a gamma ray burst from the same location. For the first time in human history, we have information about a cosmic event from two completely different messengers: gravity and electromagnetic radiation. In the following weeks, 70 telescopes capable of detecting all bands of the electromagnetic spectrum observed the aftermath of the event. Figure 1 shows two images in visible light taken four days apart at the Las Campanas Observatory in Chile by a team from the University of California-Santa Cruz. Figure 2 shows a higher resolution image of the galaxy made later by the Hubble Space Telescope. The event was brighter than the supernova explosions of giant stars or white dwarf stars exceeding the Chandrasekar limit. It was named a hypernova and resulted from the merger of two neutron stars with a combined mass about 2.7 times greater than the sun’s that likely resulted in a black hole. 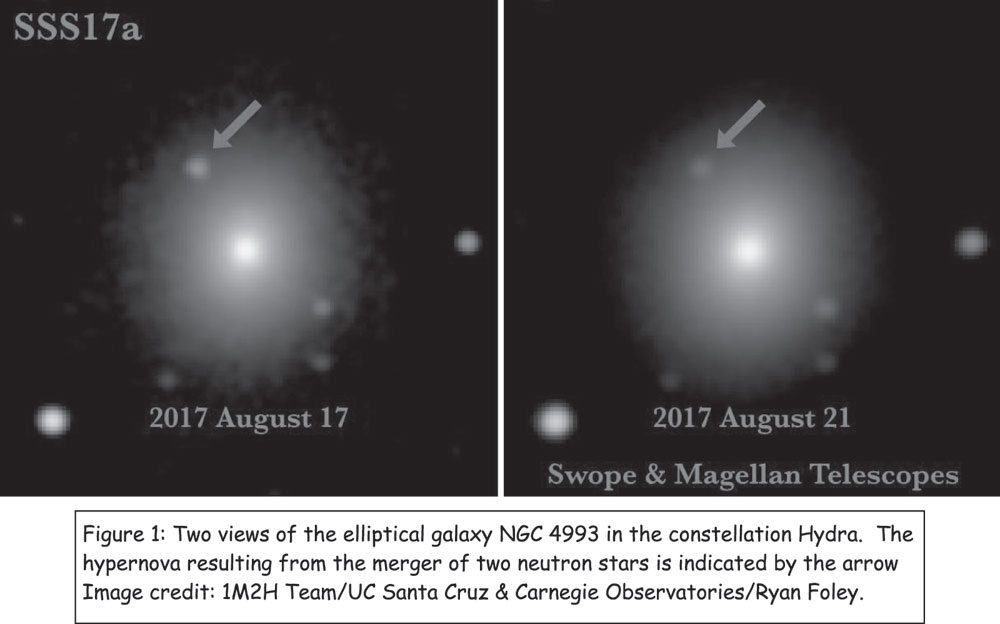 Perhaps you recall the exciting announcement of the detection of gravitational waves in February of 2016. It was as momentous in the physics and astronomy communities as the first detection of radio waves by Heinrich Hertz in 1887 after their prediction in 1867 by James Clerk Maxwell.

Albert Einstein predicted the existence of gravitational waves in 1916 on the basis of his theory of General Relativity. This theory gave us an entirely new view of what we had known as the force of gravity.

Isaac Newton told us that gravity was an attractive force between two masses of magnitude GMm/r2. The calculations of gravitational force aren’t difficult, as any high school physics student can tell you. But if you want to tie your mind up in knots, toss rocks or snowballs into the air and ask yourself how every one of them knows which way to fall. How does the Earth communicate its position to everything? Newton was content to have quantified gravity and didn’t address why it was so, but physicists have kept trying to explain it.

Einstein changed our picture. He linked space and time into spacetime and claimed that gravity was something akin to the shape of spacetime. John Wheeler explained it as, “Spacetime tells matter how to move; matter tells spacetime how to curve.” The most easily understood picture of this is spacetime as a two-dimensional rubber sheet on which masses such as the sun and Earth create dimples that force smaller objects, like the moon, to orbit them.

This fabric, then, should carry ripples — gravitational waves. These are much like sound waves where space and time are alternately stretched and compressed. This gave physicists something to test! Though the 1960s and ’70s, ideas and prototypes of detectors were built and tested. In 1984, the Laser Interferometer Gravitational Wave Observatory (LIGO) was first funded by the National Science Foundation. In 2015, it detected its first gravitational wave, 99 years after Einstein predicted their existence.

LIGO works by splitting a laser beam into two beams sent along perpendicular 4 km arms. The beams reflect off mirrors 280 times to travel distances of 1,120 km before being recombined. The paths are constructed such that the waves in the split beam, which are initially aligned crest-to-crest and trough-to-trough, are aligned crest-to-trough when they are recombined. This means the light waves “cancel out” and no light falls on the detector. However, when a gravity wave ripples through the Earth from any direction, the lengths of the arms change slightly so that the waves don’t exactly cancel out and light falls on the detector. For an explanatory video of this, go to https://www.ligo.caltech.edu/video/ligo20160211v6 (or Google “Most Precise Ruler Ever Constructed” and choose the result with ligo in the url). This detector is so precise that it can detect changes in the lengths of the arms as small as one-10,000th the diameter of the proton.

The first gravity waves detected were from the merger of two black holes. The Aug. 17, 2017, detection that prompted intense observation by so many telescopes shows a promising partnership between gravitational wave and electromagnetic wave astronomy.

The volunteer astronomers at the Adirondack Public Observatory can’t show you gravity waves but are eager to show you the electromagnetic waves from many beautiful and fascinating celestial objects. The Roll Off Roof Observatory is open to the public on the first and third Fridays of each month, approximately one-half-hour after sunset. Whether you’re an avid amateur astronomer or have never visited an observatory, come and view through our telescopes and learn about the Wilderness Above. For updates and notices, check out our website at adirondackpublicobservatory.org and our Facebook page. On our public observing days you can also call the RORO at 518-359-6317 to talk with one of our astronomers.