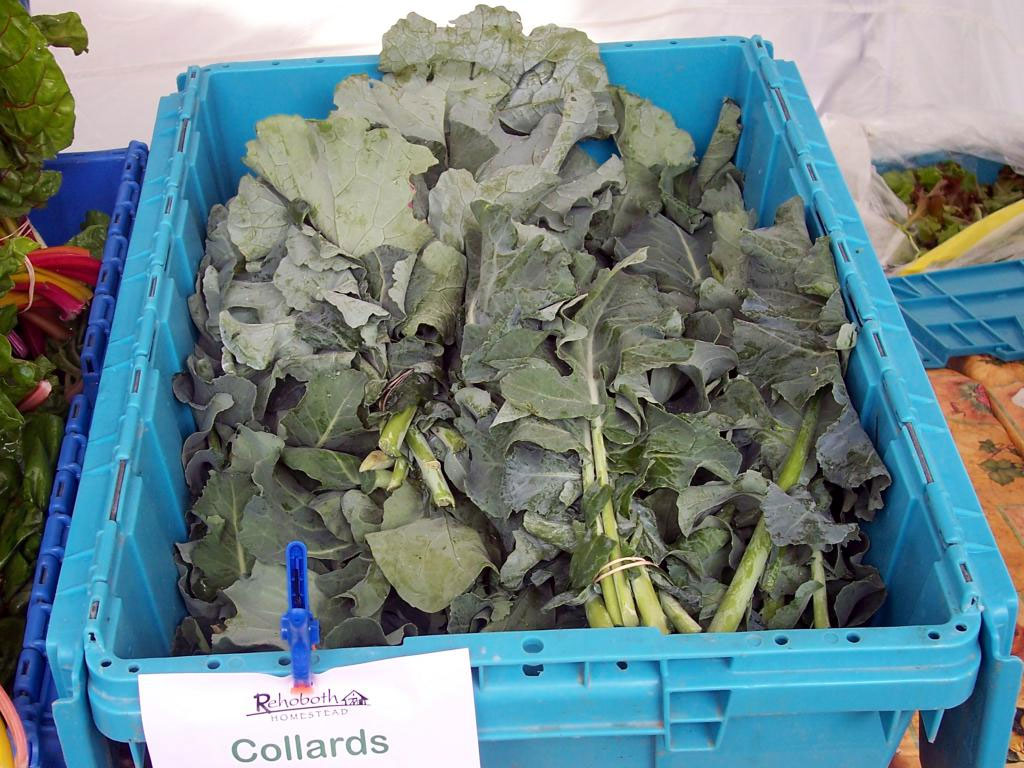 Kale has become our “it” green, gaining popularity over the last decade. Once relatively unknown outside the south, today restaurants make sure it is on the menu. Everyone loves kale chips. Kale has the buzz. But collard greens — kale’s first cousin — are still uncommon.

Standard fare in the American South, in the rest of the nation many are unfamiliar with these large, flat, oval, white-ribbed leaves. Yet they are nutritional superstars equal to if not surpassing kale! As awareness of the benefits of these healthy leafy greens grows and more people become interested in vegetable cookery, things are starting to change.

Brassica oleracea are very nutritious: a cup of collard greens has as much calcium as a cup of milk. Low in calories, fat, and sodium, and rich in vitamins A, C, K, folic acid and E, and minerals calcium, iron, potassium, and manganese, they’re a dieter’s delight. They’re also rich in fiber and antioxidants like lutein and zeaxanthin which protect eyes against macular degeneration.

With other cabbage plants, collards belong to the cruciferous (brassica) family, known for their sulfur-containing phytonutrients which help prevent many cancers. Medical studies have confirmed that these vegetables help the liver with the detoxification process.

These descendants of prehistoric wild cabbages were first seen in Asia Minor, east of the Mediterranean. They were used by both Greeks and Romans, and it is said that Julius Caesar consumed them as an antidote for indigestion that followed rich royal banquets. 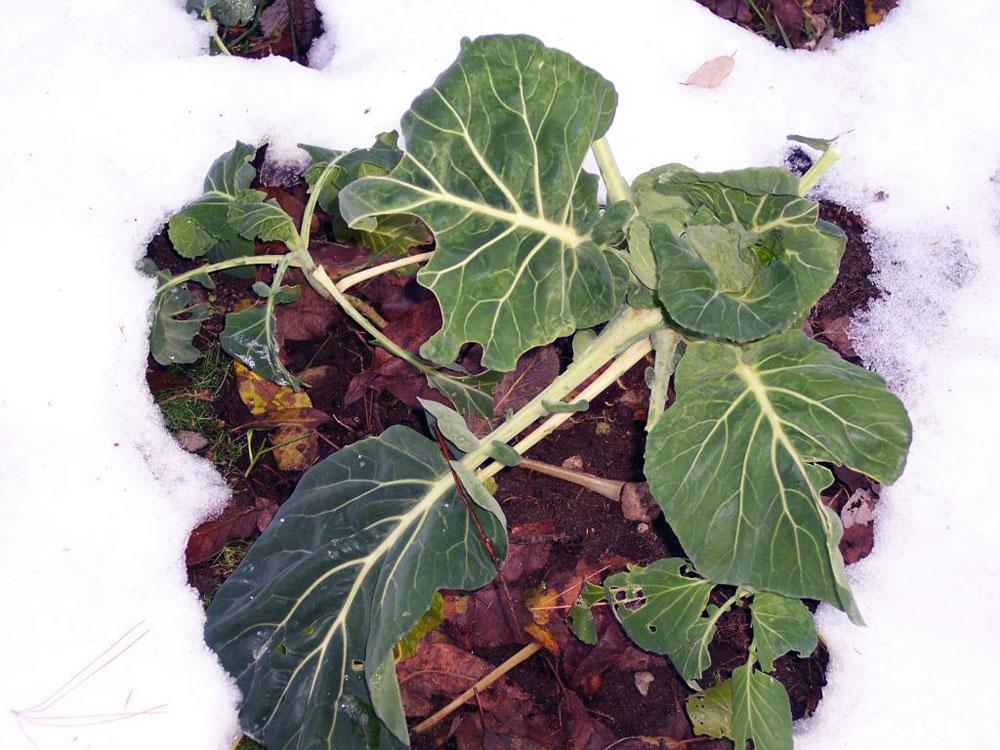 Collards soon spread northward to France, England and Germany. It is not certain if they were brought north by conquering Romans or traveling Celts. By the 17th Century, they were common among the Lowland Scots, who ate them as pot herbs with oatcakes. Our English name originates in the Anglo-Saxon coleworts or colewyrts, meaning “cabbage plants.”

Collards spread widely because they thrive in many climates, from sub-tropical Mediterranean regions to the cool, wet British Isles. They tolerate frost and survive temperatures as low as 5 to 10 degrees F (-15 to -12 degrees C), so they’re a good November crop in our area, and can grow through the winter in the southern states. Hot, dry weather can make them bitter. Horticulturalist Doug Sanders explains: “Cool weather changes starches in the leaves to sugars, and also changes the structure of protein flavor compounds.”

Collards arrived in the New World with the colonists. Black plantation slaves brought with them the African custom of cooking greens down to a thick gravy. In time, a ‘mess o’ greens’ became a common southern meal. This traditional dish involves simmering greens slowly with pork, which tempers their flavor and softens them.

Today, collards are grown commercially in the southern states. They’re also cultivated in the West Indies, South America, Africa and Southeast Asia. In Ethiopia, a common side dish is Ye’abesha Gomen — collards cooked in olive oil with peppers, onions, garlic and spices.

Collards’ relatively mild flavor (as compared to more pungent greens, like kale, turnip or mustard) makes them adaptable to many recipes, though they still need a little dressing up. Traditionally the greens are cooked and their tough stems discarded. In early spring, raw foodies add the smaller, tender leaves to salads. 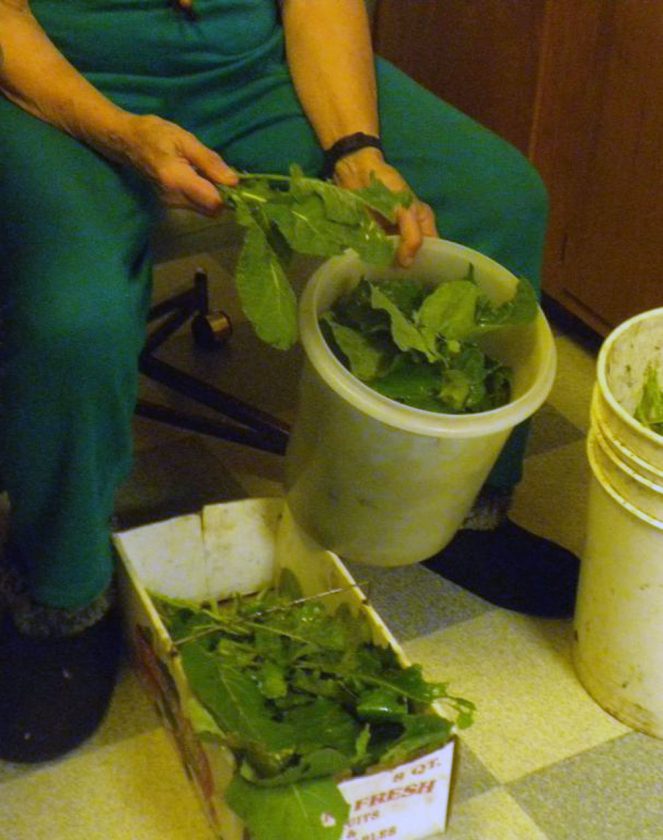 When shopping for collards, search out bright green, thick leaves, and avoid any that are tinged with yellow or wilted. Local collard greens should be available until Thanksgiving or even later. From January through April, supermarkets may carry collards grown in southeastern states. 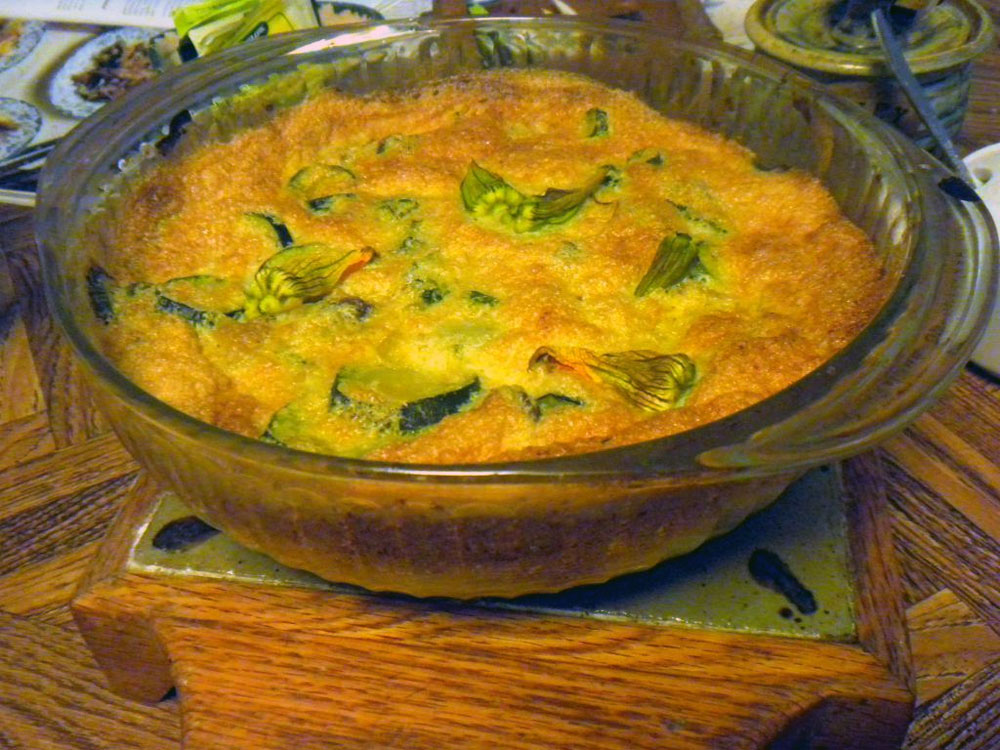 A little oil for the pan

Place large pot of water to boil for the pasta. Add 1 Tablespoon salt. When water boils, stir in pasta, return to boil and cook according to package directions. Drain, reserving 1 cup liquid.

While pasta cooks, strip the collard leaves from the tough stems; discard stems. Wash leaves and set aside.

Coat a large skillet with lid lightly with oil. Add the sausage and cook on low. Peel and dice the onion, add and sprinkle with salt. Peel and mince the garlic, and stir in. Cook 5 – 10 minutes until sausage is brown and onions are translucent.

Chop collard greens coarsely. Add to the skillet along with 1/3 cup wine and 1/3 cup pasta cooking water. Cover, and cook over medium heat, until tender – 5 – 10 minutes. Add 1 cup diced tomatoes with their liquid.

Toss cooked pasta with contents of skillet, olives, and feta. Add a little more pasta cooking water if the mixture is too dry.

Peel the sweet potatoes (if desired) and slice about 1/4 inch thick. Coat with half the oil and sprinkle with herbs and salt. Spread in single layer in baking dish or cookie sheet and roast 15 – 20 minutes, or until almost fork-tender. (You can also boil potatoes instead if you prefer).

While potatoes are roasting, peel the onion, and cook in remaining oil over low to medium heat for 5 minutes. Peel and chop the garlic, add and cook 2 minutes more. Wash and coarsely chop collards, and add to the skillet; cook 2 minutes. Add 1/4 cup broth or water, cover, and simmer 10 minutes.

Author of the award-winning cookbook Garden Gourmet: Fresh & Fabulous Meals from your Garden, CSA or Farmers’ Market, Yvona Fast lives in Lake Clear and has two passions: cooking and writing. She can be reached at www.wordsaremyworld.com or on Facebook as Author Yvona Fast.