Strolling through history at Owen and Copperas 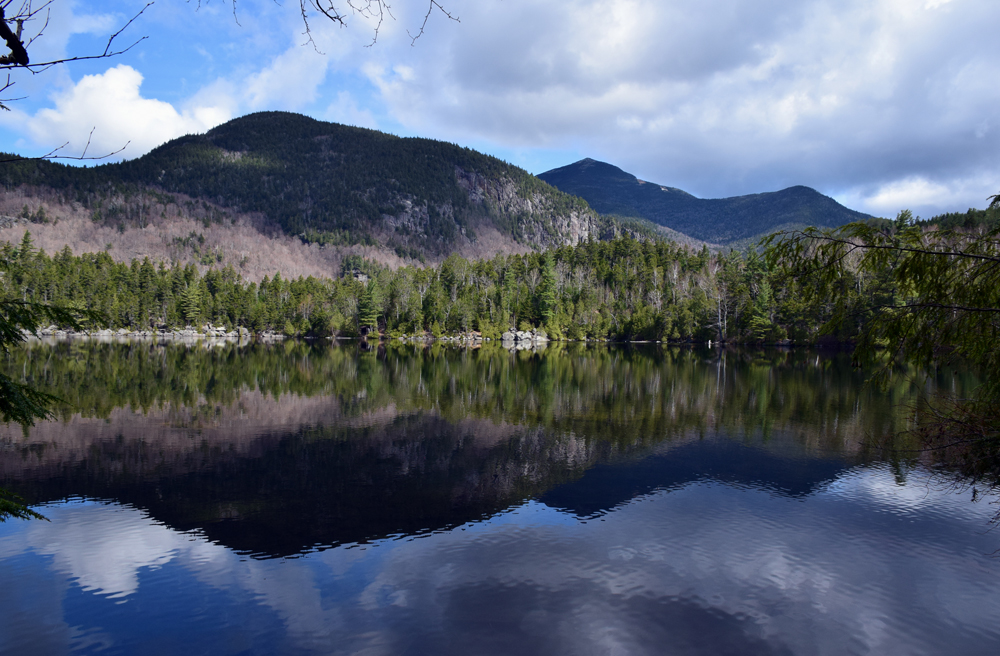 WILMINGTON — With the state Department of Environmental Conservation asking hikers to stay below 2,500 feet in elevation during mud season, Monday’s sunshine and summer-like weather provided a good chance to check out a pair of ponds, even if the water was too cold to go swimming.

Owen and Copperas ponds are located not far from state Route 86 between Wilmington and Lake Placid, in the Sentinel Range Wilderness Area. Reached by a well-marked and relatively flat trail, the ponds — along with nearby Winch Pond — offer several options for hikers.

I set out from the Owen Pond parking area, and within a quarter-mile reached the bank of its outlet, which flows into the West Branch of the AuSable River. This early in the spring, the stream was moving quickly, and although there were a couple of little feeder streams, those were easily hopped over.

Before I caught a glimpse of the pond, I noticed something in the trail ahead. As I got closer, it was obviously a small, dead animal. But when I was within 15 feet, I could see it wasn’t a squirrel, but rather the rear half of what looked to me like a snowshoe hare. It was mottled brown but mostly white still, and although there were a few flies buzzing around, this was obviously a fresh kill. The blood hadn’t coagulated at all, and whatever had been enjoying its lunch was nowhere that I could see.

The trail began to climb, but gently and not very high. As the stream fell away below the trail to the right, it felt like walking through some unexplored river gorge, even though there were blue DEC trail markers at regular intervals. After about a half-mile, the pond can be seen through the trees, and at the 0.75-mile mark, yellow discs mark the designated campsite on the pond.

A pair of mergansers swam near the shore and it wasn’t hard to picture setting up camp just a quick hike from the car then having a fully immersive wilderness experience.

The trail continued past the campsite and then skirted the edge of a beaver pond where, in a few weeks, the air will undoubtedly be filled with black flies and mosquitoes. But in early May, there were just birds flying from dead snag to dead snag.

Following a smaller stream, the trail then came to an impressive beaver dam which was holding back about a foot of water. I sat silently at this wetland, hoping maybe a moose would pop out of the woods if I was quiet enough, but the birds just kept chirping and after a few minutes I moved on.

The only real hill of the hike was between the second wetland and Copperas Pond, but it wasn’t much of a hill. The trail went up and the quickly back down, and at just about the 1.5-mile mark Copperas Pond and another designated campsite came into view.

From this campsite, Whiteface Mountain and the cliffs of Wilmington Notch loomed large over the pond, and a scenic DEC lean-to could be spotted on the far side of the pond. I took some photos and had a snack before deciding to turn around to head back. However, if you have more time then you still have some options at this point.

From Copperas Pond, hikers can circumnavigate the pond to the lean-to, or continue on to Winch Pond, which is maybe another three-quarters of a mile or so. From state Route 86, Winch Pond has its own trailhead, and the lean-to can easily be reached from that parking area. Winch, Copperas and Owen ponds are often hiked as a trio, and if you have two cars it could be a through-hike.

The DEC, in its unit management plan for the Sentinel Range Wilderness Area, said the land was originally set aside for veterans of the Revolutionary War, but settlement was slow to take off.

“The lands comprising the SRWA were originally part of the ‘Old Military Tract,'” the UMP says. “The Old Military Tract was land that was set aside by the state in 1786 as a ‘memorial of public gratitude’ to compensate Revolutionary War veterans for their service.”

Unfortunately, this land was too remote to be of immediate value to the veterans, and none are known to have settled there. Not long after this, however, settlement began to occur around the Sentinel Range area. By the beginning of the 19th century, villages had been established at Keene, Jay, and Wilmington; and settlers were beginning to move into North Elba.

“Much of the logging that took place in the SRWA was done by the J. & J. Rogers Company of Ausable Forks. Started in the 1830s, the Rogers Company quickly grew to be the one of the largest producers of iron in the country. By the 1860s, they were producing over 6,000 tons of iron and iron products a year. In order to sustain this level of output, the company had to consume large amounts of local resources. They had vast land holdings throughout the Ausable Valley Region, including much of the land now contained in the SRWA, and timber was cut from 1,000 acres of this land per year to supply the 1,600,000 bushels of charcoal needed to fire their forges.

“In the 1890s, the J. & J. Rogers Company reorganized its industry from iron to wood pulp products, and began cutting softwoods in the Ausable Valley and High Peaks Region,” the UMP continues. “Several large logging operations were conducted in the Sentinel Range in the early 1900s. Logs from these operations were transported to the Ausable River on large, horse-drawn sledges in the winter and then floated to the company mill in Ausable Forks in the spring. Logs were also brought to Owens Pond where they would be driven to the Ausable River in the spring.”

It’s pretty amazing as you walk these trails to think that the whole area was once a large logging operation, long before the more environmentally friendly practices we know today existed. Although much of the SRWA was once logged, the area now feels as if it’s hardly ever been touched.