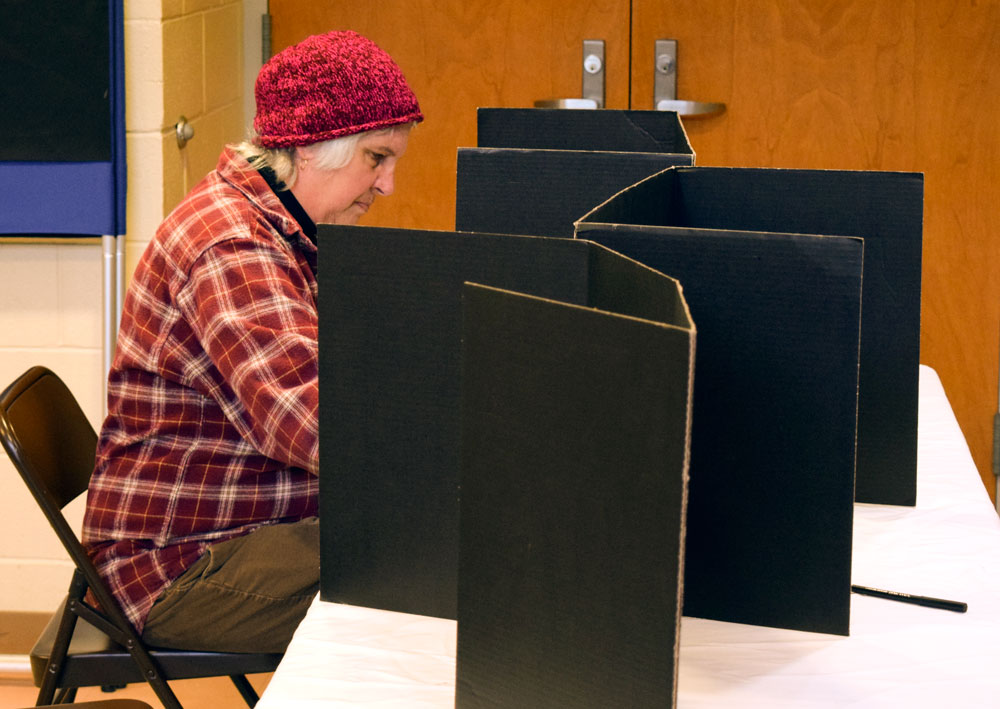 A voter fills out a ballot behind a partial screen earlier this year. (Enterprise photo)

ELIZABETHTOWN — Voters will have 10 days to cast a ballot in the Nov. 5 general election.

This will be the first time voters in New York state head to the polls early. New York joined 39 other states that allow early voting in January, after a spate of election reforms were approved by the state legislature and signed into law by Gov. Andrew Cuomo.

“Anyone can vote early,” said Essex County Democratic Election Commissioner Sue Montgomery Corey. “If they vote early they will obviously not be able to vote later if they’ve already voted, but other than that, it should be the same basic process.”

In Essex County, there will be one polling place open between Oct. 26 and Nov. 3.

The Board of Elections selected the county Public Safety Building at 702 Stowersville Road in Lewis as the location of the polling place, according to Corey.

The Board of Elections had hoped for at least one other polling place, but that didn’t pan out, according to Corey.

“Because this came in the middle of a budget cycle, we didn’t have the budget set aside for staff,” she said. “Even to do it once is going to be an expensive thing.”

Franklin County will also have a single site for early voting at the county Board of Elections office on West Main Street in Malone, according to Franklin County Republican Election Commissioner Tracy Sparks.

The early voting hours between each county will vary, but both polling sites will be open for a nine day period leading up to the Nov. 5 election.

There are a few deadlines for voters coming up.

The voter registration deadline is Oct. 11. The deadline to change your address with each counties’ Board of Election is Oct. 16.

Voting by absentee ballot will remain the same, Corey said.

“If you’re going out of town, there’s still the option of voting absentee,” she said. “(Early voting) will give people the chance to vote early in person at a time that’s maybe more reasonable for people.”

Absentee ballots must be postmarked by Nov. 4 and received by the Board of Elections by Nov. 18.

In addition to early voting, election reforms approved by the legislature in January also include measures that consolidated state and federal primaries into a single election; made absentee ballots available to any eligible voter; authorized same-day voter registration; allowed 16- and 17-year-olds to be preregistered to vote when they get their driving permits; and implemented an automatic transfer of voter registrations between counties when a resident moves.

There is enough staff to man the early voting station in Lewis, but more people will be needed heading into 2020, when there are three elections with several higher-level races, including the presidential election, that are likely to draw more people than would normally vote in a local election year, she said.

Another part of the recent election reforms is further underpinning the county’s need for more poll workers.

“Primary hours are going to change,” Corey said. “They will be the same as they are downstate for the first time. That’s going to be a challenge.”

One of the perks of being a poll worker: You get paid.

All poll workers undergo training, which they’re paid for, and mileage is paid for travel to the training site.

“You get to be part of the electoral process. You get to see how elections happen,” Corey said. “It’s a public service and an honorable one. We’re very grateful to people who give up their time and come to work at the polls.”