Saranac Laker gets up-close and personal look at Russia 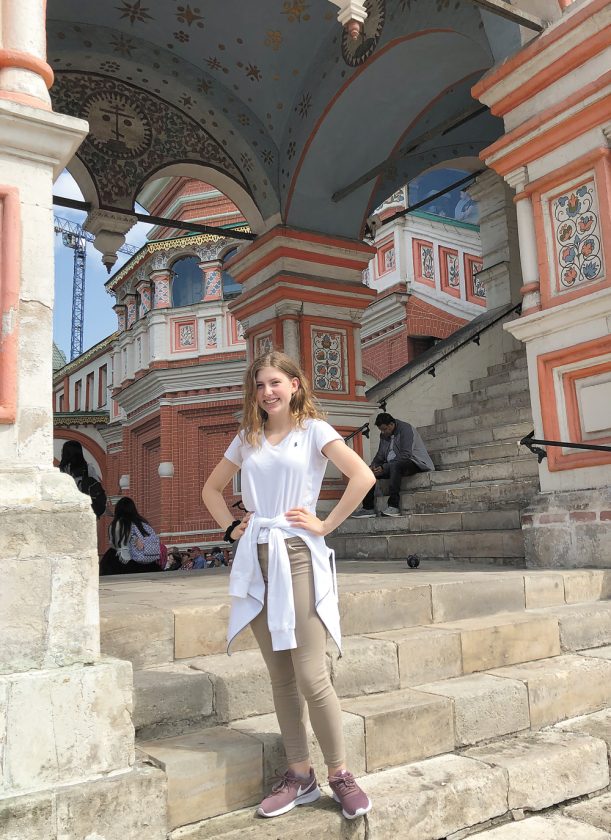 SARANAC LAKE — Dellice Chase loves to travel, but Russia had never popped up on her list of places to visit. But after months of interviews, written exams and even more interviews, Dellice was going to Russia.

The 16-year-old Saranac Lake High School student has also been dancing since she was 3 — started seriously dancing at age 9 at the Lake Placid School of Ballet and Dance. A full merit scholarship let her stay in Russia for six weeks at the end of this summer and take dance classes at the Bolshoi Ballet Academy. The program, called the National Security Language Initiative, is offered and funded by the U.S. State Department, partnering with the Russian America Foundation and American Councils for International Education. (This paragraph has been revised to clarify the organizations responsible for the scholarship program.)

Although ballet was on Dellice’s mind, the Russian language and cultural experience were the focuses of the trip.

The language came slow. At times she worried she was behind the others. Endings, names and even the alphabet were difficult. For those who don’t know Russian, the alphabet looks similar, but it’s different. A “P” makes the r sound and “B” makes the v sound. To a neophyte like Dellice, it can be unsettling.

Learning the vocabulary, however, was joyous. 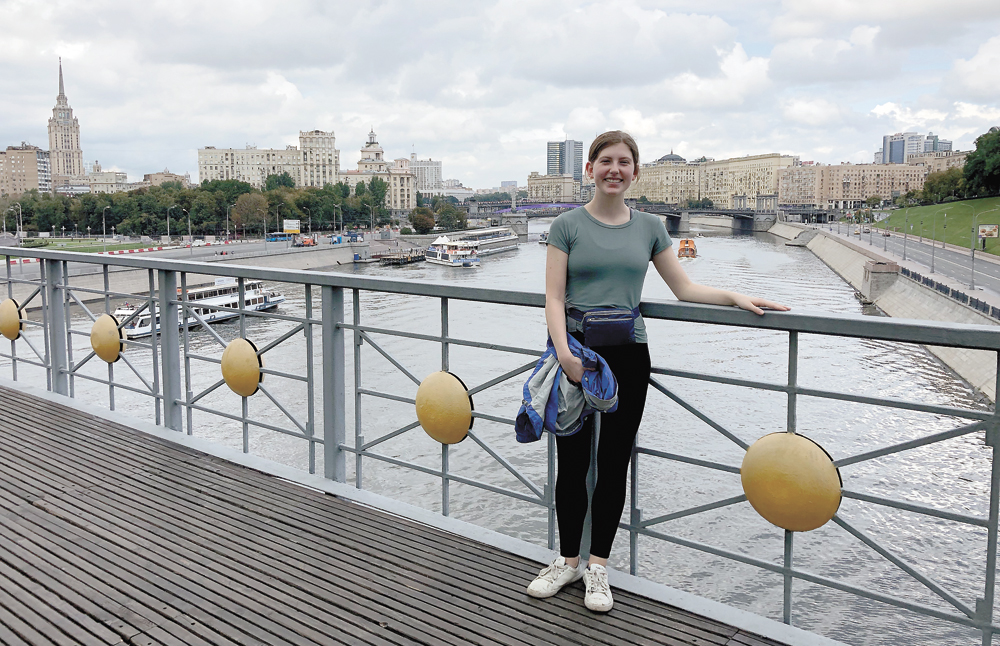 Dellice Chase stands on a bridge above the Moscow River in Russia. (Provided photo — Dellice Chase)

“Just being able to vaguely say something, even if it’s the wrong case, saying something to a Russian person and having them understand was an incredible feeling because I felt like I was accomplishing so much,” Dellice said.

She used her language to tour Moscow, which is where she resided during the six-week stay.

During the week, Dellice studied with the Bolshoi Academy, but on the weekends she spent time with two Russian families. The first family she stayed with lived in an apartment, the second lived in a house.

The families housed her, fed her and showed her and her friends around the city. With the time she spent with the families and teachers she found parallels and contrasts with her own life.

One large cultural difference that stuck out to Dellice was the approach to eating as a group. One question that arose during her stay was why Americans wait until everyone’s at the table before people start to eat. 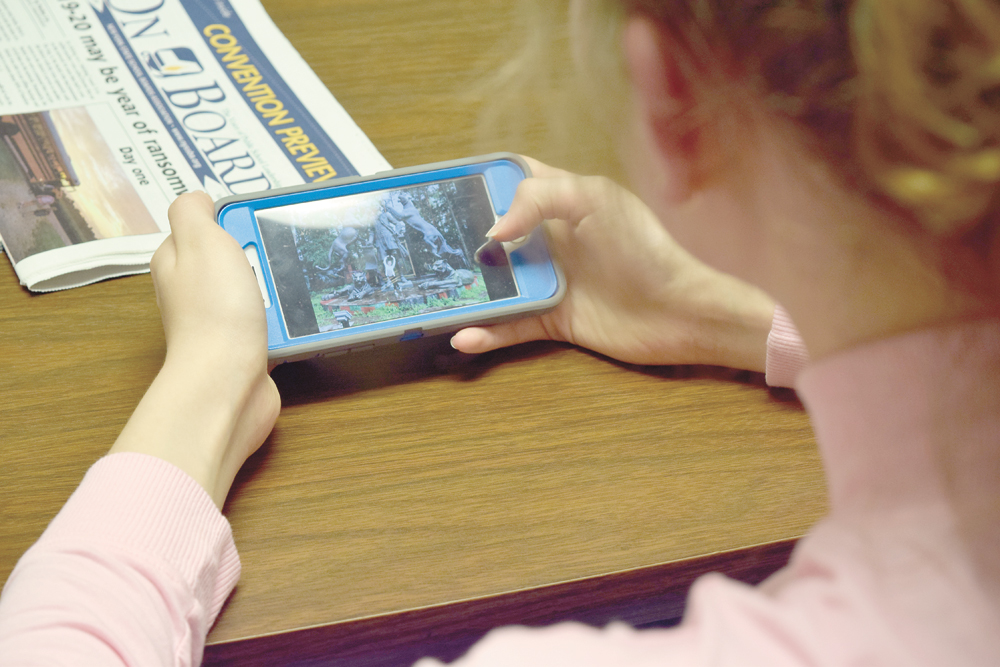 Dellice Chase looks back at photos she took while in Russia this past summer. (Enterprise photo — Kevin Shea)

“My host father said to me, he was like, ‘Why do Americans wait to sit down at the table? I want an actual reason,’ and I was like, ‘I can’t think of a reason, it’s respectful,’ and he’s like, ‘but why, if I eat faster shouldn’t I eat faster?’ And he kept discussing that he wanted a reason and it made me realize that I couldn’t really give him one.”

Most of the differences between the families and the Russians she met were small, perhaps less noticeable had they not been speaking another language. She said the way they spoke to each other was very informal, and often they yelled to one another.

“They were also really friendly, and I feel the best words they knew were ‘I love you,'” Dellice said.

Dellice said when she left their homes to tour the city or to go to class they would shout to her, “I love you!”

With the first family, she visited the Cathedral of Christ the Savior, the Red Square and the Kremlin. Dellice found the city beautiful.

She said Moscow was clean, even the subways. There was a mix of older and newer architecture in the subways and the stairs were broad, allowing for space, preventing cramped quarters when trying to enter or leave. Dellice said this styled structure of openness was pervasive throughout the city, so much so that it was at times difficult to recognize it as a city.

Dellice compared it to New York City, where buildings loom high and are packed together like celery stalks. In Moscow there were still tall buildings but it was spread out. There was still room for many parks, wide sidewalks, shrubbery and trees planted on curbs between the sidewalk and the road and houses that you would find in a suburb. Dellice said she liked how Moscow was set up.

But the buildings still impressed. Dellice remarked that one of the host families she stayed with on the weekends lived near Moscow State University. They ventured onto the expansive campus and at one point settled in front of the tallest educational building in Europe, the main building on the campus, which was also the tallest building in Europe until 1997. It is one of the seven sisters, designed in the Leninist style.

In the afternoons, she took classes learning Russian.

“It was like four hours every day, so we had two breaks in between,” Dellice said. “It was definitely long, but it didn’t feel as long because I was learning so much that it felt like it was going by really fast. It wasn’t like I was sleeping in the classes or anything.”

During classes they spoke Russian, took quizzes and watched films. They were given a textbook and a workbook that could be written in.

“But it was really interactive, and I think that’s what really helped,” Dellice said. “They would write stuff on the board so you would get it down, but sometimes, like a second after you write it they would ask you something and you’re like ‘OK, gotta go into this.'”

Speaking was mostly in Russian. Sometimes the teacher helped them understand what was being discussed, but mostly it was sink or swim, as some of the teachers didn’t speak English.

The courses proved useful. What was learned in classes helped them move freely throughout the city in groups or as a whole class for certain activities.

For one of the scheduled activities, Dellice met with the artist Zurab Tsereteli, who has created many well-known pieces of art, including a 350-foot statue of Christopher Columbus that resides in Puerto Rico.

“He has so many paintings and sculptures that are huge,” she said.

Her mother, Diane Chase, who had been following up on how the trip was going through notifications via the different organizers of the trip, was shocked and impressed when she heard her daughter was meeting famed artists.

“But we were like, ‘what, you’re having a master class with the actual artist, not just some paint and sip,’ that was my whole thing,” Diane said. I was like, ‘What?!'”

Dellice and her friends also visited Gorky, which is named after Maxim Gorky, a Russian and Soviet writer, took a river cruise and a cooking class.

For her dance classes there was also a need to understand Russian, as all the classes were in Russian. In New York City, there was someone who spoke English to teach the classes. That changed while in Russia, however.

“They did choose a teacher for us that spoke a little bit of English, but sometimes it was hard and took a little bit of guesswork to get what she was saying,” Dellice said.

“In Russian, when you’re lifting your leg up they’ll lean back a lot, whereas Americans stay straight up, and they really lean back. They want your head to almost scrape the floor, like they want you really far back,” she said.

Dellice added that some of the differences are less noticeable unless you study ballet. The leg is turned to a different angle or points a different way than in the American style.

Flexibility was also a focus in her learning.

“We had a stretch class every few days, and that was intense,” Dellice said. “It was really good, though. It really helped, which I really needed, but I wasn’t as flexible as I am now, and of course flexibility is really good with ballet.”

Dellice had one ballet teacher, but there were other teachers who helped with facets of ballet such as stretching. She also learned a type of Russian folk dance that is often found in Russian ballet.

The transition home was challenging. She would slip Russian into conversations and notice inside jokes she and her summer friends shared were no longer relevant, as they were now gone. The quiet of rural America was an adjustment. She had spent over two months in cities — either New York City or Moscow — and readjusting to living with her family took time as well. She now had to ask to go places. Walking down the street to go the store was not possible, for there was no store down the street. Her mother had to drive her.

Diane said that when Dellice returned she had to jump back into her studies, as school was on the horizon.

But what stuck was important, she said. Understanding what it takes to approach someone else who speaks another language is important, as attempting portrays a level of respect she found was important. Dellice said students at Saranac Lake High School speak other languages, and whereas before she would flinch at the opportunity to learn more about another language. Words that she couldn’t comprehend were terrifying. Learning new languages was a task that seemed insurmountable.

But now she’s sampled a slice of the world she’d never known and never expected, and she hopes to return.