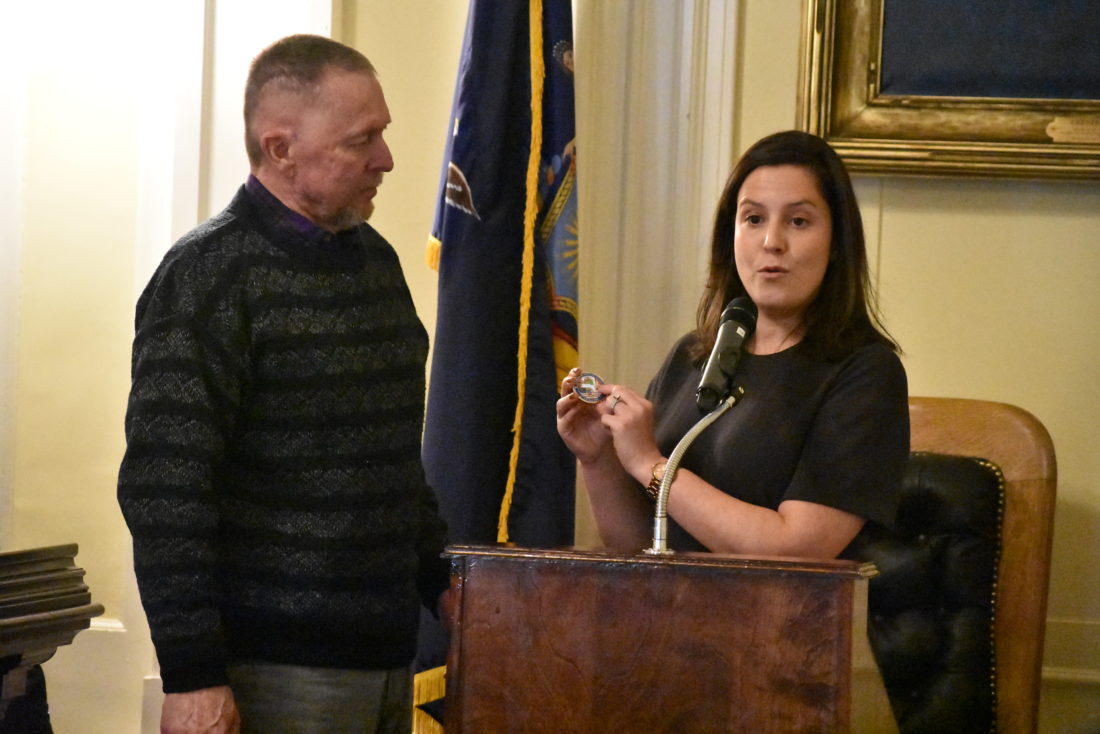 Congresswoman Elise Stefanik presents Wilmington Supervisor and most recent Essex County Chair Randy Preston with a military challenge coin for his years of service at the county at the Essex County Court House in Elizabethtown in January. Preston stepped down as chair because of health issues and was replaced by his co-chair, Willsboro Supervisor Shaun Gillilland. (Enterprise photo — Griffin Kelly)

In the U.S. Capitol Thursday, Rep. Elise Stefanik honored the legacy of former Wilmington town Supervisor Randy Preston, who died last week at the age of 60 following a 28-month battle with cancer.

Stefanik, R-Schuylerville, said on the floor of the House of Representatives that Preston was a “bipartisan leader” who was beholden to no one but the people of Essex County.

“He was undoubtedly a champion for those he represented,” she said.

“Randy Preston’s missions and advocacies for the Adirondack region were innumerable. He was passionate about lowering our tax burden and ensuring we had ample funding for life-saving emergency medical services.”

Preston was instrumental in helping to bring in a $2.27 million state grant to help the county execute a new EMS pilot program in four towns, including Wilmington. That money will pay for full-time staff to supplement existing volunteer EMS operations. It’s a test of whether a countywide EMS system would be feasible. If the pilot helps alleviate dropped calls, the county stands to unlock an additional $4 million to expand the initiative.

Preston served two terms as chairman of the county Board of Supervisors. He was first elected Wilmington town supervisor in 2007 and took office in 2008. Preston was a member of the Wilmington Fire Department for 42 years. He served as fire chief for 14 years.

Preston is credited with helping to move forward a number of improvements within the town of Wilmington throughout his tenure, including the renovation of the Whiteface Veterans’ Memorial Highway and the elevator to Whiteface’s summit, the expansion of mountain biking trails within the town and upgrades at the town beach. Preston’s lobbying was also what brought the new High Peaks Health Center building to Wilmington, and his concern over road salt helped draw more attention to that issue, North Elba town Supervisor Roby Politi has said.

“I express my deepest sympathies to Randy Preston’s wife, Michelle, and his entire family. It is a sincere honor to enter Randy Preston’s memory and achievements into the Congressional Record.”

Preston’s funeral was held Tuesday at the Calvary Baptist Church. Hundreds of uniformed firemen, friends, family and state and local officials — some wearing Hawaiian shirts — gathered to remember his legacy. His casket was carried away from the church atop one of the Wilmington Fire Department’s fire trucks to Haselton Cemetery, where he was laid to rest.

Stefanik also honored the legacy of MaryLou Whitney, the “Queen of Saratoga,” on the House floor Thursday. Whitney died July 19 at the age of 93.