Redskins sign brings cheers from many, insult to others 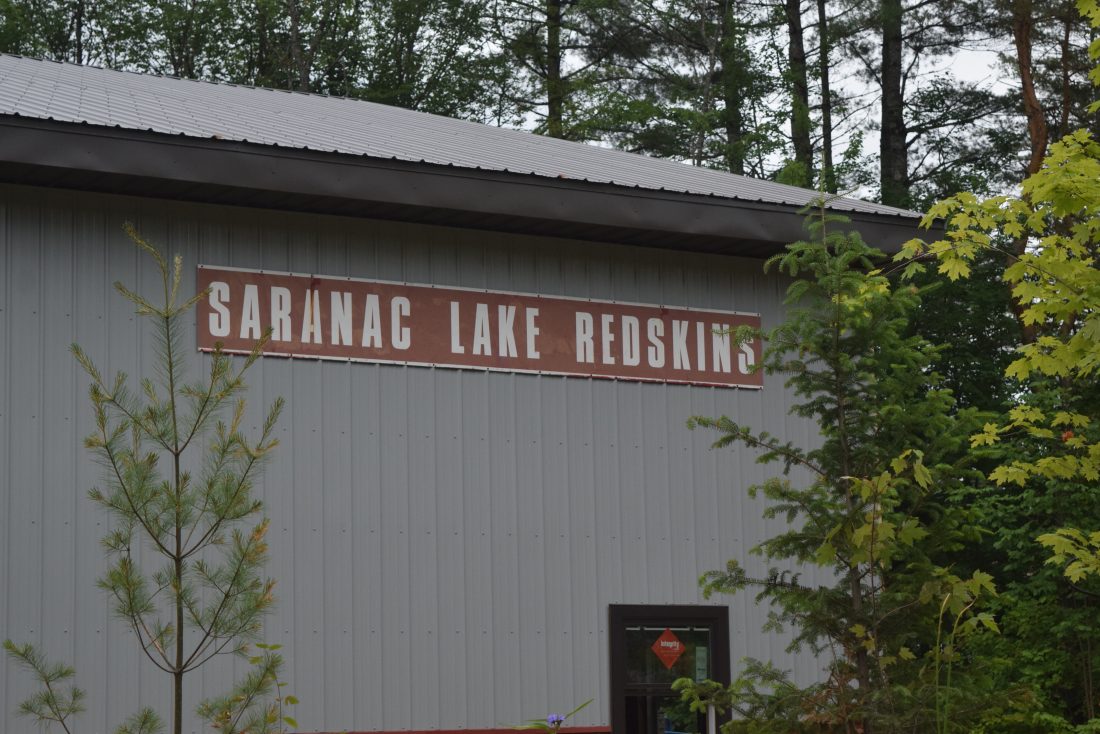 The sign on this building at 1026 state Route 3 and was put up by Matt Raymond, son of former Saranac Lake High School football coach John Raymond. (Enterprise photo — Kevin Shea)

SARANAC LAKE — Drive between Saranac Lake and Bloomingdale on state Route 3, and on the side of a construction building is a sign from the past. It bears an old nickname some want reminders of and others want removed.

The words “Saranac Lake Redskins” appear in white lettering on a red background. Redskins was the local high school’s sports nickname for 50 years until 2001, when the school board retired it because many people saw it as offensive to Native Americans. Students later chose a new nickname, the Red Storm.

The sign was put on the warehouse by Matt Raymond, son of the late John Raymond, a Saranac Lake High School football coach, teacher and eventually district superintendent. The sign was the top banner for the old scoreboard on the football field. For Matt, it’s sentimental.

“We all grew when football was king,” he said. “It was more of a cathedral than a field, really.”

After the sign was replaced, he kept it and wasn’t sure what to do with it.

“I didn’t have the heart to take it to the scrap heap,” he said.

Thirty days ago, he put it up on the side of his construction company’s new warehouse. He said it wasn’t a political statement and wasn’t meant to start controversy.

“The last thing I would ever want to do is incite some kind of riot,” he said.

The reaction has been largely positive. On the Facebook page Friends and Alumni of Saranac Lake High School, a post on June 16 by Debra Short showed a picture of the banner.

“Driving into Saranac Lake and look what I see….The best sign in All of Saranac Lake,” Short wrote. More than 200 people clicked that they liked or loved the post. Only two clicked on the angry icon.

Matt Raymond said he has received positive phone calls, emails and face-to-face interactions. He said one alumnus from the school asked him if he could have his picture taken under the sign with his grandson. Matt said he has not received one negative comment to his face.

Not everyone is pleased, however. The Enterprise has received a couple of messages from people saying the sign is offensive. When asked about the sign, John Fadden, one of the owners of the Six Nations Indian Museum in Onchiota, said, “Well that’s not very nice.

“I don’t think it should go up, but he should ask other Indians before he puts it up.”

The former nickname became ingrained in many Saranac Lakers’ minds. Terry Brown Buckley recently organized a reunion for all SLHS alumni from the 1980s, and she incorporated Redskins into the name of the event, held July 6 at the Harrietstown Town Hall. It’s intended to become an annual gathering.

“We grew up as Redskins and most of us feel strongly that we’ll always be Redskins & are proud of it,” she wrote in a message. “We had school apparel with the name on it displayed proudly.”

The St. Regis Mohawk Tribe is based at Akwesasne, a little more than an hour’s drive northwest of Saranac Lake. In 2001 the tribe declined to take an official position on whether the Saranac Lake nickname should be changed, but some members personally oppose the Redskins nickname.

Sheree Bonaparte, museum program coordinator for the Akwesasne Cultural Center, said she heard the term as a child, and it was always used in a derogatory sense. Darren said he first heard it in junior high when he attended a school off the reservation. Another student, who was not Native American, called him and other students from the reservation redskins.

“It brings back really good memories from my time here,” said Cy Ellsworth, a high school track coach, modified football coach and middle school history teacher in Saranac Lake. He lives in Bloomingdale and will drive by the sign every day on his way to and from work.

Nevertheless, he still says changing the name was the right move, although he didn’t like how the change happened. He also would have preferred the name Red Falcons to Red Storm. The school let students at the time vote on a new nickname.

Eric Bennett is the athletic director for the Saranac Lake Central School District and head football coach for SLHS. He said that when he attended SLHS, the mascot was a source of pride and identity, but now there is a new source for that strength and sense of community.

Tom Foley, who graduated in 1986, said he believes too many people take things too seriously nowadays, a symptom of politically correct culture. He said his grandparents were Native Americans in Canada. He sees the term Redskins and all of its memorabilia a source of pride and thinks actual Native Americans are not offended by it.

Darren Bonaparte said the term’s use in sports mascots came at a time when America wasn’t paying much attention to what Native Americans thought was offensive. The Washington Redskins of the National Football League adopted the name in 1933 and still refuse to give it up.

“It got adopted by some sports teams and in an era where we didn’t have much of a voice,” Darren said. “It harkens back to an era where native people were not given full consideration, like we were a thing of the past.

“That era is gone now. We have a voice, and we’re not going to just sit back.”

He said the Redskin name should be ditched and those who hold onto it because of nostalgia need to let go of it and move on.

Nevertheless, Ellsworth said he’s heard SLHS athletes bring up the name and say they wish they could be Redskins like their parents, but the discussion never gets too serious.