Getting buzzed: Hex and Hop combines bees and beer in B’dale

The “No BH IPA,” freshly poured from a beaker by former engineer and current brewer Ethan Mikesell, does not use boiled hops, straying from IPA-traditions. (Enterprise photo — Aaron Cerbone)

Ethan Mikesell, left, and Nick Delaini stand with a beehive in their brewery Hex and Hop. Though these bees will not produce the honey used in their beer, they provide patrons with entertainment and a chance to win a free beer if they spot a queen bee. (Enterprise photo — Aaron Cerbone) 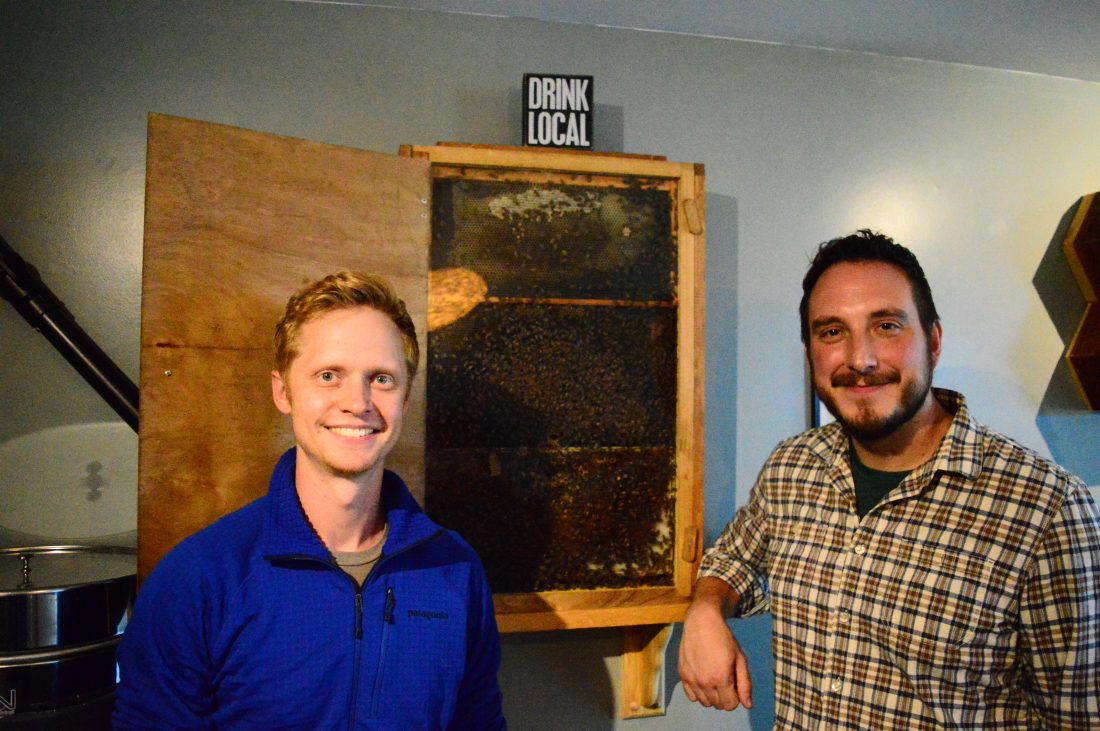 Ethan Mikesell, left, and Nick Delaini stand with a beehive in their brewery Hex and Hop. Though these bees will not produce the honey used in their beer, they provide patrons with entertainment and a chance to win a free beer if they spot a queen bee. (Enterprise photo — Aaron Cerbone)

BLOOMINGDALE — Hex and Hop was hopping this weekend as it held its “Grand Pouring” to celebrate the opening of Bloomingdale’s first brewery.

Owners Ethan Mikesell and Nick Delaini have combined their skills of beer brewing and beekeeping, respectively, to open a brew house in the former Bloomin’ Market building.

They held a “super-soft opening” before the weekend, where handfuls of local and seasonal residents tried out honey-tinged brews, but their big day came Saturday, when they said around 200 people showed up.

On Saturday, seven food trucks were parked in the gravel lot, having traveled from all over the area. Inside, the food served includes bread, veggies, meat and dairy from a variety of local providers. 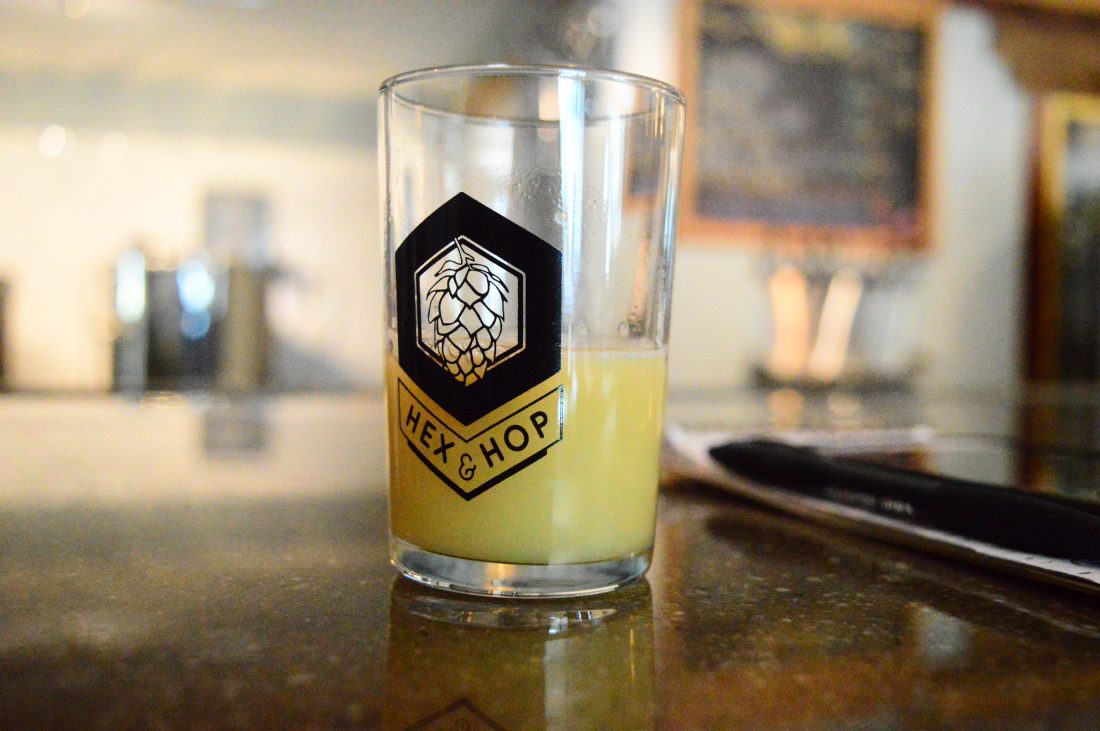 The “No BH IPA,” freshly poured from a beaker by former engineer and current brewer Ethan Mikesell, does not use boiled hops, straying from IPA-traditions. (Enterprise photo — Aaron Cerbone)

The honey comes mostly from the Boston Honey Company, where Delaini worked when he started putting hives in the area around here six years ago.

There is a hive in the bar, but that is just for decoration and entertainment. Dozens of bees crawl over each other and the honeycomb mounted behind Plexiglas on the wall. If a patron is able to spot the queen, who has a red mark on her back, Mikesell and Delaini said they get a free drink. 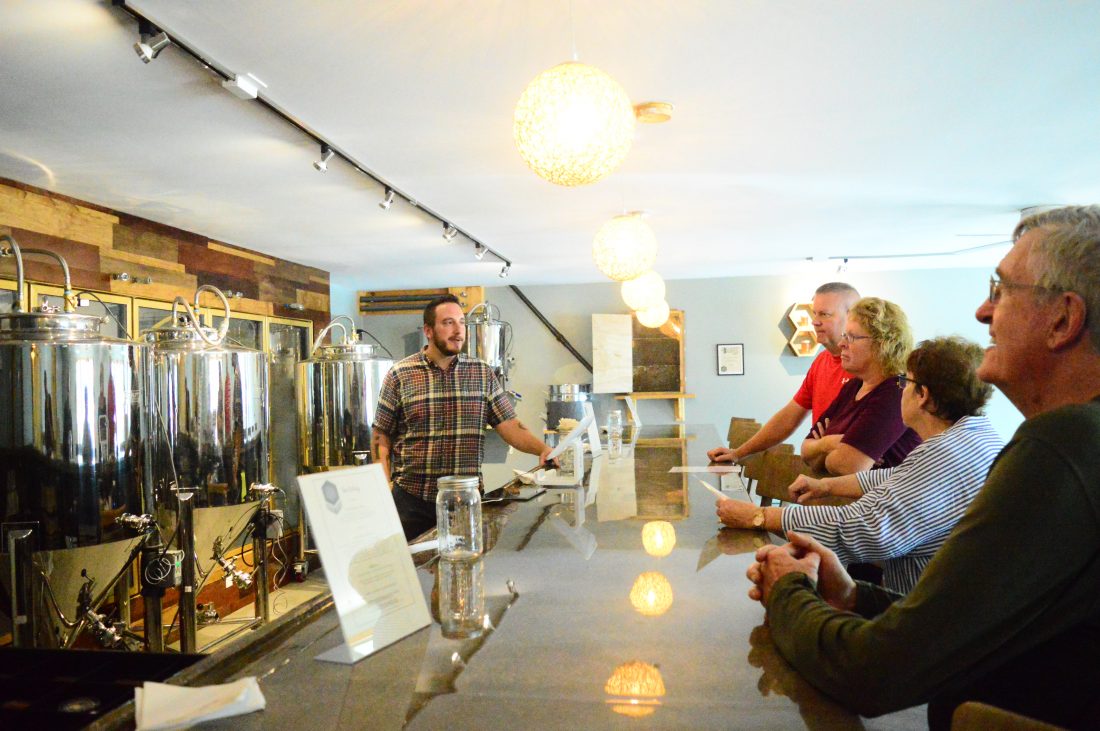 On Friday Delaini leaned across the counter, pouring drinks and chatting with locals. Mikesell walked out of the cooler in with a beaker full of their “No BH IPA” and a hydrometer. The “BH” stands for “boiled hops.” Mikesell said while most brewing requires boiling hops, this style adds hops to everything but the brewing step, resulting in a sweeter, less bitter, more hoppy flavor.

He uses the hydrometer to measure the residual sugars in the nearly finished product. To determine the alcohol content of each drink he measures the sugar content at the beginning and end of the process and subtracts the final number from the first to determine how much sugar was converted to alcohol.

Mikesell moved to the area from Washington, D.C., where he had spent over a decade working for the Army and Department of Homeland Security as an engineer. In his free time, he said he liked to build things with his hands. like a home brewing set-up.

“(Brewing was) a hobby I took way too far,” Ethan said. “Beer’s got this crazy art and technical science component. You’ve got to be on it science-wise, but then you also have a kind of expression through design and how you manipulate the different tools you have.”

He said he didn’t want to climb the government engineering ladder anymore and started talking with Delaini around two years ago about the brewery idea.

“Our wives knew each other. The bees and the beer seem to go together really well,” Mikesell said. “I was looking for a change of career.”

This process is perhaps highlighted best in the “Whole Hive Braggot,” a 10 ABV brew created with 100 pounds of honey, around what one hive can produce in one year.

Mikesell said yeast chews honey up, creating a high alcohol content but leaving very little nectar left for flavor. To create the honey-flavored beers, he delays when the honey for flavor is put in.

He also said he hopes to eventually serve up mead, a honey-based libation that requires a wine license, as it is classified as a wine.

Delaini has been working with bees for over a decade. He started because of an online job advertisement.

“I wanted to do something different for the summer and I went onto Craigslist just looking for bizarre jobs,” Delaini said.

He said he started as a grunt, stuck around and started an apprenticeship, and eventually became an apiarist, a beekeeper. He moved to the area five years ago.

Mikesell moved up from D.C. recently and still travels back to visit his wife, who is working down there. The CSP mocha stout is one he specially brewed for his wife on their wedding.

Hex and Hop incorporated in April 2018 after months of discussion between Delaini and Mikesell.

“This is Nick and I and traditional loans,” Mikesell said.

“The town has been an unbelievable supporter,” Delaini said.

The two faced some delays in the permitting process on the state and federal level, which just resolved recently. They submitted their federal application 48 hours before the 35-day government shutdown from December 2018 to January 2019.

“We did have some struggles with the timeline with the state brewing license,” Mikesell said. “Apparently they had a very large backlog.”

After a three-month wait, they received the permits two weeks ago. Mikesell said he quickly brewed six batches in two weeks and prepared for the Grand Pouring.

Both Mikesell and Delaini said they want to work primarily with local suppliers. Their own food comes from Northern Feast Catering and North Country Creamery in Keeseville, Sugar House Creamery in Upper Jay, Juniper Hill Farms in Wadhams, Kreature Butcher Shop and Bliss and Vinegar in Lake Placid, and Mountain Tomboy in Keene.

They said they would like to have their property on state Route 3 be a permanent location for local food trucks.