This winter was easy on deer 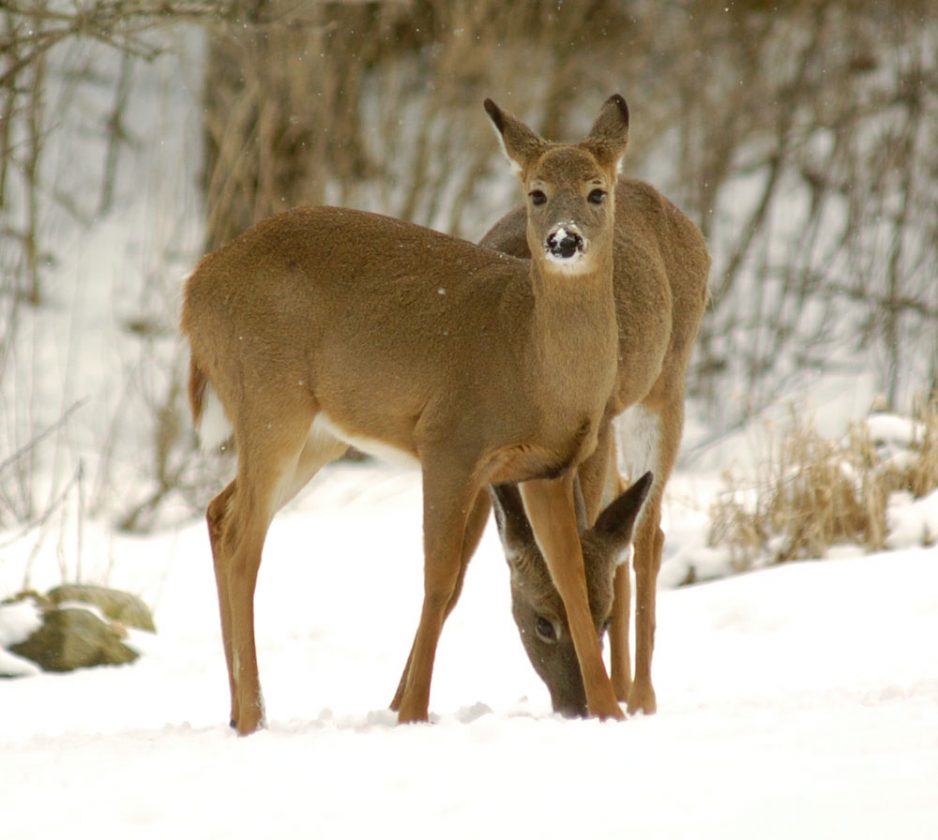 A pair of white-tailed deer browse in the snow near Saranac Lake. (Enterprise photo — Lou Reuter)

Despite a drought and early snow last fall, the state Department of Environmental Conservation said the state’s population of white-tailed deer survived the winter well.

According to the Winter Severity Index, several thaws and warmer-than-average temperatures may have helped deer get through the winter. However, there could be other factors at play in their survival.

“Portions of New York experienced mild drought, which lessened production and nutrition of grasses, forbs, and soft mast (berries, cherries, apples). Then, hard mast (acorns, beechnuts) production was lower than average as well, so many deer went into winter with reduced fat reserve,” the DEC explained in its Hunting and Trapping newsletter. “November’s snowfall was double its average. Deep, heavy snow blanketed much of NY, hampering deer movements to late season food sources. Bucks burned more energy searching for does during the rut as well.”

“The winter severity index (WSI) is a measurement to help gauge the effects of the winter weather on deer survival,” a paper from the Wisconsin Department of Natural Resources explains. “In general, the severity of the winter is based on the total number of points accumulated over the collection period. A winter with an index of less than 50 is considered mild, 50 to 79 is moderate, 80 to 99 is severe, and over 100 is very severe.”

The higher estimated survival rate for deer this past winter comes on the heels of the one of the most successful hunting seasons in years. Last fall, hunters took 12% more deer than in 2017.

In the DEC’s Northern Zone, which covers all of the Adirondack Park, hunters killed 28,642 deer total, with the vast majority of those (20,689) coming in the regular season, which ran from Oct. 20 through Dec. 2 last year. Youths shot 140 deer while adult hunters took 1,565 deer during bow season and 6,248 during the muzzleloader season. Of the deer killed in the Northern Zone in 2018, more than 19,000 were adult males.