Tupper Lakers on the rise 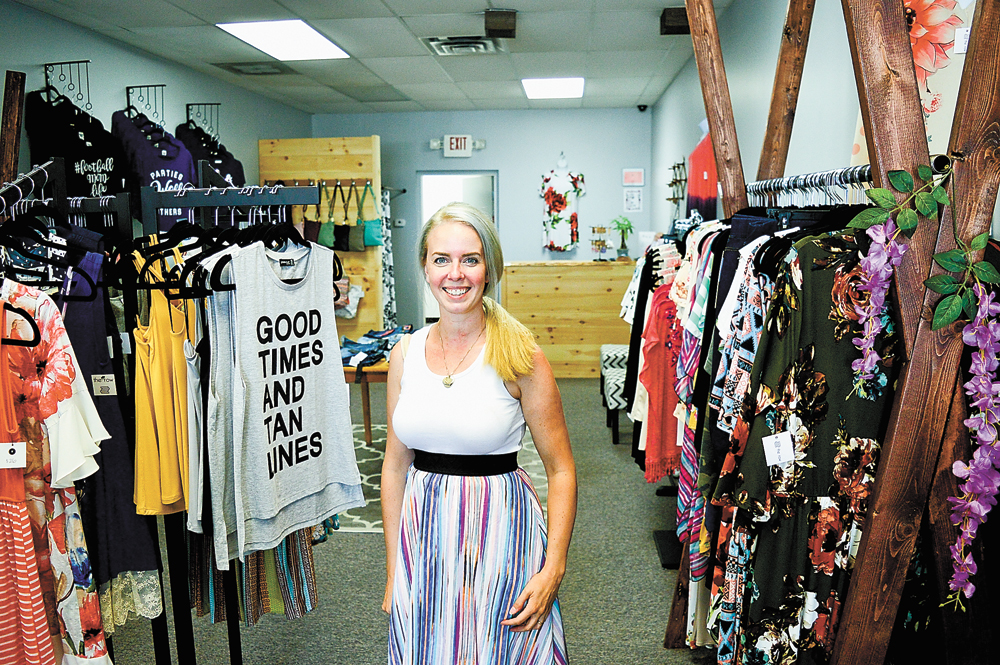 Tupper Laker Emilee Davis stands in her new clothing store The Row on Demars Boulevard. Though she got her start selling garments online, she said she now prefers the friendly atmosphere of a brick-and-mortar shop. (Enterprise photo — Aaron Cerbone)

TUPPER LAKE — Driving around the streets of Tupper Lake, one can see new storefronts popping up each month, with local entrepreneurs introducing new industries or filling gaps in the current economy. These businesses are not just surviving, they are growing.

Places like Raquette River Brewing, with an always-expanding list of new projects, are creating a blueprint for successful businesses in town, and some of Tupper Lake’s younger generations are following suit.

This wave of Tupper Lakers going into business for themselves and bettering the community isn’t just happening in town, Tupper Lakers are also taking the hard working, hopeful spirit of their hometown to start Adirondack-inspired enterprises elsewhere. 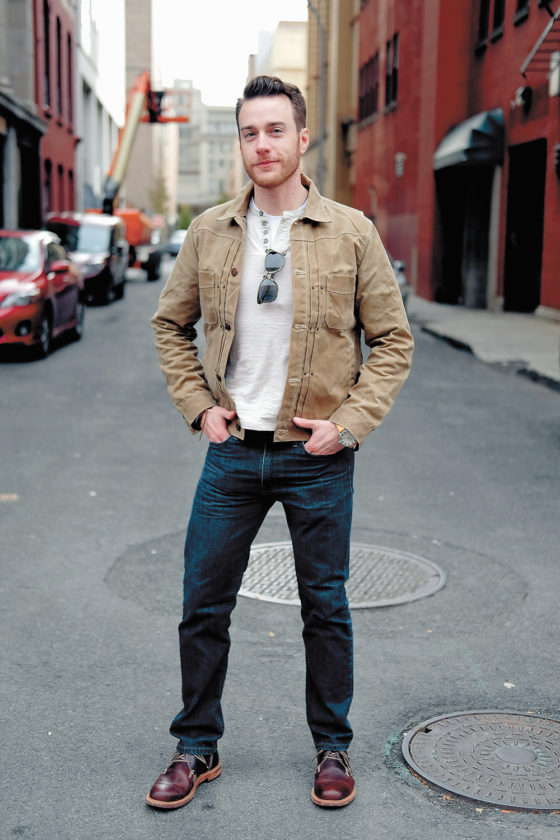 Cliff Carey, who owns a clothing store in Syracuse, said he has always been a sharp dresser, and that his desire to sell durable clothes stems from his childhood living and working in Tupper Lake. (Photo provided)

Cliff Carey wants to change your clothes. More accurately, how you think about clothes.

The 39-year-old owner of the American Reserve Clothing Company in Syracuse rejects what he calls the “throw away” fashion culture of the current world, where garments may be worn a handful of times before they are ripped, faded or just out of fashion.

Carey said he has always had an eye for quality clothes, a trait he picked up from his parents. He remembers his mother and father coming home excited when they found a good buy from a thrift store.

The Americana styles and brands American Reserve carries in its online and physical stores are heavily influenced by his hometown, and he said he developed his personal and business values growing up in Tupper Lake. 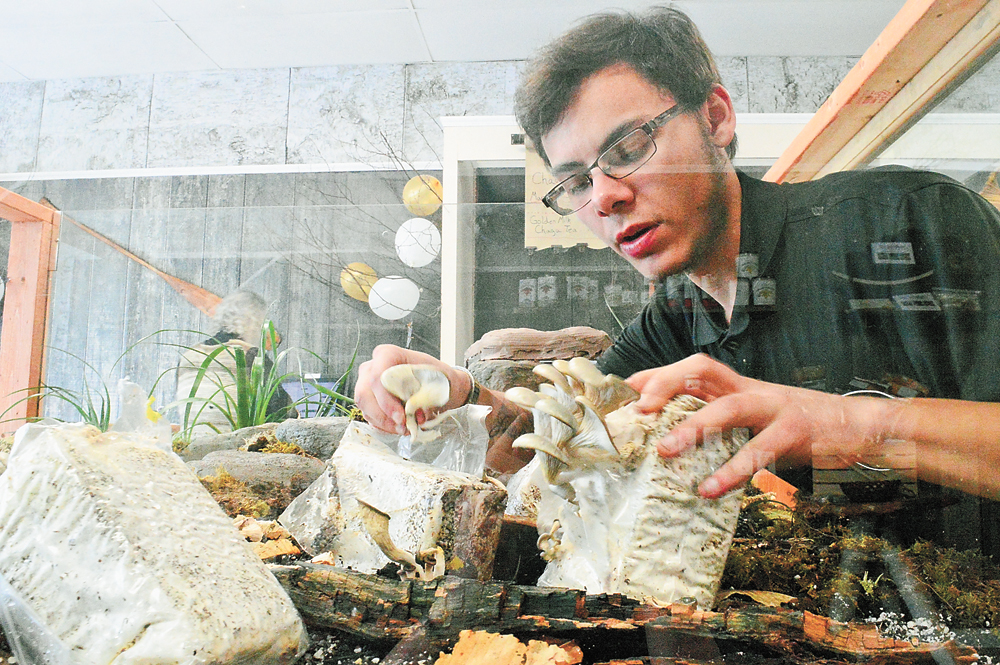 Garrett Kopp, owner of the Birch Boys chaga tea store on Park Street in Tupper Lake, tends to the mushrooms he is cultivating in his in-store terrarium. This terrarium sparks conversations with customers that have inspired him to expand his inventory of fungi teas. (Enterprise photo — Aaron Cerbone)

“You have to rely on community; there’s only so many things in this world that you can do on your own,” Carey said. “You can pick the direction you want to go in … but as soon as you go to act at all, you have to rely on other people. I think small town, rural values engender that feeling of community. That’s a theme that’s consistent in my day-to-day business approach that I know was influenced by where I grew up.”

After graduating from Tupper Lake High School in 1997, Carey studied education at SUNY Potsdam. He thought he’d be an English teacher by day while pursuing a literature career in his free time. Realizing that wasn’t the right reason to get into a career, he changed his focus to business and became an efficiency specialist in the medical field.

He worked in health care for around a decade before leaving the corporate world in September 2017 to focus on American Reserve.

The company is a clothing aggregate, assembling around 35 vendors online and in a Syracuse storefront, with each line personally selected by Carey for their aesthetic, quality and production methods.

“You can really change your own mindset when you are wearing clothes that make you feel good,” Carey said.

Carey’s goal is to get Americans out of the habit of buying cheap clothes meant for short use.

“It’s a lot easier to throw something away if it’s cheap,” Carey said. “However, it is much easier to invest in well-made clothing when you are aware of some of the statistics.”

The average American produces 81 pounds of clothing waste annually, according to the 2018 State of Reuse Report from Savers, a global thrift retailer. Under 3 million of the 16 million tons of clothing in landfills is recovered for recycling annually.

Carey said the dyes, plastics and synthetic material in these garments do not biodegrade, and that even clothes donated to Goodwill or the Salvation Army end up in landfills if they do not sell.

Tons of clothes are also shipped to third-world countries, where they hurt existing local markets of garment makers, Carey said.

“Imagine being in a small Caribbean Island country or maybe a Central American country or an African country and you are a dress maker or a garment maker. Suddenly this huge container of free clothing gets dropped into your area. Your ability to sell your clothing is completely ruined,” Carey said.

He also said cheap clothing often depends on companies that take advantage of workers in poor counties like Bangladesh, Vietnam or Cambodia, who can work 16 to 18 hours a day for $2 to $3 a day.

Carey said he has standards for the brands he works with, wanting to sell long-lasting, stylish and responsible clothing. As a result, he works mostly with small batch garment manufacturers.

Though he was not traditionally trained for business, Carey learned through experience and relationships.

Carey’s business has grown quickly in its first few months, with a physical location in Syracuse, plans for a Buffalo shop in late 2019, and possible locations in Albany, Boston and maybe even Europe in the future.

Carey still gets to use his literary skills. He prefers that his company and its products to tell a story — a narrative he hopes will improve the way the world buys clothes.

When Tupper Lake resident Emilee Davis opened The Row in early May, she filled a need in the town’s economy as the town’s only firsthand clothing store.

The women’s clothing boutique now sees around 10 to 20 customers a day, and Davis is starting to think about how to grow the business by getting back to her roots.

She sold clothes over the internet while raising her three children, who are now ages 2, 5 and 7, but when mailing packages from the post office daily became tiresome, she decided to share her connections and style with Tupper Lake. She bought sun dresses, leggings and tank tops from vendors in Los Angeles, mostly getting American-made clothes and staying updated on emerging trends.

Davis wants to grow her social media presence, adding the ability to make sales over Instagram and entering a national marketplace. However, she is loving the human connection running a brick-and-mortar store allows.

“The cool thing about online is you can get nationwide, but it doesn’t match doing it in person. You get to see the people, you get to interact with them and say, ‘Try this on,'” Davis said. “It’s so much more rewarding to see people in the flesh I think.”

Whether it is helping seniors find a nice dress last minute on graduation day, calling up a regular to let them know a new pack of leggings arrived or seeing people excited to have a clothing shop in Tupper Lake, Davis said she feels like she is contributing to the community through her business.

Most Tupper Lakers buy clothes online, Davis said, without a chance to try them on and feel the fabric.

Boutique brands like Pink Lily, which Davis used to buy online because no one in the area sold it, are now featured at The Row. Though the store sees customers coming from out of state, and from as far away as Israel, Davis said she has received overwhelming positive response from Tupper Lakers who want to shop local instead of online.

“The majority of people shopping here are locals; they’re the ones that are going to keep this business running,” Davis said. “It’s not the tourists, it’s the people that live here.”

Running a clothing store in a town of around 5,000 is a little different than in a city. Davis said she splits packs of clothes with friends who run online boutiques because with a couple thousand women and girls in the area, she wants to keep her inventory varied.

“You don’t want to run into everybody that’s wearing the same thing,” Davis said.

After two months of running the shop, Davis is as happy as the day she opened for business.

“It doesn’t even feel like a job sometimes,” Davis said

When Garrett Kopp, 20, dropped out of Clarkson University in 2015 to start selling mushrooms he asked himself over and over, “Is it worth it?”

He learned quickly that starting his chaga mushroom tea business, Birch Boys, was hard work, but hard work, he said, is in his blood.

“In Tupper Lake, everyone is sort of a do-it-yourselfer,” Kopp said. “Even if they don’t have a registered LLC or trademark or something, everyone around here kind of seems like a bit of an entrepreneur.”

Kopp started selling the fungi at farmer’s markets and online in 2015, eventually driving across six states to find over 100 grocery stores willing to carry his teas. The business has not been thriving by chance. Kopp said with all the paperwork, people to talk to and tasks to be done, it is hard for him to find time to sleep.

Kopp said the storefront has become a headquarters for his team of business partners and mushroom enthusiasts, bringing them closer personally as well as physically. Most of the people he works with are also in their 20s, friends from high school or college, and the Park Street location brings their community together while connecting them with the greater Tupper Lake community.

“The tight-knit community is a really strong support group,” Kopp said. “There’s just this overwhelming sense that everyone here has your back.”

Kopp said that having a storefront on the main street of a town Tupper Lake’s size is incredibly convenient. He can walk to Stewart’s for emergency supplies, the post office for shipments, his insurance agency for information or the Chamber of Commerce for coordinating events. Well Dressed Foods, just a few doors down on Park Street, often sends customers his way.

Kopp said moving from selling primarily in grocery stores and online to a storefront provides him with unique, intimate experiences day after day, as he never knows who will walk through the door.

Interacting with customers face-to-face can help and hurt, Kopp said. Some people can be outright mean, he said, but it is important to hear what he can do better. He attributes people commenting on the mushrooms he grows in a large terrarium in the center of the store with inspiring him to start a reishi mushroom line of teas.

“People came in and they would say, ‘Oh my gosh, I see this all the time when I’m hiking,’ so then I kind of went on a quest for red reishi,” Kopp said. “Without opening the store I don’t know if we would have really gotten into that.”

The reishi line will hit the shelves soon, and Kopp said the fungi has the opposite effect of chaga, and is calming and relaxing. The company also recently received a 200,000-acre land contract for exclusive harvesting rights in the Adirondacks.

Kopp still questions whether all his work is worth it, but part of being an entrepreneur, he said, is ignoring that question.