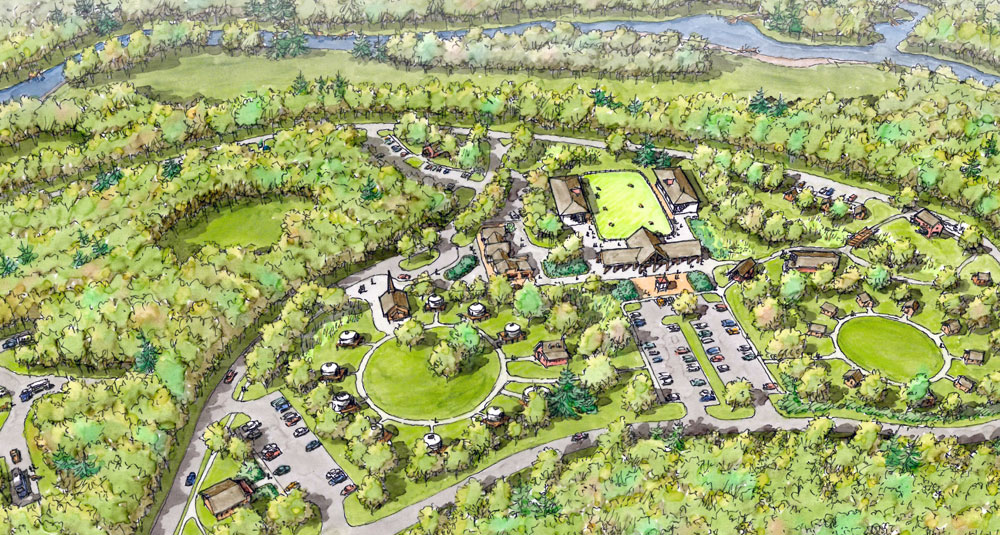 This illustration shows what a state-sponsored development at the former Frontier Town theme park in North Hudson might look like. The Schroon River is in the background. (From Upper Hudson Recreation Hub Master Plan by Chazen Companies, Open Space Institute, Saratoga Associates)

Gov. Andrew Cuomo on Monday released a master plan for a $32 million “Gateway to the Adirondacks” at the former Frontier Town theme park in North Hudson.

Local newspapers, including the Enterprise, broke the news on Jan. 12 after the governor’s office released its 2017 State of the State book, which included the proposal, but Cuomo waited until Monday to formally announce it at a press conference in Plattsburgh.

The plan for 300 acres at Exit 29 of the Adirondack Northway (Interstate 87) will include a visitor information center, a state Department of Environmental Conservation campground and day-use area along the Schroon River, an equestrian center, an event center with tourist accommodations and facilities for hosting shows and festivals, areas designated for commercial business development and historic interactive exhibits about the Adirondack Park.

According to the Upper Hudson Recreation Hub Master Plan, the project is intended to compete with other national ecotourism venues, provide services and amenities not currently supplied in the region and provide for high-intensity and low-impact recreation.

“The Gateway to the Adirondacks will be a world-class tourism hub at a strategic location to attract new visitors to the Adirondack Park and drive economic growth in the North Country,” Cuomo said in a press release. 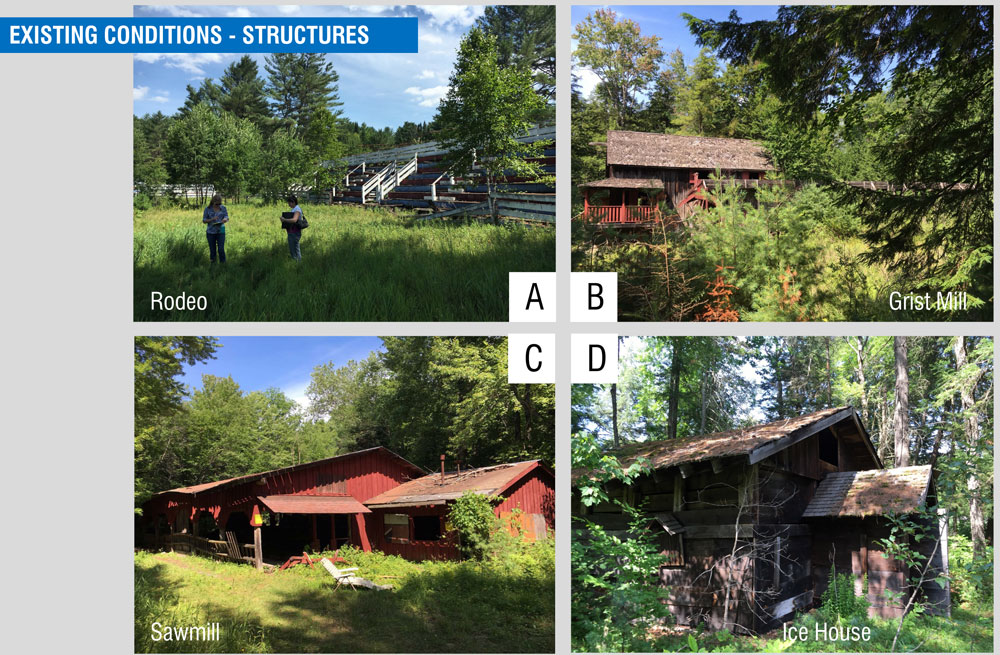 These pictures show the recent state of former Frontier Town theme park structures that are intended to be reused under a new, state-sponsored master plan for the property. (From Upper Hudson Recreation Hub Master Plan by Chazen Companies, Open Space Institute, Saratoga Associates)

Over at the Frontier Town site on Monday, DEC Commissioner Basil Seggos, Deputy Commissioner Kenneth Lynch, Director of Division of Lands and Forests Rob Davies and several other DEC staff members took a tour of the property to be developed, alongside Essex County Board of Supervisors Chairman Randy Preston.

Preston said Seggos left North Hudson “very enthusiastic about getting this project underway” after seeing in person how salvageable remnants of the amusement park seem to be, such as the covered bridge, saw mill, grist mill and chapel.

The wild-west-themed Frontier Town was built in 1952, part of a wave of roadside attractions in the Adirondacks, and has been closed since 1998.

“It’s just very unique,” Preston said. “(Seggos is) chomping at the bit to get going. … It was all positive — amazingly positive.”

Equestrian, camping and associated parking and trail facilities are expected to be developed first. 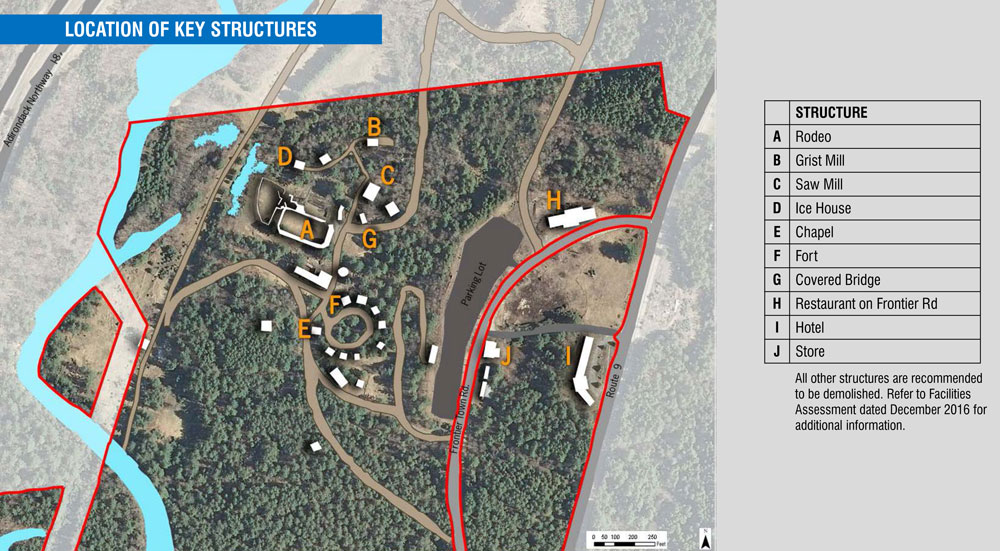 This map shows the locations of former Frontier Town theme park structures that are intended to be reused under a new, state-sponsored master plan for the property. (From Upper Hudson Recreation Hub Master Plan by Chazen Companies, Open Space Institute, Saratoga Associates)

The equestrian hub would also have parking and camping as well as outdoor riding arenas, an events space, short-term-use covered stalls and tie stalls, turn-out areas, manure pits and utilities.

The visitor center, in addition to tourist information, could be used by regional organizations or to show off local products and artists.

Paradox Brewery, based in Schroon Lake, plans to build a production facility as well as a saloon offering beer and food at the location. The governor said the brewery will invest $2.8 million and create 22 new jobs, with the assistance of $200,000 in performance-based incentives by the Empire State Development Corporation.

“Paradox Brewery has been looking for land to expand operations, and we believe this opportunity in North Hudson is the perfect fit,” president and founder Paul Mrocka said. “This new location, at the foot of a trailhead, fits well with our Adirondack theme.”

The state would preserve existing site features including the land around the gravel pit for town use and the parking area off of Frontier Road for appropriate uses. It would also utilize the floodplain for low-intensity uses, day use, open space and festivals.

Among the state’s next steps are to refine the configuration and scale of development based on detailed site investigations, develop preliminary plans to identify and address site conditions, refine programs relative to funding, and establish an implementation timeline.

Other next steps are to finalize details as to how parcels of the property will be developed by easement, have final discussions on what old buildings to save, and explore the options for bringing water to the site, as the property currently lacks water and sewage infrastructure, Preston said.

The governor’s office said earlier this month that DEC will buy a conservation easement on approximately 300 acres of land, using the Environmental Protection Fund. This will allow construction of the campground as well as a DEC equestrian camping and trail riding area.

Preston added that since Cuomo’s announcement of the Frontier Town plan earlier this month, new private investors have expressed interest in bringing their businesses to the site, though Preston declined to name who.

“It’s people connected with the camping business,” he said. “It’s very real, is what I will say.”

The state-sponsored development would not take place on the property where Frontier Town’s landmark A-frame buildings still stands — that’s owned by the family of the late George Moore of Keeseville — but rather on property south of that, owned by Essex County and the town of North Hudson.