CONCORD, N.H. — Supporters of a regional pact that would tackle transportation emissions are struggling to win over several New England governors concerned that the climate change initiative will increase gas prices.

After the Transportation and Climate Initiative was announced last month, New Hampshire’s Republican Gov. Chris Sununu said the state won’t join, citing fears of a gas price hike. Vermont’s Republican Gov. Phil Scott said he couldn’t support the initiative if it amounts to a tax on carbon. A spokesman for Maine’s Democratic Gov. Janet Mills said states like Maine have unique transportation issues and will be “appropriately cautious.”

The initiative is aimed at a dozen Northeast and mid-Atlantic states and would take effect in 2022. It would address pollution from transportation — which represents 40% of greenhouse gas emissions in the region, the largest source of emissions. The area has tens of millions of registered vehicles.

New Jersey has not committed to implementing the initiative while a spokesman for Democratic Gov. Ned Lamont said his administration was still examining it. Virginia is also reviewing the draft memorandum.

“I am happy to see that other Governors are following my lead in rightfully sounding the alarm on this new gas tax,” Sununu said in a statement. “New Hampshire is proof that the best environmental stewardship can be achieved without massive tax schemes.”

Many of the states, including New York, are already part of the Regional Greenhouse Gas Initiative, which covers 10 states in the Northeast and mid-Atlantic and targets emissions from the power sector.

Under the Transportation and Climate Initiative, wholesale fuel companies would be required to purchase pollution allowances at auction. The sale of those allowances could generate billions for states to invest in carbon-reducing transportation options — like electric buses, electric car charging stations, bike lanes and sidewalks.

The initiative could lead to emissions reductions in the region by as much as 25% by 2032. But the opposition appears be around a potential gas price hike. If fuel companies pass the cost of the allowances onto consumers, the price of gas in the region could climb by five cents to 17 cents per gallon in 2022, when the pact would take effect.

Among the pact’s opponents is Americans for Prosperity, the advocacy group founded by the billionaire Koch brothers. The group’s New Hampshire chapter came out against the TCI the same day as Sununu, calling the initiative a top-down government mandate that would “punish hardworking Granite Staters.”

Supporters of the initiative said the fears over gas prices are overblown and ignore the agreement’s potential benefits.

“Personally I think this is political grandstanding,” said Timmons Roberts, a professor of environmental studies at Brown University. “This is the incremental change, it would be over 12 years. This is just using a well-meaning effort as a whipping boy.”

But Roberts and others acknowledge that the pact needs to address the concerns of low-income and working families who must drive long distances for work or school.

“Some people positively opt into this lifestyle, but many don’t. They live where they live because of family, lack of economic mobility, or other factors,” said Jason Veysey, the deputy director for the Stockholm Environment Institute’s energy modeling program.

“People who have to drive may be negatively affected by an increase in fuel prices,” he said. “However, it’s worth underlining that TCI is supposed to be a cap-and-dividend program, in which higher costs for the most vulnerable are mitigated by the dividends.”

The pact has been praised by many of the region’s business, health and environmental leaders, including Massachusetts Republican Gov. Charlie Baker. He touted the pact in his State of the Commonwealth address last week as part of his plan for the state to reach net-zero greenhouse gas emissions by 2050.

J.J. Abbott, press secretary for Pennsylvania Democratic Gov. Tom Wolf, said the state was “committed to being a part of the TCI conversations,” but would make no decision on joining “until the program is fully designed.” Josh Block, a spokesman for Rhode Island’s Democratic Gov. Gina Raimondo, said she is “fully committed to the goals of the Transportation Climate Initiative,” but that the specific statutory and regulatory changes needed to meet those goals “will be the source of public discussion and input over the coming year.”

According to information on the TCI website, modeling has showing public health benefits of as much as $10 billion annually by 2032, including over 1,000 fewer premature deaths. It would also generate up to $7 billion annually that could be invested into expanding transport choices for rural, urban and suburban communities.

“Without any viable alternative to this program, the states will not be able to achieve their climate goals,” Stutt said. 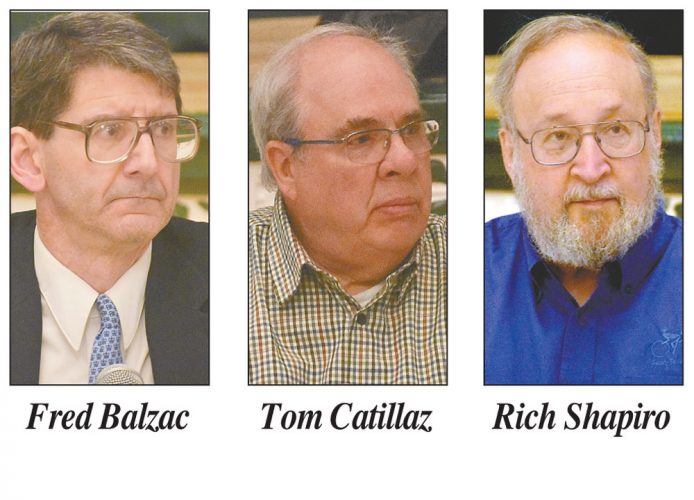 Jeff French, who had filed with the state Board of Elections to run as a candidate for New York’s 21st ...

WASHINGTON — The two doctors spread out their charts on the Resolute Desk in the Oval Office. The projections ...