A friend, a veteran with PTSD, died of an overdose 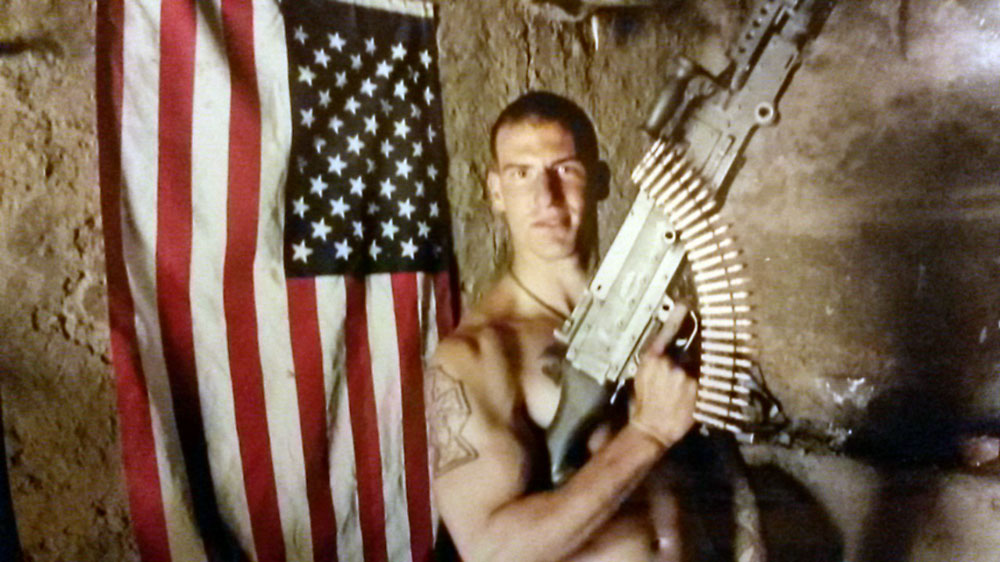 Justin Ropke is dead. I consider him a friend although there are several who are in a better position to write this than I am. Nonetheless, the small portion of his story I know should be shared.

He was a musician. An artist. A storyteller. An athlete with a Division I baseball scholarship. A champion high school quarterback. In his journal, empty except for a few paragraphs, he described himself:

“A veteran, A fatherless son, A cancer survivor, A heroin addict.”

I’m unsure of where his death will fall as a statistic. Likely as an opioid overdose. But that would mask the true nature of his death. It is more accurate to say that he died as a Marine in Afghanistan. As part of the Corps’ 3/2 scout sniper platoon. In Helmand province. Where he did and saw all things war and where he was exposed to drugs — the former driving the need for the latter.

I’m unsure of his thoughts on the war in Afghanistan before he served. But after he served, he was against it.

“You can’t just give a 19-year-old a rifle and tell them to go, kill everything.”

Justin’s best friend, Marine Corps Sgt. Mark Bradley, was killed by an IED. Wounded in Afghanistan, he later died in the United States.

“I have medals. I have accolades. I’m the elite of the elite, I need you to know this about me. I’m the upper 1%. I’m a murderer. I’ve killed more people than I have fingers or toes.”

It was Justin’s platoon that made headlines for the video surfacing of Marines urinating on dead Taliban fighters in late 2011. The enemy were killed while planting roadside bombs. The same type of bombs mentioned above and the same type that killed another Marine just prior to the video. The Taliban strung that Marine’s body parts from a tree. Sgt. Robert Richards, identified in the video, was publicly castigated and officially court-martialed. He is now dead. He survived wounds from an IED blast but was killed by an accidental overdose of his prescribed medications. A veteran of three tours in Afghanistan, he is now buried at Arlington National Cemetery. His story helps to explain Justin’s story.

Justin once walked into the barracks in Afghanistan to see a friend using a knife trying to amputate his own arm. Justin would also tell the story of the time he shot a shepherd. He watched through his scope as the man’s daughter tried picking up the pieces of the brain and skull — a macabre version of Humpty Dumpty.

“I’m an innocent murderer living here today scot free. Because that’s what you wanted me to do. You gave me medals and ribbons. You gave me pats on the back and ruffled my hair and I murdered people. Now send me back to civilization? Send a murderer back. Murder is murder. No matter what continent it’s on or thousands of miles away, it still does something.”

“Ended up drinking a handful of tallboys and blew $400 on scratch off tickets. It’s the adrenaline I suppose, it’s just a release, and I need it to get through the day. Skipped the gym and watched a bunch of movies. I really don’t like myself.”

The multiple MRIs and CT scans of Justin’s brain showed, literally, that his brain physically changed from the war. Can one ever be the same with a changed brain?

On my way to work on Wednesday, I saw an ambulance and police car racing down the road in the direction of his apartment, and I wondered for a brief, non-serious moment if they were for him. Later that afternoon, my fleeting thought became a reality. We went to his apartment that evening. We didn’t know and don’t know how it works — does his mother have to come to get his belongings? We just wanted to make it decent for his mother. I didn’t want her to see anything drug related. Typing that seems idiotic. Her son died of a drug overdose, she knew and knows about his addiction, but still, we wanted to help in some way. A friend took his guitar — we didn’t want it to disappear — and will deliver it to his mother.

There were no illegal drugs. But bottle after bottle of prescription drugs. All prescribed, roughly 10 pills a day, to treat his PTSD, identified from the military paperwork thumb-tacked to the wall as “9411 Post-Traumatic Stress Disorder.” The picture at the top of this page was next to the paperwork. In the corner, a syringe of Narcan, designed to save those in the midst of an opioid overdose.

The same friend with the guitar, a friend to Justin who helped him as best he could and perhaps as best as anybody could, said this, choking back tears in the back seat of my car: “He just wanted to be normal. Like you and me. He wanted to live so bad, and he tried so hard, but he couldn’t beat it. He wanted a family, kids. He didn’t want to die. He didn’t want to die.”

Of course he didn’t. The world he lived in made it hard. He lived in a world where people do not even know what IED stands for. Do not know what Helmand province is or what it stands for. In a world that saw President Obama escalate the war in Afghanistan, having over 75 percent of that war’s casualties occur during his time in office. In a world that now has the Taliban and other similar factions controlling 85 percent of Helmand province — a troop surge for no purpose.

A world where the media cavalierly calls Al-Qaeda “rebels” in Syria. A world where, despite the majority of America’s heroin coming from Mexico, one is labeled a racist for wanting to secure the border. A world where during the election cycle of 2016, despite thousands of hours of coverage, the war in Afghanistan was forgotten. In a world that shares memes that say the U.S. does not have any major wars, despite U.S. service members still dying in them. Despite the U.S. dropping over 30,000 bombs in 2016.

He was trying to live in a world where people are asinine enough to suggest a war can be minor. Are we truly that naive?

He was trying to live in a world that, when it chooses, will endlessly discuss Obamacare, or Trumpcare, or Ryancare, but nobody seems to care that the Veterans Administration still has staffing shortages. Still has long wait time for veterans to receive care. Still has substandard facilities. And despite 20 veterans dying of suicide each day, still has a suicide hotline with 30-minute delays.

He was trying to live in a world where his platoon only made national headlines after the 39-second urinating video become public. Not for any of their missions. Not for amassing 223 confirmed kills. Not for innovating sniper and tank tactics. Not for acts of heroism. Not for when team leader Sgt. Nate Hervey was awarded a Bronze Star with valor. Just for the video.

He was trying to live in a world in Saranac Lake where the town rallied behind the cause to help a man, who happened to be Muslim and from India, obtain a travel visa after he was previously denied. He was heralded as a mini-celebrity and prominently featured in the local paper. Within days, he was arrested for sexually assaulting a 12-year-old. This is the same town that just this week became outraged at the prospect of St. Joseph’s Addiction Treatment and Recovery Center needing to relocate. Residents did not want the patients in their neighborhoods. Justin was receiving treatment at St. Joe’s. He was never made into a celebrity; he has never been in the paper. Agree or disagree. Neither here nor there, perhaps. But these things do not make this world easy for someone like Justin. Maybe nothing could.

Justin is dead. And it is horrible. Another victim of war. Truly, another victim of 9/11. As for the political speak in this commentary, don’t worry. Justin would have approved. He loved to hate politicians. He said he’d rather kill 10 corrupt politicians than one Taliban member. Semper Fi, Justin.

Nicholas Pepe lives in Keene and works as head of the special education program for the Saranac Lake Central School District. (Editor’s note: Pepe’s job title has been corrected.)

(Editor’s note: We made an exception here to the Enterprise’s 1,000-word limit for Guest Commentaries. This essay merited it.)