Northern New York bear hunting up, down in south 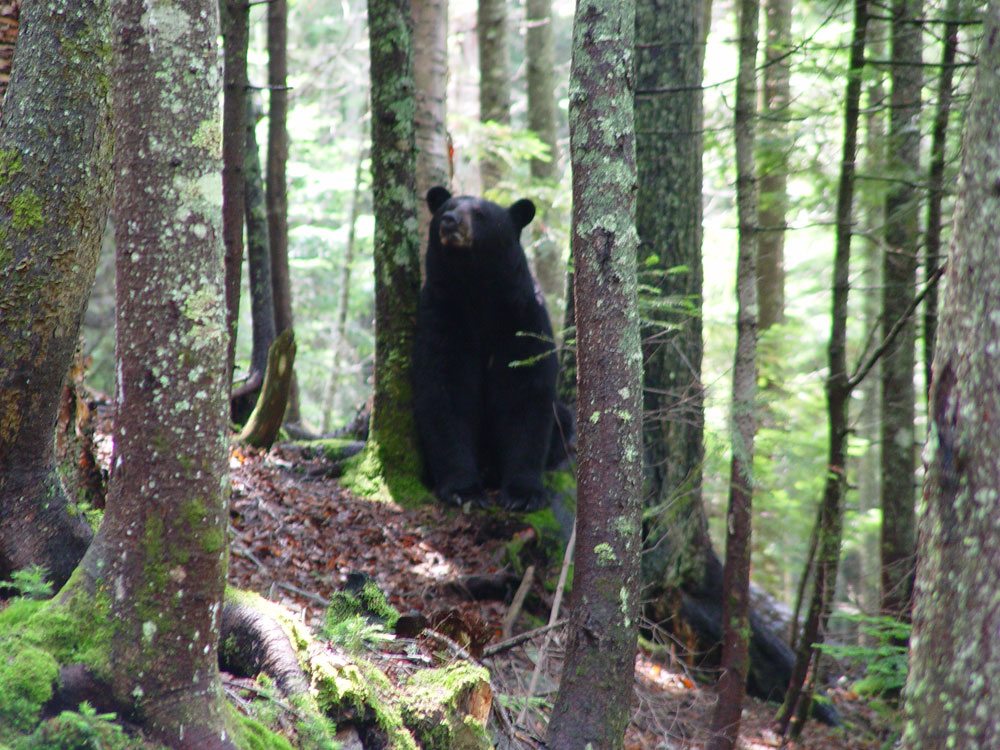 A black bear is seen near Lake Colden in July 2004 in the High Peaks Wilderness Area of the Adirondack Mountains. (Photo provided)

The state Department of Environmental Conservation released its bear hunting numbers from 2018, and despite taking more than 1,500 bears, hunters harvested fewer than they did in 2017, statewide.

However, in the northern zone of New York state, which covers all of the Adirondacks, hunters took more bears last year than in 2017 — 491 compared to 383 the year before.

The DEC explained in a press release that due to a lack of forage last year and heavy snows late in the fall, many bears went into their dens earlier than normal. The department said early season and bow hunting numbers were on par with 2017.

A spokeswoman for the department said a review of hunting license sales also shows a downward trend, similar to that seen with deer hunters in recent years.

“Based on hunting license sales, there has been a slow, gradual decline in hunter numbers. But it is not declining at a rate fast enough to affect deer and bear management,” DEC spokeswoman Lori Severino wrote in an email. “The primary tool for managing bear populations is hunting, but there are also other components to bear management such as guidance for the public to encourage behaviors that will minimize the chance that they have negative encounters with bears (e.g., properly securing food and trash).”

Ulster County was home to a lot of bear action last year, with a 585-pound bear — the largest reported — and a 550-pound bear each being taken in the county. The DEC’s wildlife management unit that covers Ulster, along with parts of Greene and Sullivan counties, also had the greatest bear harvest density, with one bear being taken for every 1.5 square miles of land, compared to an average of 3.2 square miles per bear statewide.

The biggest single day for bear hunting in the state was Nov. 17, opening day of the regular season in the southern zone, when 80 bears were harvested.

While the 585-pound bear in Ulster County was the heaviest reported in 2018, hunters also bagged a 485-pound male and a 400-pound male, both in St. Lawrence County.

In the 11 counties that are either wholly or partially within the Blue Line, hunters took down a total of 454 bears. St. Lawrence County led the way with 81 bruins harvested, followed by Lewis with 63. Hunters in Clinton County took 46 bears, and 45 were taken in each of Herkimer, Essex and Warren counties. Franklin County provided 38 bears, Hamilton had 31, Fulton County had 28, Oneida had 19, and Saratoga County had 13 bears.

According to a press release sent with the annual report, 9 percent of hunters who harvested bears were from out of state, coming from 19 states as far away as Washington. Six tagged bears were also shot during the 2018 hunting season, with three of them tagged in New York, two from New Jersey and one from Pennsylvania.

Hunters also submitted to the DEC teeth from 767 bears for age analysis. Any hunter who submits a tooth is given a Black Bear Management Cooperator patch. The DEC said age analysis from the submitted teeth is expected to be available later this year.

Severino said this information, along with surveys of hunters and landowners, helps guide management of black bears in the state.

“Bear populations are not evenly distributed across their range in New York State,” she wrote. “In some regions, the goal is to reduce populations from the current level, while in others the goal is to maintain a low to moderate population density. In general, areas of the state that include a greater proportion of agriculture or have higher human densities are less suitable for bears due to the higher likelihood of human-bear conflicts.

“The information from this survey will be used in conjunction with biological data about bear abundance and information on conflicts between people and bears to refine population objectives for various parts of the state. Results of the survey are currently being analyzed by CCSS and DEC’s big game biologists.”

To read the full report and view the last 10 years of bear and deer hunting reports, go to www.dec.ny.gov/outdoor/42232.html.