Powassan virus on the up-tick

The pipette and vial used to take a sample of deer blood come in a kit with rubber gloves and a cloth. These kits were used by Paul Smith’s College students to research the tick-borne Powassan virus. (Enterprise photo — Aaron Cerbone) 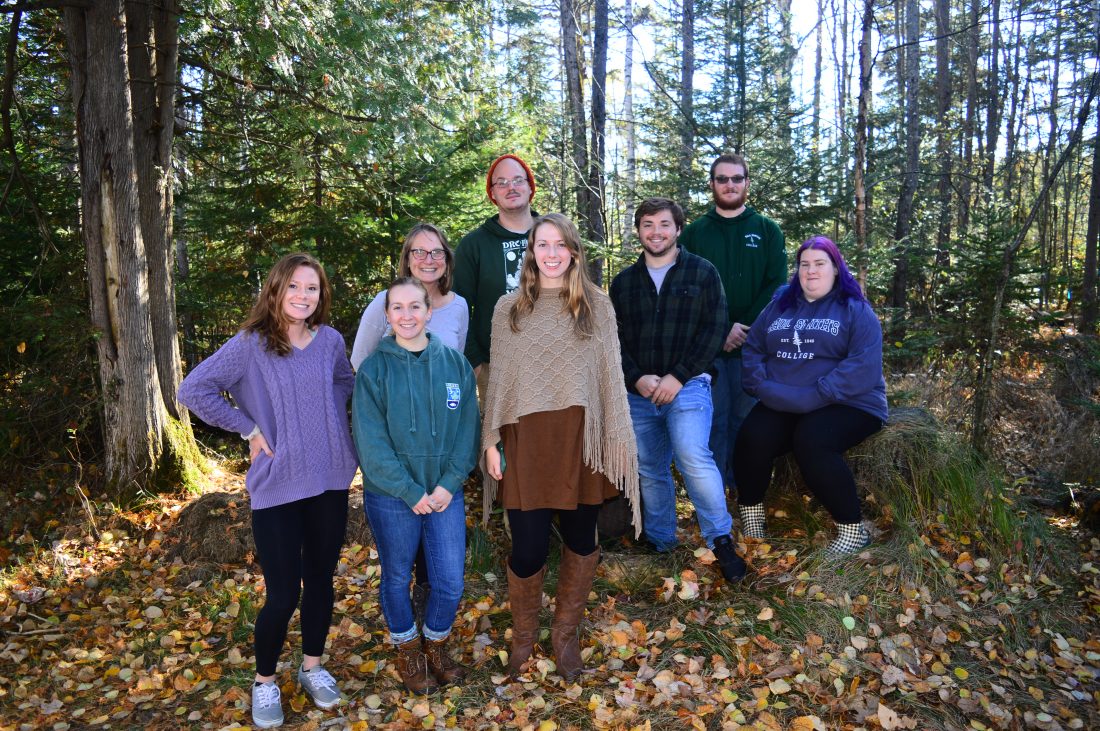 PAUL SMITHS — A group of Paul Smith’s College students, researching the tick-borne Powassan virus for the state, has discovered that the disease is prevalent throughout the North Country.

Though professor Lee Ann Sporn said research on the Powassan spread is just starting, the group may lose its state funding in March.

“This was completely student driven,” Sporn said. “The state Department of Health was incredibly pleased with what we were able to do.”

The study involved students — funded by the state Senate Task Force on Lyme and other Tick Borne Diseases, and doing research through the Adirondack Watershed Institute — working with deer processors and hunters from St. Lawrence, Franklin, Essex, Clinton, Washington and Warren counties to establish the northern edge of the Powassan virus’ reach. 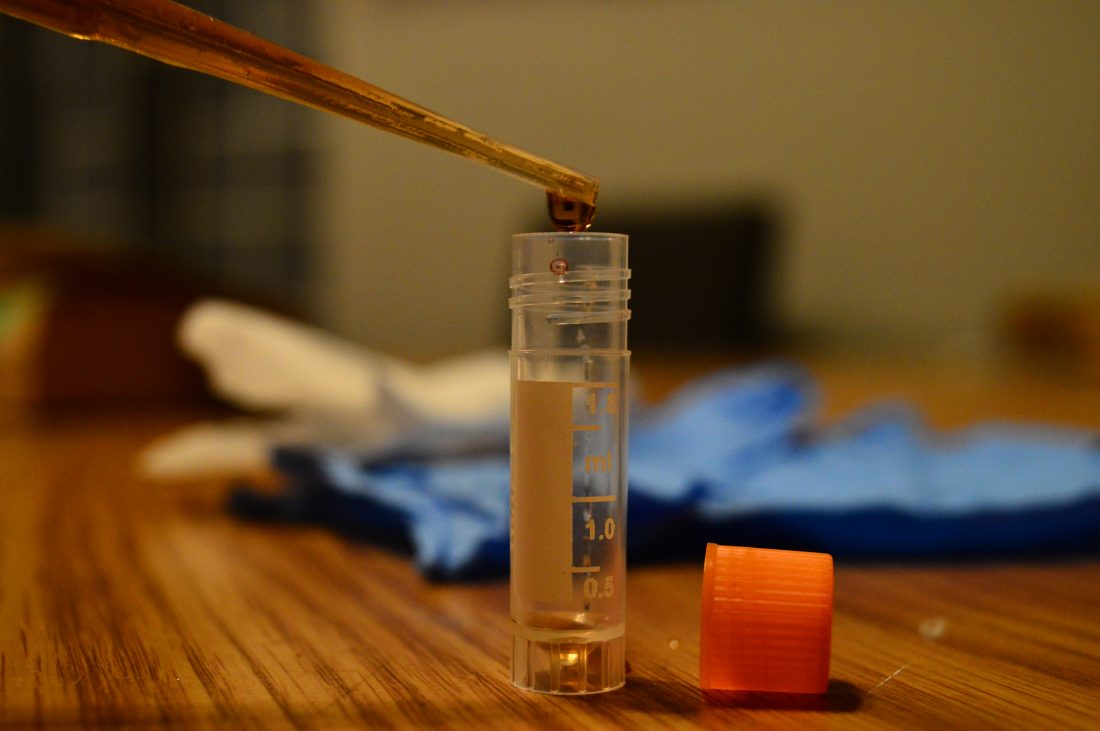 The pipette and vial used to take a sample of deer blood come in a kit with rubber gloves and a cloth. These kits were used by Paul Smith’s College students to research the tick-borne Powassan virus. (Enterprise photo — Aaron Cerbone)

“The punchline is there really wasn’t a northern edge,” Sporn said.

Powassan does not affect everyone exposed to it, but the ones who are effected can develop a serious brain infection, for which there is no vaccine or antibodies. Powassan has a 10 percent mortality rate, mimics dengue and can be misdiagnosed as the flu. Those who recover from it can often have neurological damage.

The transfer of Powassan from a tick to a human can take as little as 15 minutes.

Powassan is often found in the ticks and deer of southern New York. However, until around two years ago it was unheard of in the North Country.

“In some areas of the state (the south) nearly all deer have antibodies to Powassan,” Sporn continued.

Despite its high prevalence in deer, Powassan is rarely found in humans.

There are under 50 human cases of Powassan ever recorded in New York. However, nine of those were in the past two years, including three in Saratoga County in 2017, one which was fatal.

Powassan-carrying ticks are also pretty rare. Sporn estimates that less than 1 percent are positive in the Tri-Lakes area.

Students tested deer blood because it acts as a sentinel for Powassan in the area. Deer can be bit by thousands of ticks over their lifetime, and once a tick with Powassan bites a deer the deer creates antibodies in its blood which last the rest of its life.

The blood came from samples collected by processors such as Woods and Water and Blue Line Sports, outdoors stores in Saranac Lake, individual hunters and processors around the North Country. Sporn said she wanted to thank everyone that contributed to the study because she was able to get around 100 samples, evenly spread around the park.

“We wouldn’t have done that without the processors,” Sporn said. “What they did provided so much important information.”

Sporn said she doesn’t want this new information to cause panic, but said people shouldn’t be cavalier about it either.

“It doesn’t mean that people are going to get the disease, because there are other places where ticks test positive and no human cases show up,” Sporn said. “No one really understands the relationship between positive ticks, positive deer and human cases.

“Just because you’re exposed doesn’t mean you’re going to get sick,” she added. “The risk to humans is incredibly low.”

To avoid being bitten, Sporn recommends dressing to cover all lower body skin, wearing repellents and being knowledgeable of where ticks will be.

She said to tuck pants into socks, wear light colors to easily see ticks and be aware when walking through high grasses. She said the locally made repellent Wild Wood is effective.

Sporn said it is okay to eat and touch deer infected with it.

The study was funded through the state Senate Task Force on Lyme and other Tick Borne Diseases, a Republican initiative, with the support of state Sen. Betty Little, R-Queensbury. It is up to the majority party to organize the task force. Democrats took the Senate majority in last year’s election and has not done that yet.

Last year Sporn said she received $30,000 in funding from the task force, including $5,000 for the Powassan project. She is asking for the same level of funding this year.

Sporn said she has been contacting Senate Democrats using a list supplied by Little. Funding will need to be secured for the task force and research by the time the state’s budget is voted on April 1.

Sporn said this research is important for human health in New York, and that it is about catching things early and preempting a health emergency. She wants to research the spread of the virus for several years to see what patterns emerge.

“If you don’t watch over a long time, you may never see that happen,” Sporn said. “I really wish we had done this a few years ago.”

The project also translates its results into public information and literature provided to health clinics and medical professionals to educate them and the public about tick-borne diseases. There is a fair amount of rejection of the research that shows Lyme disease has spread into the Adirondacks by the medical community.

Sporn said she has talked with the Cloudsplitter Foundation about continuing with private funding. She said the Paul Smith’s students have created a good model for other schools to use to research Powassan or other tick-borne illnesses. She said she has not seen research on if the virus has spread into Vermont or Canada. 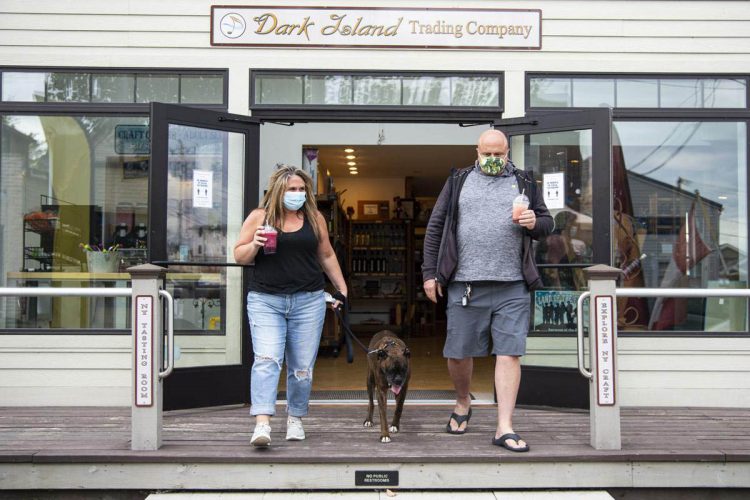