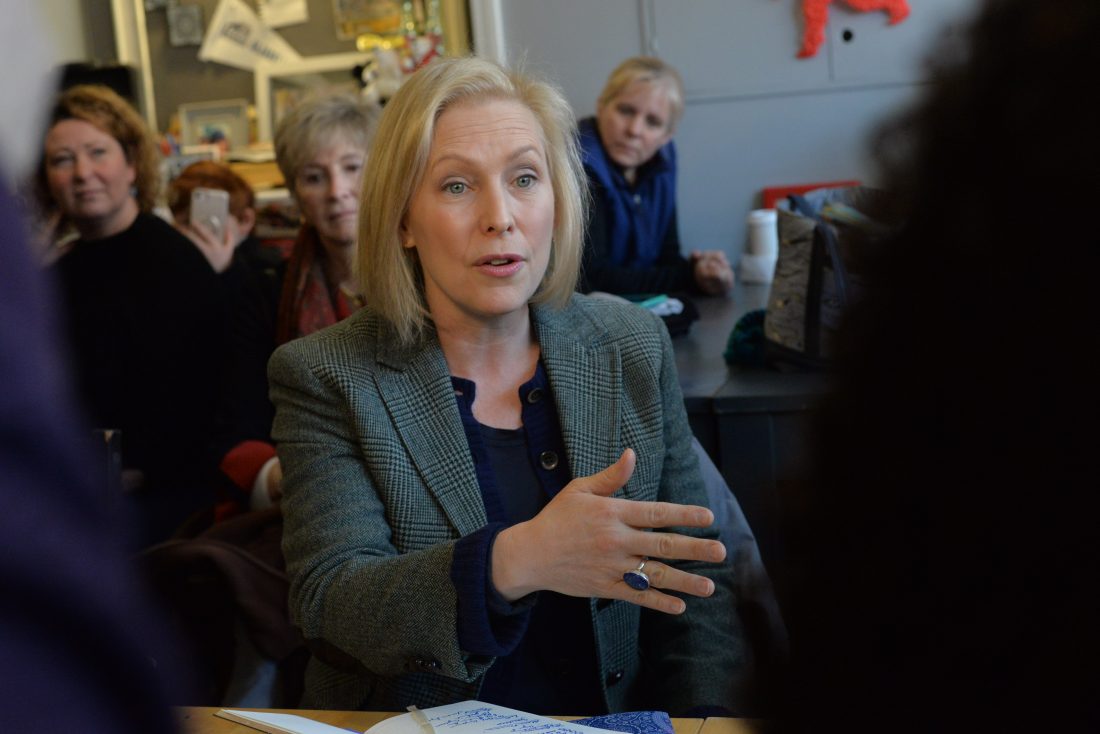 NASHUA, N.H. — U.S. Sen. Kirsten Gillibrand, D-N.Y., made her way across the Granite State Saturday, stopping in Nashua where she took questions from area voters over a cup of coffee at jajaBelle’s Pastry and Coffee Shop on Main Street.

The coffee shop was crammed with area elected officials, voters and members of the media, all hoping to get a word with the senator during her nearly hour-long stop in the city.

Gillibrand covered a range of topics during her time in the city, including immigration, education and protections for members of the LGBTQ community.

While some fear the possibility of another government shutdown in the coming weeks, Gillibrand made her views on immigration reform clear, citing that the United States was founded by immigrants. She said she believes in comprehensive immigration reform, and that America’s diversity always has been a strength. She also said officials in Washington, D.C., should recognize this strength, and that she wants to change what President Donald Trump is doing relative to immigration.

She said she thinks the hate that Trump has and continues to put forth is very destructive.

As it is, Nashua is one of the most diverse areas in New Hampshire, with 64 different languages spoken in the school system. Gillibrand said she will fight for every one of those voices.

Gillibrand voiced her views on how to better shape how the country’s youth see the world by making college more accessible to those looking to better themselves. She said she thinks college should be accessible to everyone, and that it should not be about whether one has enough money or can take out a large enough loan. While the student-loan industry continues to cripple people financially, she thinks the country should be able to lower student debt.

Gillibrand also spoke to another hot topic among the country’s younger populations — gun control — and she responded in passionate detail when Alderwoman-At-Large Shoshanna Kelly asked her about the controversial issue.

“I think the fact that Congress has done literally nothing in the last 12 years I’ve been in Congress shows how corrupt our government can be because of money,” Gillibrand said. “The reason why we don’t pass common-sense gun reform is because of the greed of the NRA, and let’s be very clear, the NRA is mostly funded by gun manufacturers, and when they fund the NRA, their goal is gun sales.”

She went into further detail and said the NRA does not care if the person purchasing a gun is on the terrorist watch list, or if it is a teenager who walks into a retailer to purchase an assault weapon or even if the person has a criminal record and is intent on committing violent crimes. She simply said, “They don’t care.” She said that is why they oppose universal background checks, banning bump stocks and any regulations on age.

Another hot topic that hits close to home for Gillibrand is LGBTQ protections, and making sure everyone is respected and protected. She said this is a personal issue for her, and vows to protect all the country’s youth who fall into that group.

“I think how this president dehumanizes our LGBTQ members, our transgender troops, our transgender kids, is so harmful,” Gillibrand said. “I am offended to the core, and it creates rage in me that does not subside, because I can just imagine if it were my own son.”

Other areas of interest for Gillibrand included reforming the bail system, making sure marijuana is decriminalized and holding pharmaceutical companies accountable, especially in light of the ongoing opioid crisis.

Gillibrand also made stops in Portsmouth and the New Hampshire Seacoast on Saturday.

The Telegraph of Nashua, New Hampshire is a sister paper of the Enterprise, and the Enterprise is picking up its coverage of presidential candidates from New York.

Elected to the U.S. House of Representatives in 2006 from a district in Upstate New York

A member of the U.S. Senate since January 2009, after being appointed to fill the seat vacated by Hillary Clinton