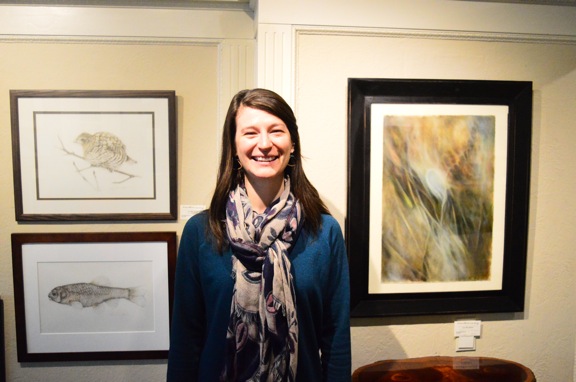 PAUL SMITHS — Paul Smith’s College has new programs students are enrolled in for the first time this year, slightly older programs growing their student base and plans to introduce new programs in the upcoming year.

Lee Ann Sporn, who is the coordinator of the Human Health and the Environment program which launched this fall, is excited to expand the program and prepare students to work at the crossroads of human and environmental health.

She said the program was created after all New York colleges received a letter from state environmental health directors saying there was a “dire need” for people trained in that field.

Environmental changes mean health changes, Sporn said, adding that as the planet becomes less healthy its inhabitants do, too. Today there are more outbreaks of infectious disease, increased cancer incidents, respiratory ailments, and threats to mental and physical wellness, she said.

“Often departments of health are staffed by people with medical training, which is super important, but we also need people there who are ecologists, who understand environmental change, the bigger picture,” Sporn said. “We know that these students are out there. We know that there are students that are passionate about the environment who don’t want necessarily traditional careers where they’re in an office setting.”

She said the program attracts students that enjoy biology and medicine and are more focused on human health than wildlife health.

The program will provide a bachelor’s of science degree and has five students enrolled in its first semester. Sporn said she would like to see the program increase to 35 or 40 students. She said she does not want to poach students from other fields, but said the Human Health and the Environment program could offer students, especially those in biological or medicine fields, a new career option that was not previously possible.

“Maybe they think that, ‘The only thing I can do with that degree is be a doctor, be a physician and treat individual patients,'” Sporn said. “You’re not really necessarily ever treating a patient, writing a prescription, doing surgery, but you’re looking at the entire population.”

This new program led the college to hire a new faculty member to cover a domain of life they were missing: microbes. Tess Eidem is a microbiologist who studied antibiotics for Staph infections and a molecular biologist who was previously working at University of Colorado, Boulder.

Eidem moved into town with her husband on Nov. 4 and will start working Dec. 1. She is excited to be part of a new program, especially since it gives her the chance to experiment with education. Eidem is energetic and engaged in the scientific world, reading research in her spare time and developing board games to better engage children with science.

Eidem said she left the University of Colorado because Paul Smith’s offered her the chance to work across several fields.

“I wanted to get out of those silos. If I were going to a big school they would come in expecting me to have my own line of research, not to connect with other people,” Eidem said. “I’m here to connect with people and to start building off the needs of the community, too.”

One of the ways she wants to get involved with the community is through her and her husband’s fermented foods company. They ferment everything from sauerkraut to kombucha, foods which contain microbes that then live in the gut and are important for the brain, immune system and general health.

Eidem said she would like to turn this into a college project and overlap with the culinary department, fermenting foods in the campus kitchen. The two are certified to ferment in Colorado but will need to earn a certification for New York.

She will also be doing program-specific recruiting, traveling with the college admissions team to high schools and open houses to talk to the kids in plain language about work in the scientific, environmental and health fields.

“Hopefully, if you get a scientist in their classroom they can start to make those connections between the job they want and the education they need to get there,” Eidem said.

Eidem said she wants to introduce high school kids who can’t know of all career choices to the Human Health and the Environment program. She said the program is ideal for students who don’t see themselves as scientists but want to be outdoors doing something for the environment.

Planting up the past

Ecological restoration, another bachelor’s of science degree Paul Smith’s offers, is in its fourth year and has become a thriving addition to the college program lineup, preparing students for work in this growing vocation.

“Ecological restoration can be described as the process of assisting the recovering of an ecosystem that has been degraded, damaged or destroyed,” program coordinator Craig Milewski said. “I would call it the real work of humanity, a healing and a harmonizing.”

“If environmental impact can negatively impact health, then restoring the environment can have a positive impact on human health,” Sporn said.

The program started with two students in its first semester and has grown to now have 25 students, eight of whom will graduate this year, the largest graduating class from the program so far. These graduates include the two who have been in the program all the way through their time at the college.

Some transferring students that have already graduated once interned with the federal Natural Resource Conservation Service doing wetland restoration around Watertown, New Hampshire and Pennsylvania, and the U.S. Fish and Wildlife service in Ohio with private landowners and have gone on to work with those organizations.

“These people will have permanent jobs when they get out. Its kind of remarkable,” Milewski said.

Milewski said the field of ecological restoration is an emerging one, pointing out that the state of Massachusetts recently established a Department of Ecological Restoration.

The practice has officially been around since the Society for Ecological Restoration was established in 1988, but the core ideas were around long before that in ecologists working in the Dust Bowl.

“Aldo Leopold probably planted the seed to ecological restoration in the ’30s and ’40s back in Wisconsin,” Milewski said of the well-known ecologist from the University of Wisconsin.

The field still focuses on the U.S. west, particularly the Midwest, which Milewski said needs restoration after years of farming and use.

“There’s not a whole lot to protect anymore, and in many places there’s more to restore than anything else,” Milewski said.

Ecological restoration is more than planting trees, he said. It includes hydrology, creating natural experiences, restoring human communities with nature and knowledge of many ecosystems.

“It’s very action oriented. It’s very hands on,” Milewski said, adding that it fits the “do something” attitude Paul Smiths students have.

One of the things these students are doing is working on what has been so far a four-year ecological restoration project right on campus.

Before the program was approved by the state, Milewski taught a capstone course called Integrated Natural Resource Management in 2014. He and his 32 students wanted a case study to work on site and settled on the shoreline where the campus meets Lower St. Regis Lake.

To top it off, the place is littered with Canada geese and their droppings for weeks during the semester. Over the years his classes have investigated the project, polling campus inhabitants for their aesthetic preferences for the shoreline, and studying all parts of the ecosystem: tree and vegetation species, wildlife use, shoreline structures importance for fish and invertebrates and wind velocity.

In all, 130 students have been involved in this experiential restoration over the years, hailing from all sorts of programs, and this year, capstone students finally crafted a restoration conservation plan. Now they have to build support for the project, which Milewski said is often the biggest part of the job.

Sporn also said that the college is exploring the possibility of expanding a minor in wildland firefighting that started this fall into a full program focused on general disaster management. This has yet to be pitched to the state, and Forestry Department Chair Brett McLeod is leading the exploratory committee.

The first graduates of the wildland firefighting minor will graduate in March, and students from the Ecological Restoration, Psychology and Human Health and the Environment programs will continue their paths to graduation.