From left, Congress candidates Elise Stefanik (R), Lynn Kahn (Green), and Tedra Cobb (D) attempt to speak over each other at a debate held by Spectrum News at its studio in Albany on Monday. (Photo — Jenn March, Special to the Post-Star)

Green Party candidate Lynn Kahn speaks at a debate held by Spectrum News at its studio in Albany on Monday. (Photo — Jenn March, Special to the Post-Star) 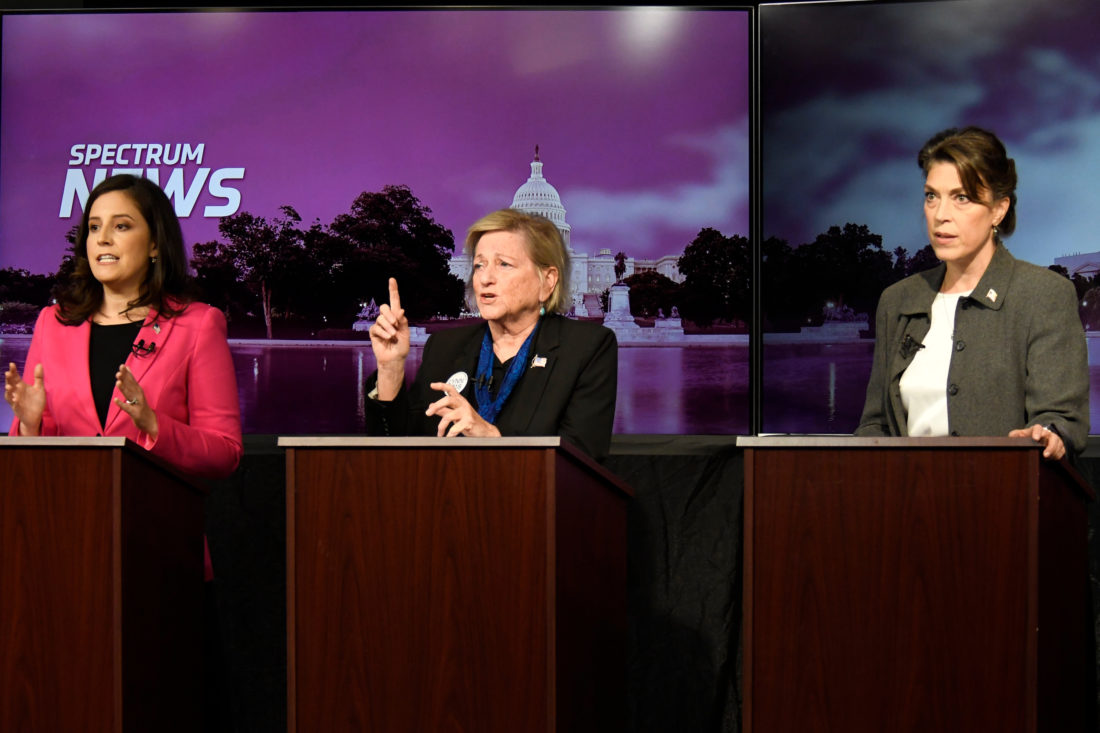 From left, Congress candidates Elise Stefanik (R), Lynn Kahn (Green), and Tedra Cobb (D) attempt to speak over each other at a debate held by Spectrum News at its studio in Albany on Monday. (Photo — Jenn March, Special to the Post-Star)

The first question came in response to gun violence, following a weekend when a gunman killed 11 people at a synagogue in Pittsburgh and, in recent years, other mass shootings across the country.

Stefanik said the entire North Country mourns the loss of life and said the rise in anti-Semitic hate crimes should be condemned by the leaders of all political parties. As for curbing gun violence, she said the nation needs to focus on improving mental health services and cited legislation to increase mental health funding by $150 million and strengthen the background check system.

Stefanik said she does not support an assault weapons ban because she respects the Second Amendment and represents tens of thousands of people who use those guns for hunting or sport. Congress also has provided funding for school resource officers, she said. 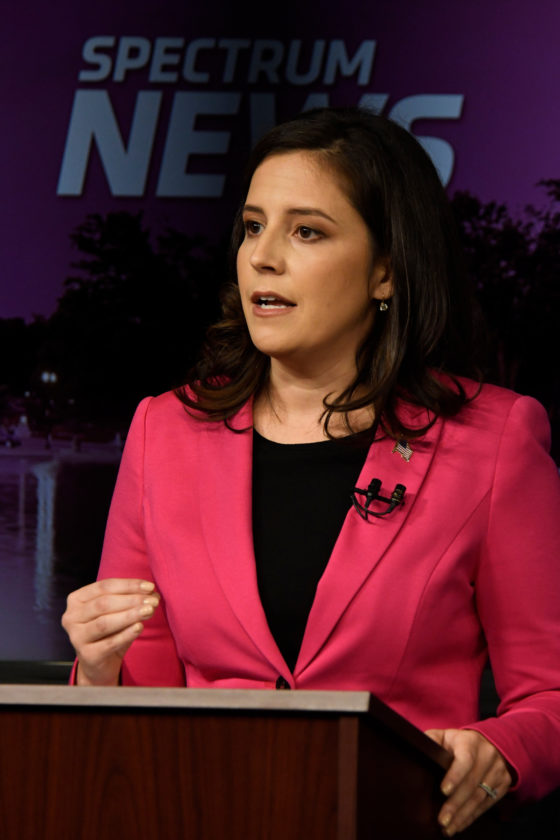 Kahn said the president should make an address to the nation from the Oval Office to “clearly state that he does not support political violence, and we as a nation should be more respectful of people we disagree with.”

Cobb faulted Congress for not implementing universal background checks, not banning bump stocks that allow rounds to be fired more quickly and not prohibiting people who have a history of mental health issues or committing crimes of domestic violence from having guns.

After Cobb had answered a subsequent follow-up question, Stefanik interjected and said that it is important for voters to know that Cobb supports an assault weapons ban, “which tens of thousands of gun owners in my district do not support.”

Cobb said the 1994 assault weapons ban did not solve the problem because the AR-15 rifle was subsequently developed, and she reiterated her support for background checks and tougher laws.

“We have to stop politicizing the issue. We can protect our Second Amendment while also protecting our communities,” she said. 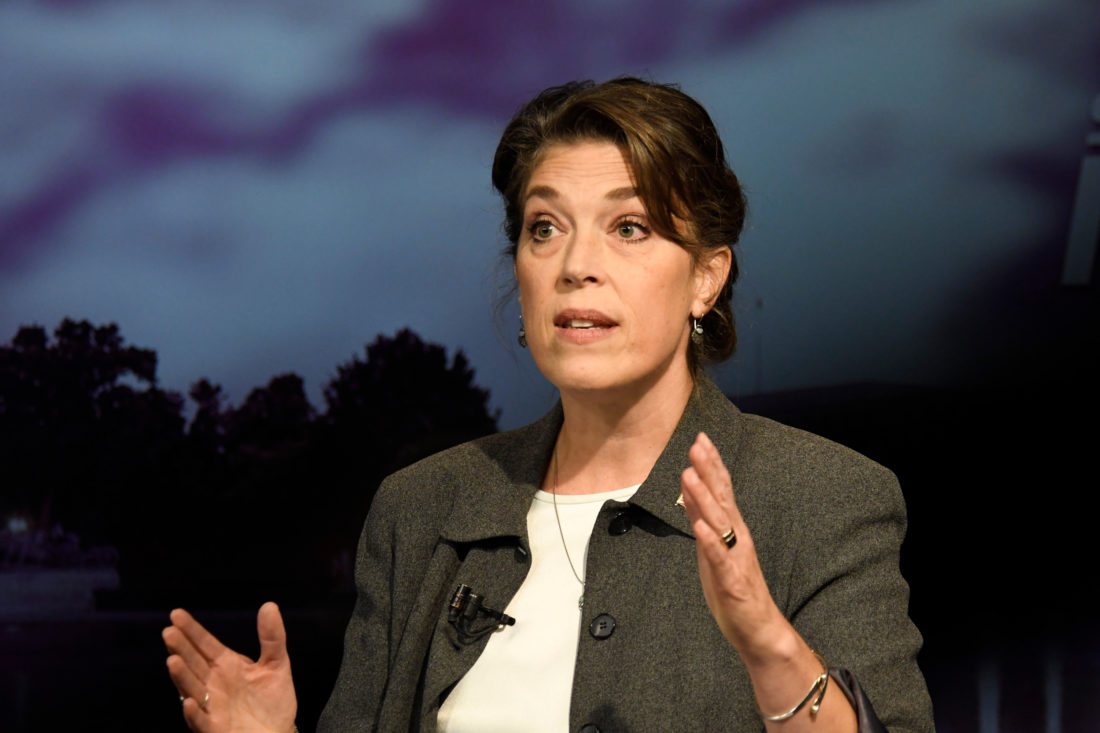 The gun discussion was the first of several instances where Stefanik went after Cobb and ignored Kahn.

In response to a question about the governor’s Excelsior Scholarship that covers tuition costs at New York’s public colleges and universities that other grants don’t cover, but requires students to stay in New York state after graduation, Stefanik said she believes that students should have the flexibility to go to college where they want, and she sought to tie Cobb to Gov. Andrew Cuomo.

“My opponent on the Democratic side has raised taxes multiple times and we’re seeing population loss from St. Lawrence County,” she said. 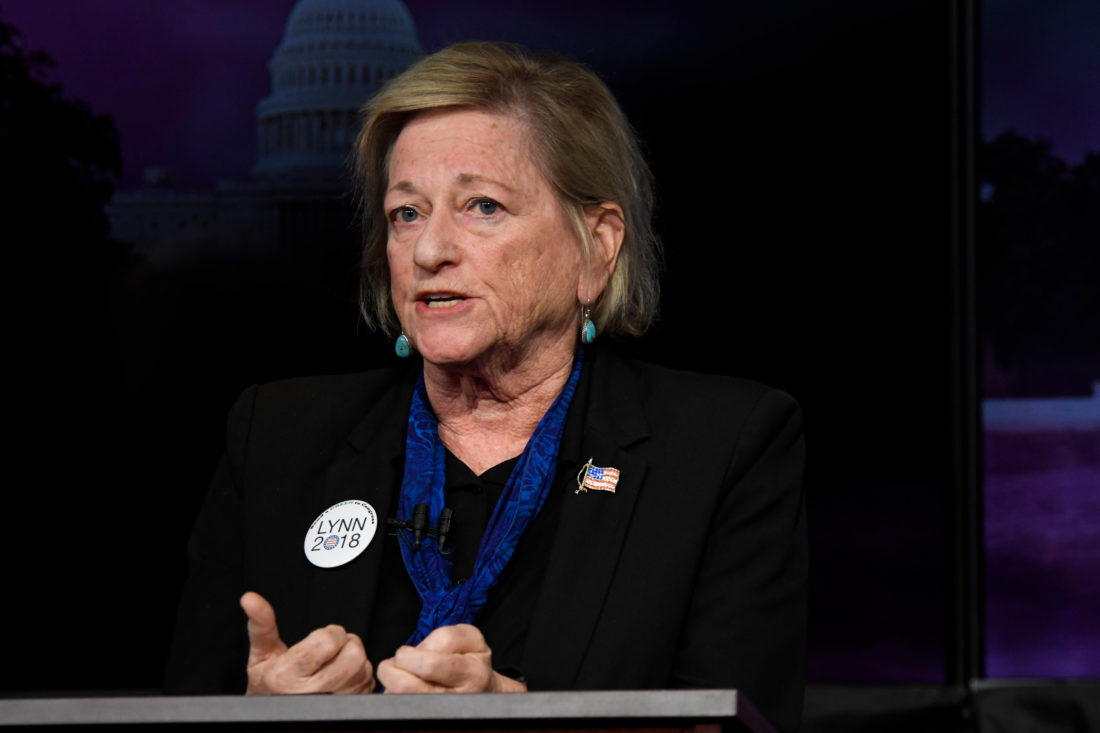 Green Party candidate Lynn Kahn speaks at a debate held by Spectrum News at its studio in Albany on Monday. (Photo — Jenn March, Special to the Post-Star)

“There you go again,” Cobb replied, echoing Ronald Reagan’s response to a line of attack by then-President Jimmy Carter in a 1980 presidential debate.

Cobb said some of those tax increases were necessary.

“When the federal government cuts and the state cuts, the local taxpayers end up paying,” she said.

Kahn said the spat is similar to Republicans and Democrats going after each other and not looking out for the people and the pockets of poverty and poor infrastructure in the North Country.

“It’s the same two parties. It’s the same bad results. What are the results? That’s the question that voters need to ask,” she said.

On health care, the candidates stuck to their previous positions: Stefanik is opposed to government-run health care and cited her legislation to suspend the medical device tax and repeal the mandate that required businesses of a certain size to automatically enroll employees into a health care plan. She supports allowing people to purchase insurance across state lines.

“We need to give patients the ability to purchase health care that works for them,” she said.

Kahn said she supports the Medicare for All bill with some suggested amendments. She supports allowing the federal government to step in and take back patents if prescription drugs are not being made available at a more reasonable price — because taxpayer funds pay for much of this research.

Cobb said she is open to options that provide portable and affordable health care and believes the country should hold hearings on the issue.

Stefanik seized on that line to attack Cobb.

“We’ve had over a hundred hearings. Once again, she’s uneducated as to what’s actually happening in Congress,” she said.

A subsequent question about how to pay for Medicare for All opened up another line of questioning about military spending.

Kahn has railed against $125 billion in waste in the Department of Defense and $140 billion worth of fraud in Medicare.

Stefanik criticized her opponents for saying they would cut military spending, citing the sequestration cutbacks to Fort Drum near Watertown.

“That gutted Fort Drum. That gutted military readiness,” she said. “I do not support balancing the budget on the backs of our soldiers.”

She also said she supported President Donald Trump’s proposal for another branch of the military called the Space Force, while Kahn and Cobb thought those functions could be rolled into an existing agency.

Stefanik said the country should look to find savings in other areas of the federal budget.

Cobb said the federal government is doing a disservice to veterans.

“There are 40,000 open jobs at the VA,” she said, referring to the Department of Veterans Affairs. “If we had a commitment to our veterans, we would fill those jobs.”

Cobb said social programs would be endangered under Stefanik.

“This Congress gave a $1.5 trillion tax cut to the richest among us and talks about cutting Social Security and Medicare,” she said.

Stefanik said it was a good deal.

“My Democratic opponent doesn’t support our trade agreement with Canada. It’s pretty clear she would vote ‘no’ on this updated and strengthened NAFTA,” she said.

Kahn said the trade agreement does not address the fact that dairy farmers are losing money.

“It doesn’t deal with the basic problem that the federal formula for milk prices is below what it costs to produce that milk,” she said.

The three candidates also disagreed on approaches to immigration.

Stefanik did not respond directly to a question about whether the Immigration and Customs Enforcement agency should pursue people seeking asylum in Canada, stating that she supports increased security on the southern border and an agricultural visa program.

“ICE should be given the tools they need to make sure we are nation that lives by the rule of law,” she said.

Kahn said the United States is a nation of immigrants and ICE should not be going after people with no criminal record who are simply seeking asylum.

“It is not illegal to seek asylum. It’s constitutional and it’s international law and we, at a minimum, need to hear what people are escaping from,” she said.

Cobb said that Congress should pass a bill that gives the people who arrived in the U.S. as children a path to citizenship, and pointed out that many of them are at Fort Drum. In addition, Congress needs to expand guest worker visas and noted that her daughter had surgery performed by a Chinese doctor living in America.

“People come here and serve in this country admirably and pay taxes. We need to make sure our policies treat people fairly,” she said.

Despite the district being located in the Adirondacks, environmental issues did not come up in the debate, except in a lightning-round question. Stefanik said she has climbed two High Peaks, while Kahn and Cobb have not climbed any, though Cobb said she has done a lot of Zumba.

When asked to name minimum-wage jobs where they have worked, Stefanik said Old Navy, and Kahn said she was a babysitter. Cobb also did babysitting as well as working as a groundskeeper, cocktail waitress and newspaper carrier.

In response to whether Andrew Cuomo has been a good governor, Stefanik and Kahn said no and Cobb said sometimes but not when it came to school aid.

On President Trump, Stefanik said he has done a good job. Cobb said he has not, and Kahn said “not enough.”

All three candidates will hold their third and final debate Tuesday at WWNY-TV in Watertown.