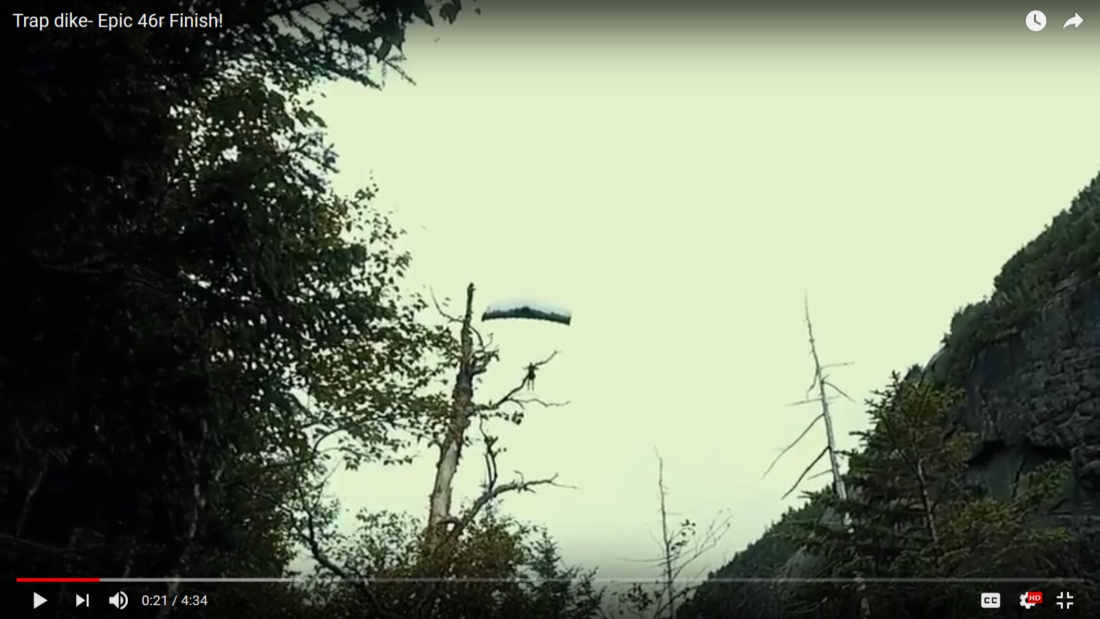 This screenshot of a YouTube video shows a speedflyer over Avalanche Pass in the High Peaks Wilderness on Saturday. (Screenshot from YouTube)

LAKE PLACID – The skies over the High Peaks can be filled with eagles, hawks and sundry other birds, and – frequently – the State Police helicopter. But this past Saturday the sky over Avalanche Pass was home to a new species: the speedflyer.

The state Department of Environmental Conservation’s Lake Colden caretaker reported that at 8:40 a.m. on Sept. 15, they saw an unidentified individual “parachute” down from the summit of the 11th highest mountain in the state, and witnesses – and two online videos – confirmed the first known launch of its kind in the High Peaks.

Although the DEC did not identify the individual, a Canadian man named Maks Mastalesz (who spells his name Max Mastalerz online) posted a video of the jump from a camera that is mounted on his helmet. In the video, Mastalesz falls near the summit of the 4,714-foot mountain, and a note in the video says his camera was damaged in the aborted attempt. (Editor’s note: Mastalesz later said the camera damage was negligible.) The video then shows a second, successful attempt, after which he lands in the waters of Avalanche Lake. He then tells someone off screen that he had jumped from the top of the Trap Dike.

Mastalesz, in an email, said he was caught a bit off guard when he realized it would be a wet landing.

“I found this mountain by scanning through Google terrain view and a list of the top summits in the Adirondacks. On Google maps it appeared that there was a dry landing area but some rains raised the lake level and covered up everything,” Mastalesz wrote. “Mount Colden is one of the few mountains in the Adirondacks that has significant terrain drop. The mountain is clear of trees for the most part which makes a terrific launching spot as you can launch without having to worry about clearing any ugly terrain.

“I was just really happy I didn’t have to walk down.”

Mastalesz, a 21-year-old from Ontario (“One of the flattest provinces in the country, and therefore a horrible place to practice the sport of speedflying”) said the difference between speedflying and parachuting is significant.

“BASE Jumping is a sport where people jump off certain objects and deploy a parachute to stop their fall,” he wrote. “The thrill for base jumpers is the jumping aspect. For spee[d]flyers, the thrill comes from the flying. Parachutes are devices to stop a fall while speedwings are not designed to do such a thing.”

Although Mastalesz had to stop his first attempt, he said the second was incredible.

“The steepness of the terrain allows you to gain speed fast and allows you to stay clear of the terrain to mitigate any unnecessary risks. Since I am not the best pilot, I know I have to fly within my limits,” he said. “I had to wait a while on the summit for weather conditions to clear up for a safe launch to be possible. I waited for around an hour before the winds where coming up the slope and made for suitable flying conditions.

“This is actually the first real launch accident I’ve ever had (Out of 100-plus flights). Every time I fly I make sure to do the proper checks but somehow, something went wrong. Looking back on the video I’m still not able to tell exactly why I wasn’t able to get the wing overhead.”

Mastalesz said he was aware of the dangers of his actions, and warned others that following in his footsteps requires a lot of skill and practice.

“I’d like to note that all adventure sports require proper training and equipment for the participants to remain safe,” he said. “This is not a sport you can learn safely thru solo instruction. You must seek out professional expertise and respect the progression in the sport.

“There are risks in everything we do in life. It’s up to us to determine how much risk we find acceptable.”

The DEC did not have a direct interaction with Mastalesz but warned that — while legal — this was a dangerous endeavor.

“While there is no regulation prohibiting this activity, DEC strongly discourages others from repeating this activity due to the extreme danger involved,” DEC spokesman David Winchell wrote in an email.