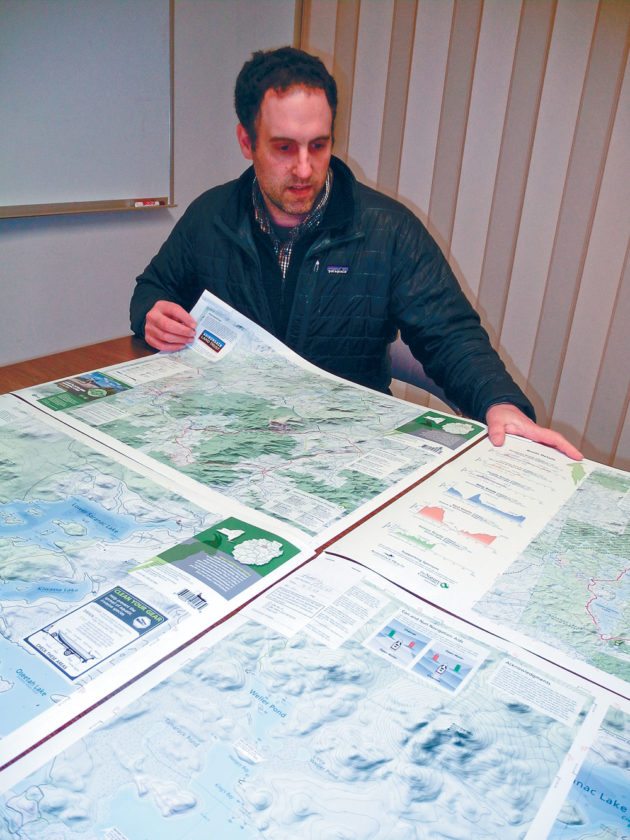 Local cartographer Ezra Schwartzberg shows his two latest maps in his Green Goat line: one for motorboating and fishing, and the other for road biking. (Enterprise photo — Peter Crowley)

SARANAC LAKE — It isn’t very often that a new cartographer comes on the scene in the Adirondacks, and it’s perhaps unique that such a cartographer is also a scientist, making and selling maps on the side.

Ezra Schwartzberg, who grew up in Saranac Lake and now lives in Gabriels with his wife and children, launched his Green Goat Maps line this winter with one for local cross-country skiing, snowshoeing and fat biking. One side of the hardy, waterproof chart showed trails in the Saranac Lake area, and the other showed them in and around Lake Placid.

It’s a handy item, not only to avoid getting lost but also to choose a place to go. The Tri-Lakes area has many trails, yet a person who suddenly has an afternoon free for a ski can’t always call to mind the available options.

Now, in time for the summer season, Schwartzberg is releasing two new maps for specific local activities: one for motorboating and fishing, and the other for road biking.

Again, these are printed on tough, glossy, waterproof paper, and they fold down to pocket size. Again, Kelly Hofschneider of Saranac Lake worked with him on the graphic design.

Also, again, they are full of tailored details. The boating-fishing map points out water depths, campsites, aquatic plant beds, boat-washing stations and even buoys. The cycling map suggests various loops, with distances and elevation change graphs. One quickly realizes how much steeper the rides are in the Lake Placid-Keene-Jay-Wilmington area than around Saranac Lake, Lake Clear, Paul Smiths and Rainbow Lake.

The cycling map focuses on view sheds. It points out where one may want to stop and soak in the scenery, and in a partnership with the Adirondack Land Trust, it notes how land trusts buy and maintain property to keep that scenery scenic.

The boating-fishing one focuses on limiting invasive species, in partnership with the Adirondack Park Invasive Plant Program. In addition to showing where weed beds and boat-washing stations are, in its margins the map indicates which plants are invasive and how to clean boats to prevent their spread.

“I think a typical mapmaker wouldn’t be working with The Nature Conservancy and APIPP to put invasive species on the map,” he said.

Schwartzberg’s other professional gig is with Adirondack Research, his firm based in a Saranac Lake office. His scientific work often centers around insects — and GIS maps. For instance, he has an upcoming contract job with the U.S. Department of Agriculture, with NASA satellites, to map hemlock stands in an effort to monitor the spread of hemlock wooly adelgid, an aphid-like bug that is wiping out the trees.

Meanwhile, “I noticed a need for a cross-country winter map for my own family,” he told this newspaper in January. He decided to put his GIS talent and local outdoor recreation interests to work.

“It complements the research that I do,” he said.

He says he put extra work into making sure his maps are accurate, including checking old maps in the Saranac Lake Free Library archives. Those helped him correct shorelines and islands that hadn’t been right on some other commercial maps.

Now Schwartzberg is in growth mode. So far his maps are only of the Tri-Lakes area close to home, but he plans to expand into other parts of the Adirondacks and other recreational specialties soon.

“This is kind of the testing ground,” he said. “I hope to have maybe 20 maps in the next few years.”

Each Green Goat Map costs $11.95 plus tax and is available online as well as in 16 Adirondack stores, although Schwartzberg expects to have them in about 25 stores soon. From 1 to 3 p.m. Saturday he will be at a release event and map signing — like a book signing — at the Bookstore Plus in downtown Lake Placid, which is celebrating Independent Bookstore Day.