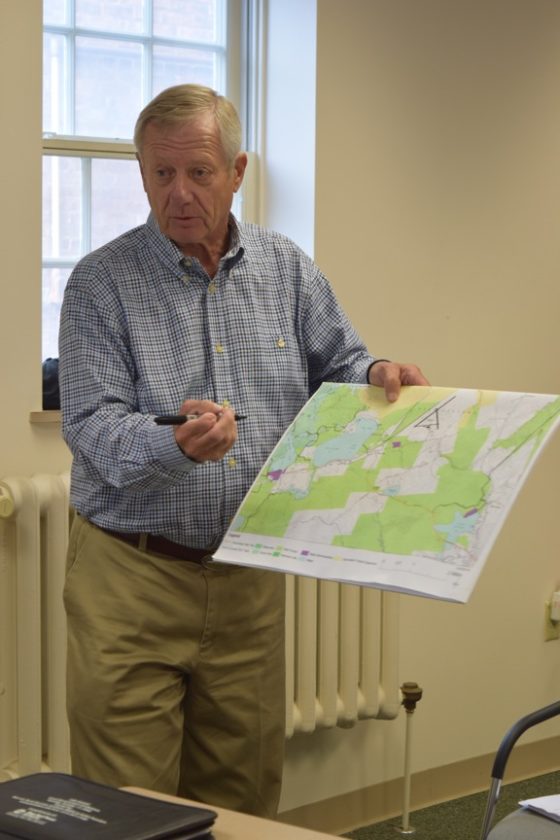 The group, which is made up of Lake Clear homeowners, is also worried about potential impacts from the state’s proposed recreational trail along the Adirondack railroad corridor.

“We don’t want any more public access to the lake, and I think we have some pretty good reasons for that,” association President Peter Lanahan said during a Thursday presentation to the Harrietstown Town Council.

There are currently four main public access points to Lake Clear: at the Lake Clear Beach, off of Forest Home Road at Lake Clear Outlet, at a bridge on state Route 30, and from a trail near Charlie’s Inn. Lanahan said the current access suits the demand, and the lack of any additional access has helped protect the lake from invasive species.

“There seems to be a good balance right now between the demand and the need to protect the lake by limiting access, and our point of view would be to continue that before we get into new proposals that we don’t know the effect of,” Lanahan said.

The UMP, which was released in June after more than a decade of work, outlines a series of access upgrades to Lake Clear. It calls for improving car-top boat access at the Lake Clear beach; creating a new fishing access site where Forest Home Road meets Lake Clear Outlet; building a new canoe carry trail from Conley Road to Lake Clear; and creating an interpretive trail system on the east side of the lake.

Among other proposals, a new campsite would be built on St. Germain Pond, just north of Lake Clear near a Girl Scout camp. The UMP also calls for reopening a historic canoe carry between Upper St. Regis Lake and Lake Clear. If DEC can get permission to cross private property, a canoe launch would be created on the shore of Lake Clear.

Lanahan said the association’s biggest concern is about the potential for aquatic invasive species to be introduced to the lake through the access improvements. He cited a Cornell University study that found Lake Clear is ranked ninth among 120 Adirondack lakes for their potential to be harmed by invasives, based on its proximity to other, already infested lakes and other factors. He also raised concerns about the loss of property value for homeowners on invasive-infested lakes, citing a study by the Adirondack Park Invasive Plant Program.

“At some point, the rail trail is or is not going to happen,” Lanahan added. “It presents a lot of management issues if it does occur — not only the access but the parking, the risk of invasive species with people bringing in boats over the rail trail possibly.

“Our point is, we’re going a little too fast here. Let’s take the resources we have and make certain the rail trail is known and understood, and get some management experience there, and don’t undertake these other proposals in isolation from that.”

Denise Williams of the Girl Scouts’ Lake Clear Camp said she’s concerned about the safety of her campers with the proposals for additional access.

“Right now we’re sort of in our own little secluded area,” she said. “As that bike trail gets added in and that camping area gets added in, now I have more people that are backed up right against where my girls are. We also have a sailing program on the lake, and we’re looking to put back a scuba program. We also do a ‘Seahorse Swim’ that goes to the beach and back. Without a horsepower (limit) and some natural barriers, we’re going to have to eliminate those as we start to add access. It’s dangerous to our girls.”

“We’re not saying we don’t share the lake with the public,” Lanahan said. “We’re just saying we have to manage the risks.”

The Upper Saranac Foundation is also backing the Lake Clear Association’s stance on the UMP and has similar concerns, according to the foundation’s lake manager, Guy Middleton. He noted that Lake Clear is a tributary of Upper Saranac Lake, which has invasive species problems of its own.

“The unit management plan, as written, not only increases use on Lake Clear but also does similar to Upper Saranac Lake, almost doubling the number of campsites and increasing access at numerous fishing access sites,” Middleton said. “We have very similar concerns.”

Town Councilman Ron Keough said he’s concerned with DEC creating new public access points when it doesn’t have enough funding and personnel to manage what it has now.

“I have a problem with them opening up more,” he said.

Supervisor Mike Kilroy said the town supports the effort to protect Lake Clear from invasive species. The board will likely take up a formal resolution supporting the association’s stance at a future meeting, he said.

Friday was the last day DEC took written comments on the proposed UMP. It held a series of public meetings on the plan last month.