LAKE PLACID – The village board passed a resolution Monday to improve the stormwater drainage system that dumps directly into Mirror Lake.

The $743,652 project is intended to replace what Trustee Peter Holderied described as “collapsing” stormwater drains on the southeast shore of Mirror Lake, and the improvements will protect Mirror Lake, which village Mayor Craig Randall says is the “crown jewel of the village,” from salt and sand.

The project, awarded to Kubricky Construction, will replace the existing stormwater drains along that southeastern shore of the lake, approximately from the Lake Placid Club boathouse to around the Hampton Inn, with a system that will divert the runoff toward a holding pond on the Lake Placid Club’s golf course property.

All of the village’s watershed goes into the Chubb River and from there into the West Branch of the AuSable River.

The system the village plans to install on Main Street has a bio-retention system that will process stormwater, most of it dispersing through the ground. Excess stormwater will go through the new 30-inch tube to the holding pond, away from Mirror Lake. The tube will start at the rear corner of the post office on Parkside Drive, picking up all of the stormwater from the area of the village south and east of Marcy Road, including the municipal parking lot and Olympic hill, Holderied said.

“It’s an effort to take a tremendous amount of stormwater that today is running on the surface and just running, divert it from Mirror Lake and get it to the watershed where it has a better opportunity to disperse,” Randall said this morning.

The piece that allows the village to connect the Mirror Lake stormwater and the holding pond is a strip from the Hampton Inn at the southeast corner of the lake through the woods to Morningside Drive, Randall said.

“As luck would have it, the elevation of that Hampton (Inn stormwater) line was just about perfect for this piece to be added to it,” Randall said at Monday’s meeting.

The watershed information Randall spoke of stems from a winter stormwater sampling report by the AuSable River Association that was presented to the village board two months ago. The association found higher concentrations of salt than anticipated in the stormwater drains on the southeast portion of the lake. More than a dozen of the locations the association tested were along the southeast shore, the association’s science and stewardship director Brendan Wiltse said.

“We do think that when you combine all of those together, that there is a good bit of flow coming out of those 14 (stormwater drains) along that (southeast) side,” Wiltse said on July 19. “Diverting that from the lake is going to be huge for seeing the chloride concentration starting to go down rather than up.”

Wiltse said Mirror Lake has one of the highest chloride concentrations for a lake tested in the Adirondack Park, consistently in the 95th to 97th percentile.

Mirror Lake Watershed Association President Bill Billerman attended Monday’s meeting to speak about the Songs at Mirror Lake Music Series, but he stayed for the stormwater resolution and, after overlooking the plans, expressed approval.

“It’s a huge step,” Billerman said. “It’s a great step to get all of this on the east side away from the lake and to have whatever is coming from Marcy Road down treated, and the overflow going into the end of the Chubb.”

Randall said the project will also include a revised entrance to the village Beach House in what the village hopes will soon be announced as a community center facility. The work around the Beach House will include 10 additional parking spaces off of Parkside Drive, with an emphasis on handicapped spaces. He said the entrance to the beach house will include a ramp to make the facility further accessible for all people.

Randall said the work will begin this fall. Randall said the village will use a $75,000 award intended for the southeast side of Mirror Lake from the state Department of Environmental Conservation on the project. He said further funding will come from a bond that will have to pass several resolutions. 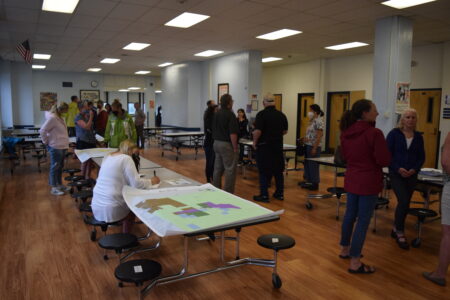 Conversation on racism, civil rights in South on Wednesday

SARANAC LAKE — The public is invited to the second in a series of Conversations at Lake Flower Landing on ...