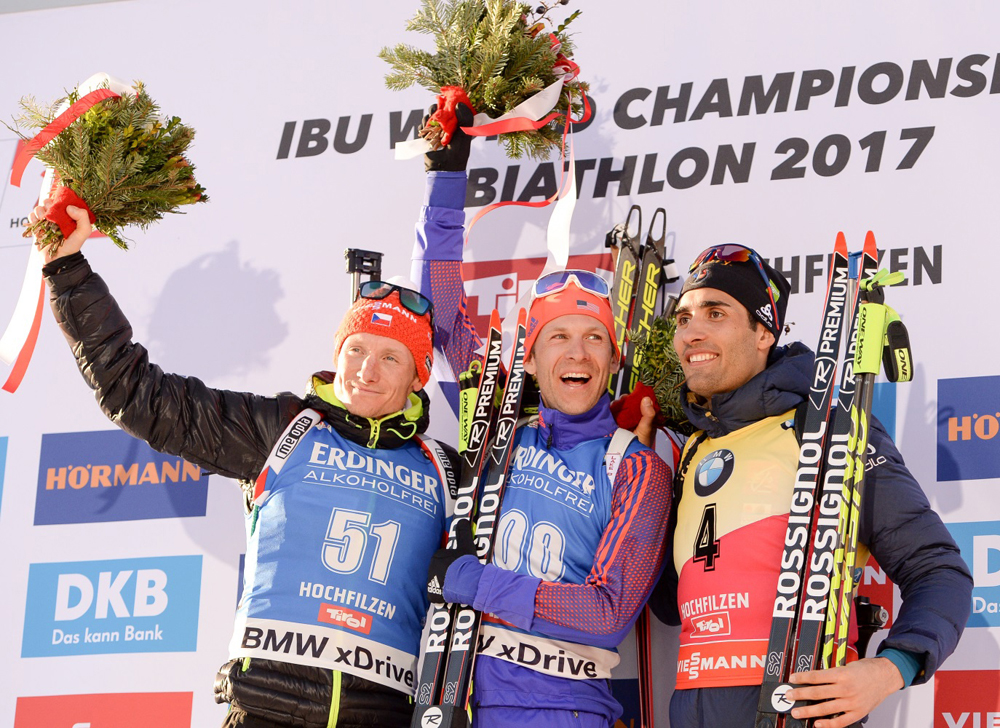 Lowell Bailey stands on the top of the podium between France’s Martin Fourcade, right, and Ondrej Moravec of Czech Republic after Bailey won the gold medal in the 20-kilometer individual race at the 2017 world championships in Hochfilzen, Austria. (Provided photo —NordicFocus)

The leader of the U.S. biathlon program sat down for a recent dinner at a bar in Park City, Utah, when he happened to glance at the television.

There, on the screen, was a biathlon competition. On TV. In a bar. In the U.S.

One day soon, Cobb envisions something even greater: The U.S. leading the charge in a sport that combines cross-country skiing and rifle shooting.

To achieve that, Cobb, who’s been with the program since 1989, and his staff initiated a blueprint aimed at capturing the country’s first Olympic biathlon medal. The model includes bringing in coaches from Europe, contracting with a machine shop to enhance glide performance on skis and partnering with a university professor to analyze shooting mechanics. 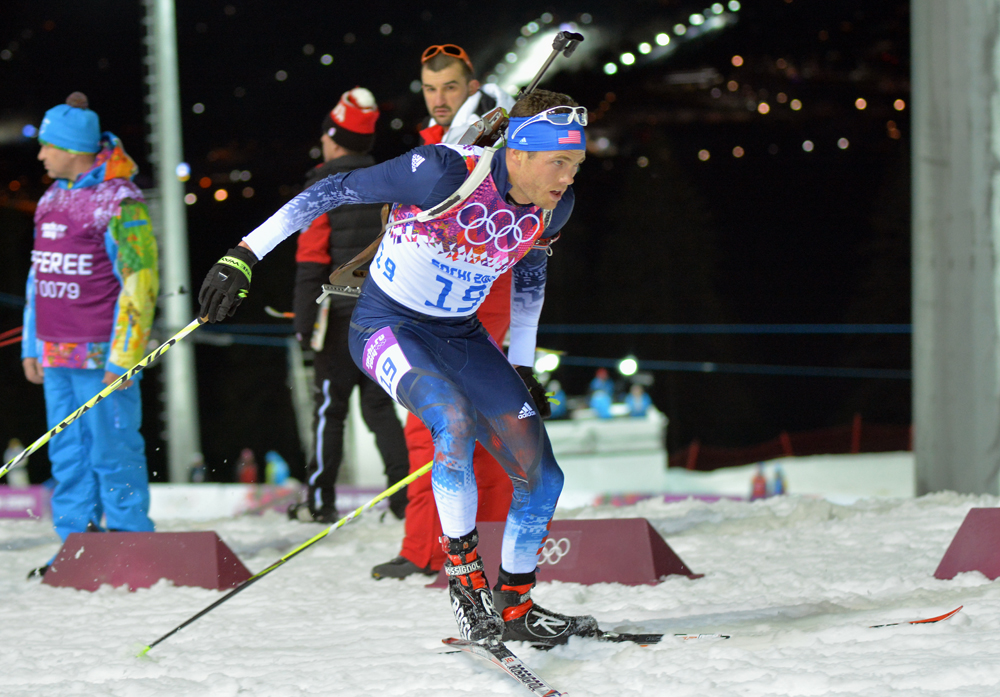 Four-time Olympian Tim Burke, a Paul Smiths native who is now the athlete development manager for the US Biathlon team, competes in the Sochi Winter Olympic Games in 2014. (Enterprise file photo)

“I believe the day an American wins its first Olympic medal in the biathlon, is the day our country discovers the drama and beauty of the biathlon,” said Cobb, whose squad will compete at the world championships this week in Sweden. “It will be a beautiful moment.”

In a sport long dominated by nations such as Norway, Germany and Russia, the Americans remain an “economic underdog,” Cobb said, with an annual budget of about $2.6 million. That’s fractions of what their counterparts spend.

So they need creative ways to close the gap.

Like working with a machine shop technician in Austria, who’s experimenting with different sharpening blades to make unique grooves in the base of the skis. The goal is to reduce surface friction for better glide. So far, they’ve tried out 150 different metal blades.

Anything to help the athletes glide faster while skiing.

In addition, they’ve been working with Gerold Sattlecker from the University of Salzburg to analyze shooting mechanics. They’ve developed a remote trigger pressure sensor that allows them to see how much pressure an athlete is putting on the trigger.

Anything to help them shoot straighter at the targets under pressure.

“One of those things that I see as a competitive advantage for us is, we innovate and collaborate better than our competitors,” Cobb said. “The fact we know we’re being outspent and have this clear goal of trying to achieve America’s first Olympic biathlon medal, those are really unifying goals that keep us all focused.”

The organization began to revamp the business model in early 2016. It was a way to spring forward after a 2014 Sochi Games in which Susan Dunklee came within one missed shot of capturing an elusive medal. The team had breakout performances at the 2017 world championships, with Lowell Bailey, of Lake Placid, earning gold in the 20-kilometer individual race and Dunklee taking silver in the women’s mass start.

It was proof that things were trending in the right direction. Then, at the Winter Olympics in Pyeongchang, South Korea last winter, something that couldn’t be predicted — sickness. Dunklee got the flu that week. Bailey, who’s now retired, fought an illness leading into the Olympics.

Soon after Pyeongchang, some big biathlon names were brought in to lead the team into the 2022 Winter Olympics in Beijing:

¯ Armin Auchentaller, who’s in his second go-around with the squad as he takes over the women’s squad after leading the Swiss team.

¯ Michael Greis of Germany, who’s overlooking the men’s side following a career that saw him capture three gold medals at the 2006 Turin Games.

“You have to be unafraid to change things, even when you’re going along pretty well,” Cobb said. “Sometimes, you need a new stimulation, to look at different ways of doing things.”

To boost the team’s profile, they’ve hired a marketing firm based in Austria. They’ve added sponsors in Europe (Maloja, a small German clothing brand) and in the U.S. (Ariens, a Wisconsin-based company that manufactures lawn mowers and snow blowers and is expanding into Europe).

Europe is simply where the dollars are and the viewers reside.

“If you were to go to Germany and you turn on the television in prime time you’d see biathlon and you’d have 5 million people or so tuning in to watch. It’s like turning on the TV in the states and seeing NFL on ESPN,” the 33-year-old Dunklee said. “It’s the most popular winter sport there. But you go to the states and you tell someone on the street, ‘Oh, I do the biathlon,’ and they’re like, ‘Is that swimming and running?’ I’m like, ‘Not quite.’ We don’t have much of a following over here.”

Steadily, that’s changing. This season, there will be about 85 hours of original content on NBC’s stable of networks, which is how Cobb was able to watch a World Cup biathlon race in a bar in Utah.

And last month, a biathlon World Cup event was staged on home snow for the first time in three years. The site was Soldier Hollow, where the biathlon events were contested at the 2002 Salt Lake City Games. Food trucks were brought in — along with a petting zoo and mechanical bull — to create a festival-style atmosphere.

They all do their part, even filling multiple roles. Take Bernd Eisenbichler, one of the program’s visionaries who has gone from wax technician, to high performance director, to chief of sport over the last two decades. He still helps out with making sure the skis are finely tuned.

“Everybody is looking themselves in the mirror and asking, ‘Is there anything else I can do to help the team?'” Cobb said. “When you have that kind of buy-in, it’s inspiring to everybody.”

Shiffrin skis to first win of 2020

Freestyle skier Gus Kenworthy hasn’t had much time to rehearse and practice new tricks heading into the Winter X ...

ANAHEIM, Calif. — The NCAA will now permit elite athletes to be paid for training expenses by the U.S. Olympic ...

LILLEHAMMER, Norway — Two-time Olympian Summer Britcher showed that the Hunderfossen track in Lillehammer is her ...