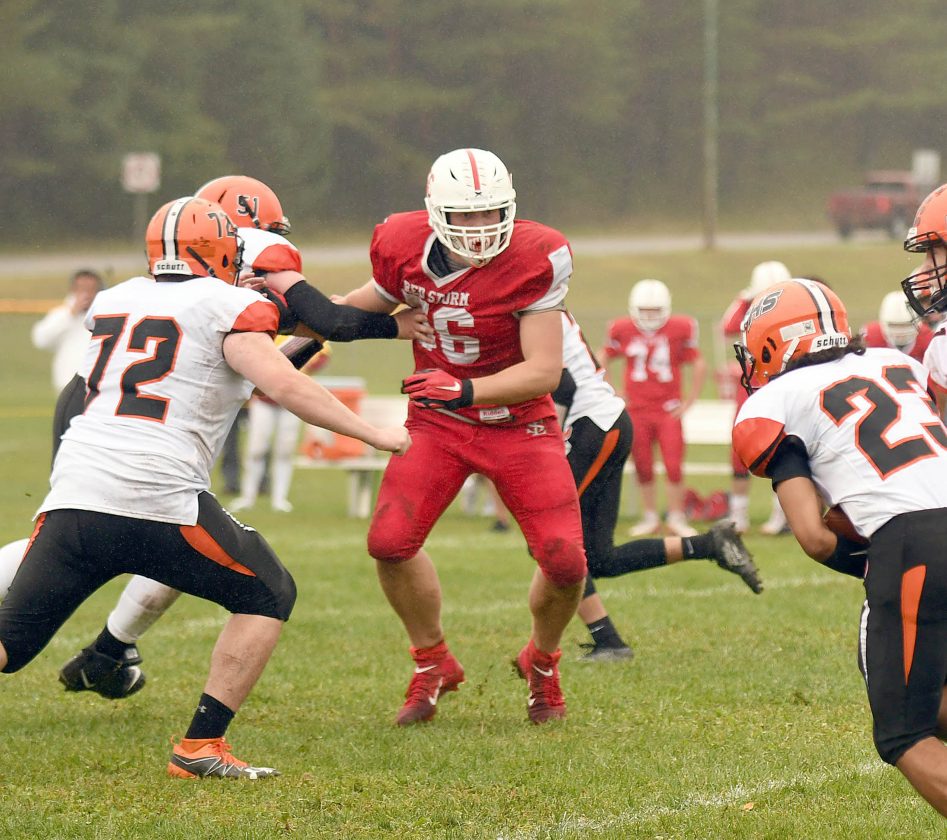 SARANAC LAKE — Patrick Alberga has an exciting future ahead of him and a chance many can only dream of.

Alberga, a senior at Saranac Lake, will be playing football for Syracuse this coming fall as a preferred walk-on.

Alberga’s preferred walk-on status means he has a guaranteed spot on the roster, which the 6-4, 250-pounder plans to take full advantage of and is extremely excited for.

“When I found out I had a spot, it was crazy,” Alberga said. “I did not really know what to do with myself. The amount of excitement was pretty high.”

Last November, Alberga had a visit planned to check out Syracuse’s civil engineering program, and before his trip down, he emailed coaches of the Division I football program and expressed his interest in playing for the Orange.

Shortly after, Roy Wittke, Syracuse’s director of player development, and other personnel reached out to Alberga and said they wanted to meet when he came down for his visit.

“I sent them an email expressing that I would love to play for their program, and I sent them some game tape,” Alberga said. “I was so excited when they reached back out to me.”

At his visit, Alberga checked out the university’s civil engineering program in the morning and met with football coaches in the afternoon for tours.

By the end of the day, Alberga had spent more than three hours in various meetings and tours with Syracuse football personnel.

“It kind of felt unreal just thinking about the visit at the end of the day,” Alberga said.

“It was an experience I had never been through before. They showed so much interest, and I thought I was just going to walk in there, talk for a bit and leave. It was a lot more than that.”

Alberga was accepted to Syracuse in January and received confirmation of his preferred walk-on status in March.

When he got the official word, Alberga was actually on a road trip with his family to California to see his brother compete in junior nationals for Nordic skiing.

“When they called me, I did not actually know what preferred walk-on meant, so I went on Google and searched it,” Alberga said. “When I found out I had a spot on the team, that moment was unbelievable.”

Since his acceptance to the college and notification of his spot on the Orange, Alberga has received weekly training programs from Syracuse.

He has not had the opportunity to go back to Syracuse for follow-up meetings due to the ongoing COVID-19 pandemic, so he is completing the programs and doing what he can for the time being to stay ready.

Alberga played defensive end and was on the offensive line during his time with the Red Storm and received many All-Star accolades for his play.

In his meeting with Wittke, he was given a great option and opportunity.

“It was kind of cool in the meeting with him because Coach Wittke basically said, ‘Don’t tell me that you will play any position we tell you to play. Tell me what position you want to play,'” Alberga said. “I told them I wanted to play defensive end.”

Countless times with the Red Storm, Alberga wreaked havoc on opposing offenses and made his mark on North Country football and the Saranac Lake program.

“I could not be happier for him,” Red Storm coach Eric Bennett said.

“If you talk about a kid who is married to the weight room, extremely conscious of what he puts in his body and showcases a ridiculous work ethic, that is Patrick. He has all the attributes you want to see and is ready to play at the highest level possible.”

Bennett said he recently watched game film with Alberga on it and noted after watching that his former standout player made plays left and right and contributed in a number of ways.

“When teams tried to get the edge on him when he was playing defensive end, he always controlled the narrative,” Bennett said. “If opposing teams did not double team him, that ended up being a problem for them. If they did double team, that opened up other opportunities for his teammates, which was also a huge plus.”

Syracuse is scheduled to open its season on the road at Boston College, Sept. 4, and will have its first game at the Carrier Dome, Sept. 19, against Colgate.

Alberga knows he has plenty of hard work ahead and plans to make the most of this opportunity.

As to what he expects when he puts on his Syracuse uniform for the first time, time will tell.

“Until I get to that point, I am not even going to know how to put it into words,” Alberga said.

“Once that happens, it’s going to be so unreal and so unimaginable.”