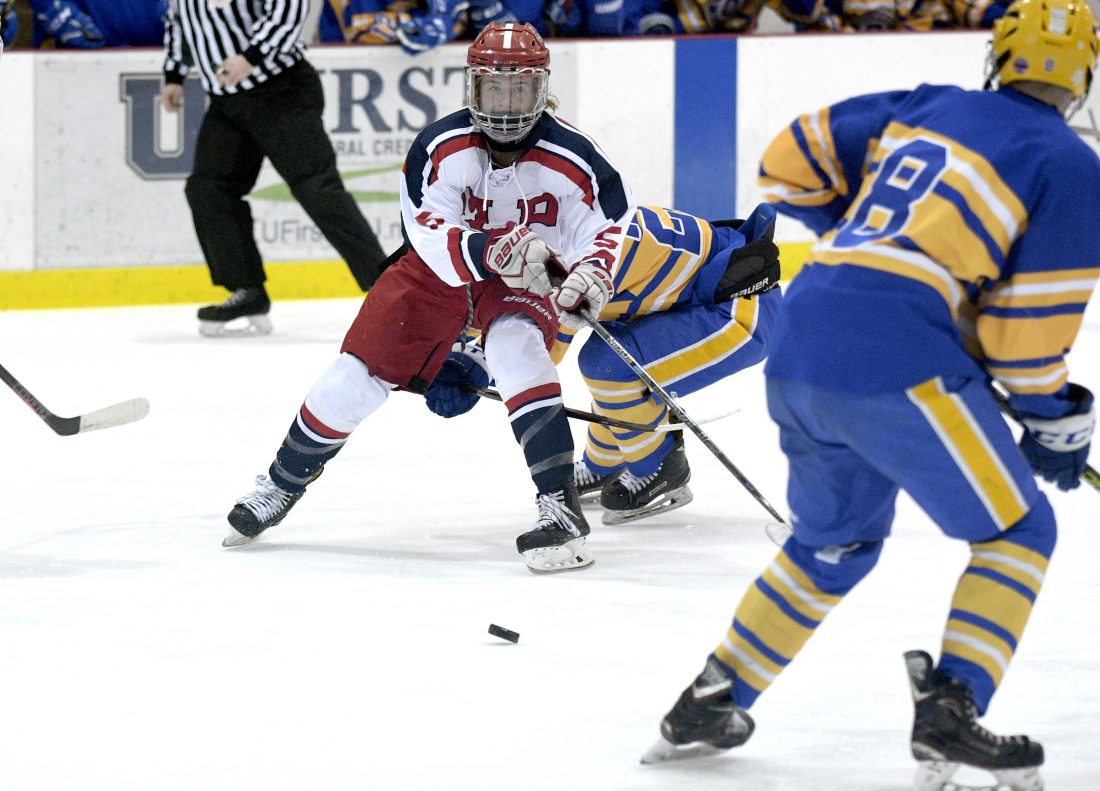 PLATTSBURGH — A historic run for the Saranac Lake Placid boys hockey team came to a painful end Saturday at SUNY Plattsburgh’s Stafford Arena in a 6-4 loss to Queensbury in the regional championship game.

Competing in its first season as a combined team, SLP went undefeated in Section VII play to claim the league title, and then advanced to face the Spartans in a game that saw the winner earn a trip to the state Division II final four this coming weekend at the Harborcenter in Buffalo.

SLP was originally slated to host the regional final on home ice at the Saranac Lake Civic Center, but because of a huge demand for tickets and limited seating, the contest was moved to Stafford Arena on Thursday.

Despite competing without Section VII’s most valuable player, Dylan Amell, and defensemen Dustin Patterson, who were both suspended due to disciplinary reasons, SLP held one-goal leads on three occasions. But the Section II Spartans took control with with four unanswered goals, starting with a tally by Jared Chamberlin with 5:15 remaining in the second that forged a 3-3 deadlock. Josh DeMattos then scored late in the period to give Queensbury its first lead of the game at 4-3, and the Spartans stayed on top the rest of the way.

SLP head coach Keith Clark, whose team finished with a 15-7-1 record, said he was proud of the way his players pulled together against the veteran Spartans, who returned 21 players from a squad that marched all the way to the state Division II championship game a year ago. 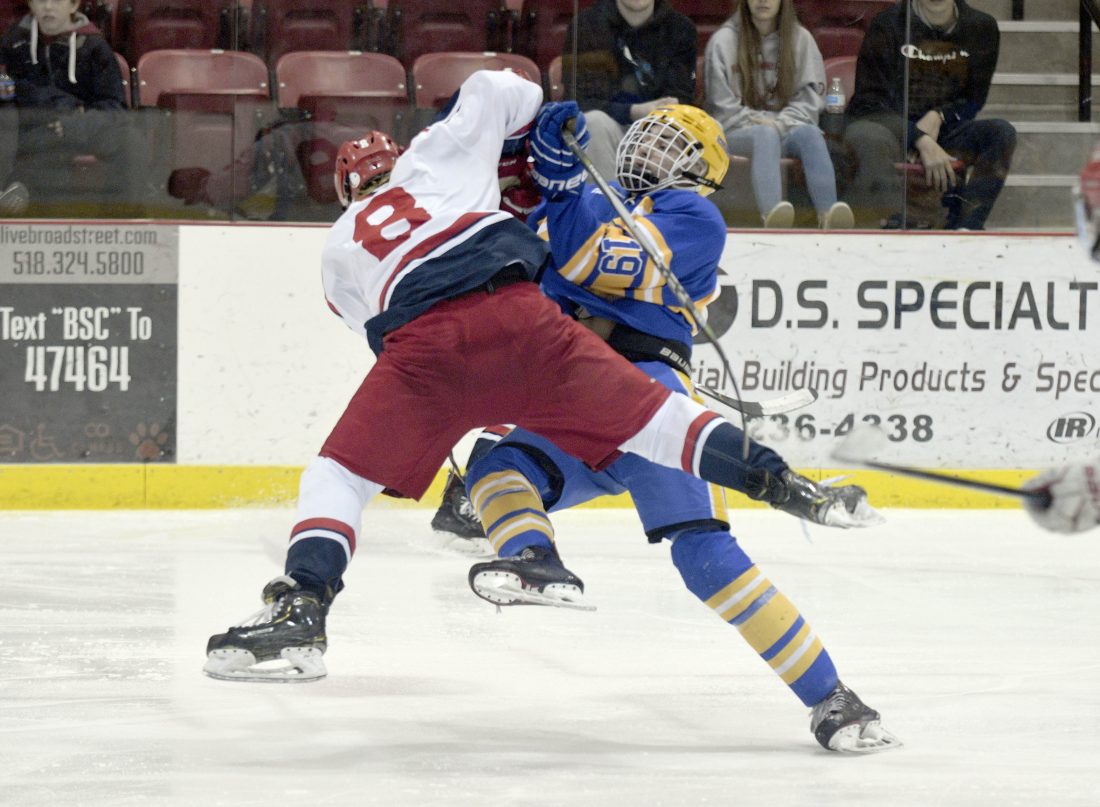 “After we won the sectional game, getting ready for this one we had to deal with some adversity,” Clark said. “I was really impressed with how the team handled that and just really mentally prepared to play the game in front of us. There was a 24-hour period where we had to change the venue and lost two players. We played with a lot of heart, a lot of guts. We gave it everything we could.”

Junior Rhett Darrah led SLP with a pair of goals and Camden Reiley and Carter Sturgeon each found the back of the net once in the setback.

DeMattos and Devon Salone each netted two goals in the victory and Chamberlin and Paul Wright added one apiece for the Spartans, who improved 14-5-2 and next face Whitesboro in a state semifinal matchup Saturday in Buffalo.

In most games this season, SLP held big advantages in shots on goal, but the Spartans turned the tables this time around, outshooting the Section VII champions 46-25. Despite being under fire from the outset, SLP escaped the opening period in a 1-1 tie. Darrah put his team on top first, knocking a rebound past Queensbury goalie Blake Powers 3:55 into the game with Hunter Wilmot and Tyler Hinckley assisting on the play.

Salone evened the score for Queensbury with 3:47 left in the first.

The teams combined for five goals in the second. Darrah came through again to start the scoring, burying his second of the game less than a minute into the period when he tapped home another rebound following a shot from the point by Sturgeon for a 2-1 SLP lead. Queensbury tied it 64 seconds later it on a goal by DeMattos. Reiley lifted SLP to a 3-2 lead on a wrist shot at the 5:15 mark, and Chamberlin pulled Queensbury even again with 5:15 left on the clock.

DeMattos then scored what may have been the biggest goal of the game, pouncing on a turnover in SLP’s defensive end of the rink and firing a wrist shot past netminder Anders Stanton with 2:04 left in the second. The goal marked the first time the Spartans led, and they tacked on two more straight tallies in the third to seal the deal. Wright upped Queensbury’s edge to 5-3 with 4:30 gone in the third and Salone notched his second of the game with 5:28 remaining in the period to round out his team’s scoring.

Sturgeon, SLP’s first-team Section VII sophomore defenseman, netted the game’s final goal when he fired home a wrist shot from the slot with 1:33 left on the clock. SLP pulled Stanton from the net for an added attacker during the last minute of action but failed to score.

Long-time Queensbury head coach Dean Williams said experience, which includes 10 seniors on the roster, helped his team pull through in a big game.

” It was good that we didn’t get discouraged,” Williams continued. “They score, we answer, they score again, we answer again. You can say a program has been here before, but a lot of our guys right here have been in games like this. There wasn’t a lot of panic on the bench.”

Wilmot, a Lake Placid High School student and one of eight SLP seniors, said although the season came to a tough end, it’s been a memorable one.

“It was good season, and I really think we meshed well overall. We were just a family out there,” Wilmot said. “Tonight, we just faced a few obstacles but it’s not an excuse. We gave everything we had out there. That’s all we could do.

“I think we played great, they were the better team in the end,” Wilmot added. “They had a good forecheck and they were just fast. We weren’t ready out of the gate. At the end I thought we were playing well and playing to our strengths. This was a great experience that I’ll remember the rest of my life.”

“In the first period we got pushed around, the second we pushed back and played with a lot of vigor, and the third we played with a lot of heart and dug in,” Clark said. “We have eight seniors on the roster who have contributed a lot. We’ll lose a lot with those seniors. They’ve had great careers. In one year they have left a mark that is kind of standard for years to come.”

Last year, Queensbury lost to Skaneateles in the Division II final at the NYSPHSAA Boys Ice Hockey Championships in Buffalo. The Spartans are hoping to get back to that game again this time, and could end up facing the same opponent if they get past Whitesboro. 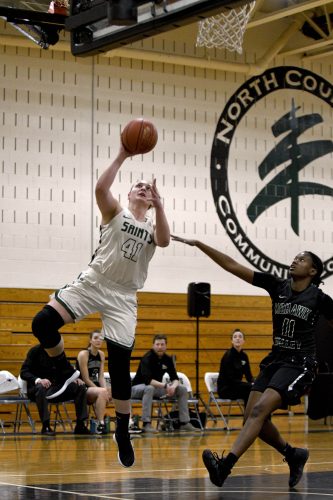