Caylen Skiff follows through on a throw. (Kris Alberga photo) 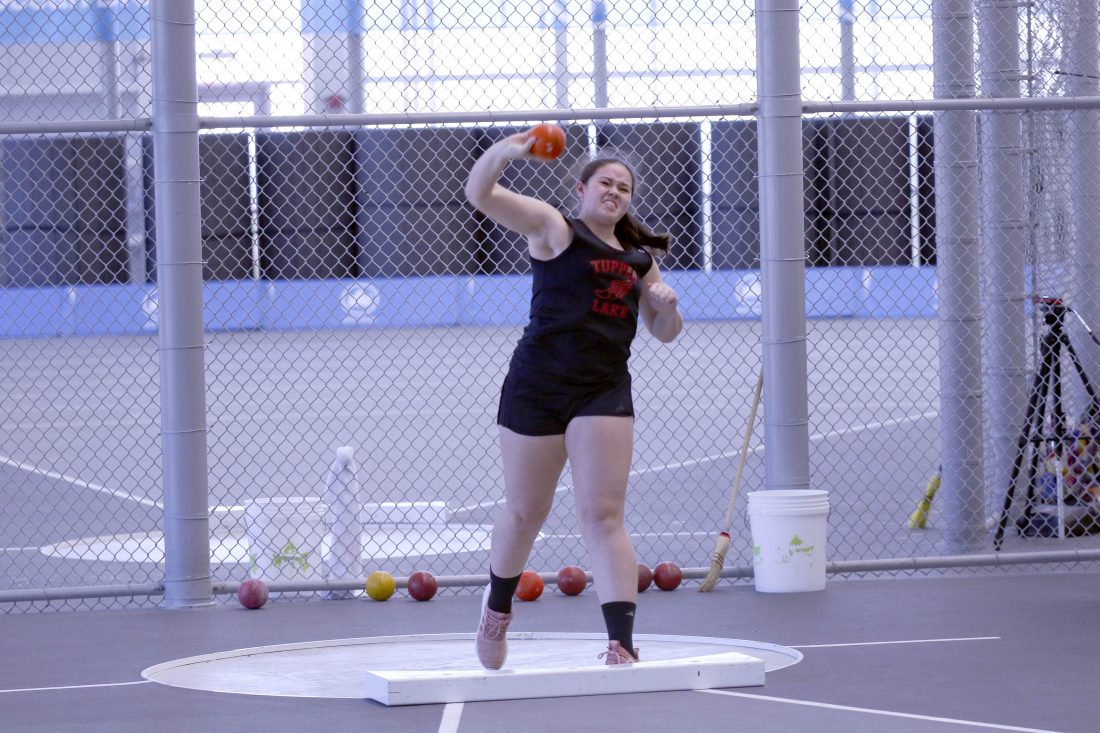 Seniors Patrick Alberga and Caylen Skiff, juniors Peter Fogarty and Micah McCulley and sophomore Mia Sanford all represented the Red Storm, as well as Section VII at the meet. They competed against the best athletes in New York state, from public as well as private high schools.

Alberga turned in the top result for Saranac Lake, medaling in the shot put with a fifth-place finish. He came through with a personal-best effort of 53 feet, which established a new indoor record for Saranac Lake’s track program. Saturday’s result is the top throw of Alberga’s career in both indoor and outdoor track.

Alberga’s previous best was 52-2 during the spring track season a year ago, and Ellsworth said the hard-working senior could be among the best in New York in Division II when the spring state championships roll around in June.

“Patrick has put a lot of time into this,” said Ellsworth, adding that Alberga has been undefeated in both indoor and outdoor shot put since his sophomore year. “He’s never been a superstar athlete. He’s just worked and worked and worked. I think he’ll be right in the thick of things when it comes to outdoor at the state level in Division II.” 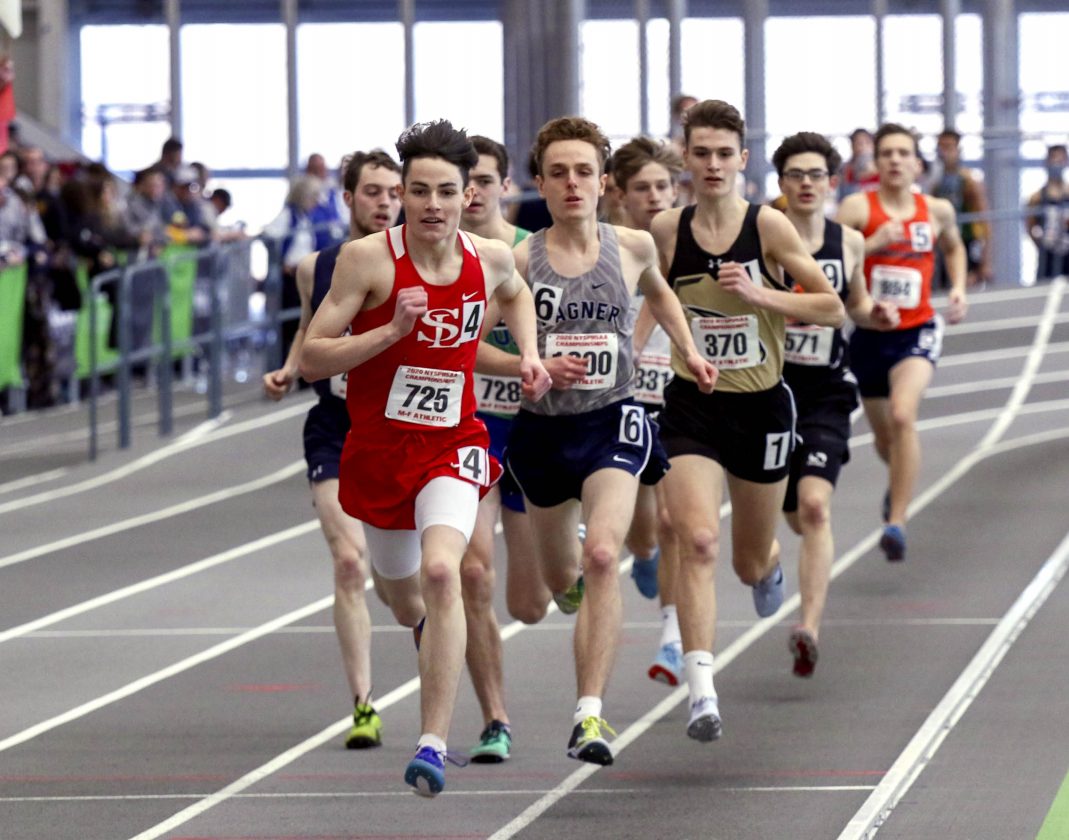 In addition to gunning for a strong finish state wide in shot put, Alberga will looking to break the outdoor school record of 53-8.75 that Ellsworth still owns.

With his fifth-place performance, Alberga qualified for the New Balance Nationals meet, which takes place in New York City on Saturday and features many of the best track and field athletes from across the United States.

Quinn Smith, a senior from Hampton Bays, was the boys shot put champion with a throw of 60 feet.

A softball player during the spring, Skiff competed in her second and final season of indoor track. She finished 28th in the girls shot put with a throw of 24-5.5, which was shy of the 28-5 effort she turned in to qualify for the meet.

“Caylen didn’t have a great day,” Ellsworth said. “It was her first time at the state meet, you’re competing in front of a crowd of 7,000 or 8,000, and that’s a lot of pressure. Although Caylen wanted to do better, she still enjoyed herself, she enjoyed the experience.” 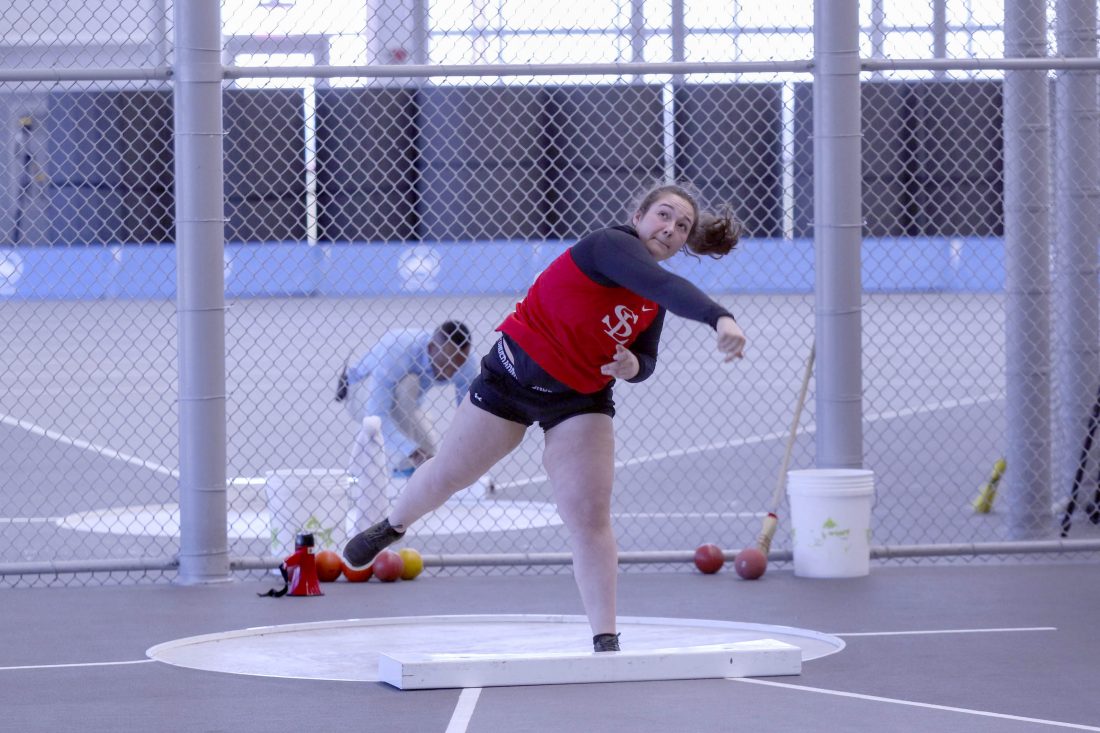 Caylen Skiff follows through on a throw. (Kris Alberga photo)

Lancaster’s Natalia Surdej was the girls shot put winner with a 42-9.75 throw.

Sanford was Saranac Lake’s third field athlete at the indoor meet and finished 28th in the girls weight throw among 34 competitors. A first-year member of the Red Storm’s indoor squad, she tossed the 20-pound weight a distance of 34-11.5. Sanford’s top effort to date was a seeding throw of 38-11. Monique Hardy of Webster Thomas was the girls weight throw champion with a heave of 63-10.5.

Ellsworth stated that this is the first season Saranac Lake has participated in the weight throw and said that Sanford did a great job.

“The weight throw is new to Saranac Lake,” Ellsworth said. “We’re still learning the technique, we’re learning a new movement, and I’m really proud of her progress. She was the only sophomore in the weight throw at the state meet. Mia is an up-and-coming younger thrower and I think she’ll be right in the mix for outdoor in Section VII this spring.”

Fogarty and McCulley are two-time state champions running cross country for Saranac Lake, and they had strong showings in their distance events Saturday, despite coming up shy of the top competitors in their disciplines. 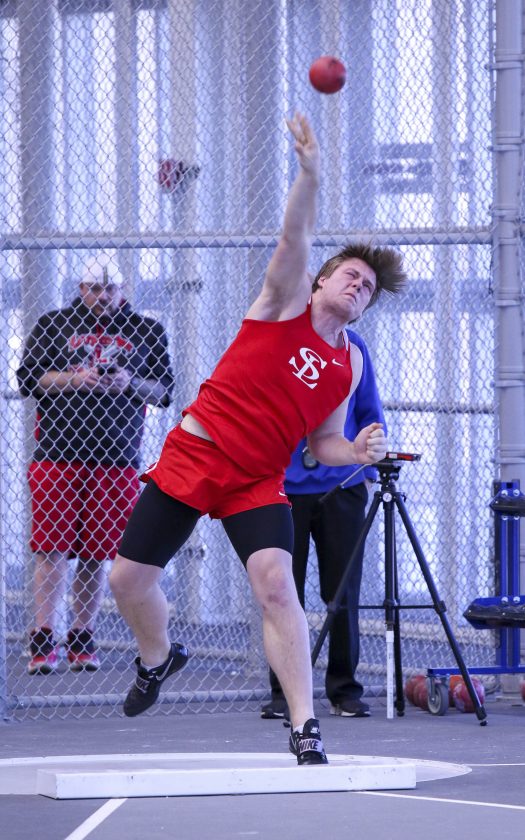 Fogarty finished the 1,600 a 4:39.91, a result that Ellsworth described as a good time for Northern New York.

McCulley also turned in a personal-best indoor performance at the meet, finishing the 1,000 meters in 2:40.5 to place 25th place in a field of 29. McCulley’s time was less than 11 seconds behind the champion, Michael Danzi, of Smithtown West, who won in 2:29.96.

“It’s nice to get our kids down from our section and get a taste of sports outside the North Country,” Ellsworth said. “This meet had the cream of the crop all competing on one day, and that type of field really gives our kids a true picture what is out there. I was proud of all of them in the way they performed.” 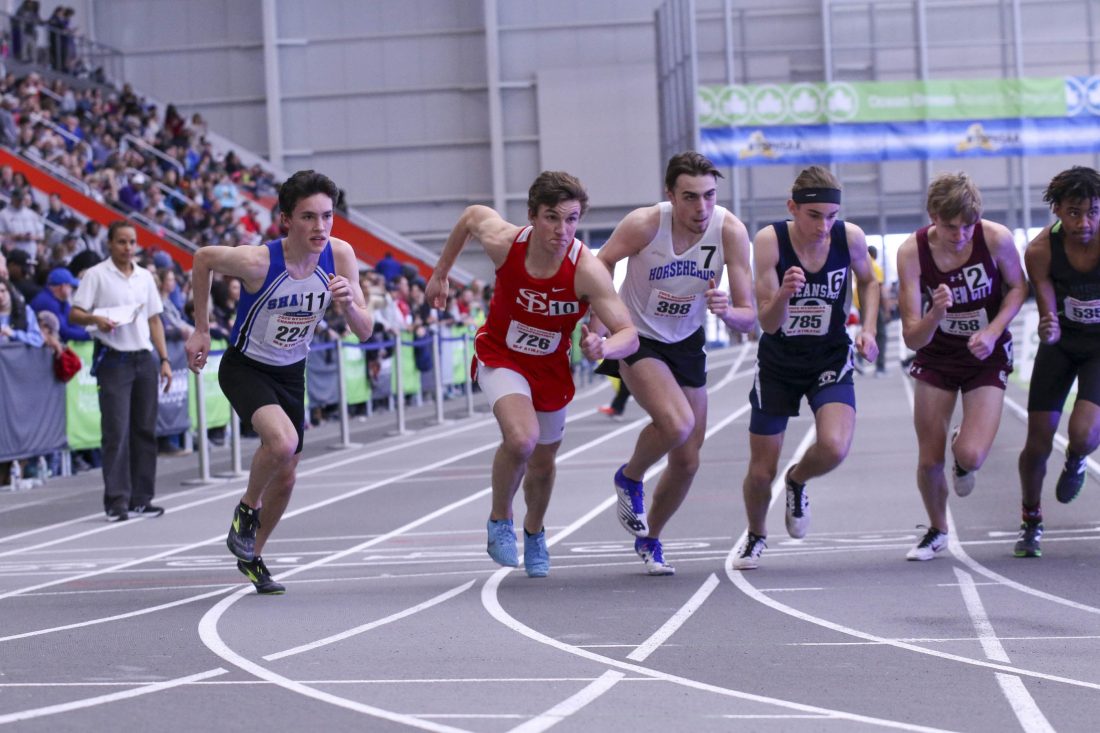 Tupper Lake had one student-athlete, Ava Cuttaia, competing. The senior finished 27th in the girls shot put with a throw of 28-3.