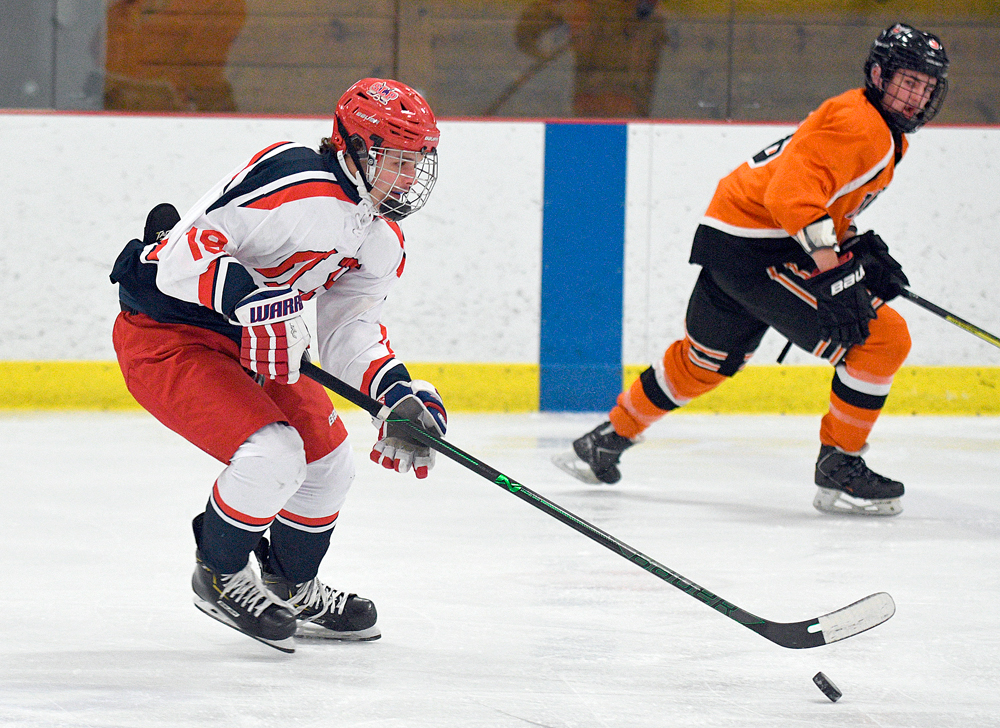 SARANAC LAKE — There’s one thing that appears to be certain when it comes to boys hockey in Section VII this season. From the top of the standings in five-team league to the bottom, you can’t count any squad out as the playoffs approach.

After clinching the regular-season title on Friday night with a 2-1 overtime victory over Northeastern Clinton, Saranac Lake Placid hosted the team at the bottom of the standings Tuesday when the Plattsburgh Hornets visited the Saranac Lake Civic Center.

In another back-and-forth Section VII battle, the two teams finished in a 3-3 deadlock. Plattsburgh netted the first and final goals of the game, and in between, host SLP grabbed 2-1 and 3-2 leads but ultimately had to settle for a tie. Although SLP no longer has a perfect record in Section VII, it’s still unbeaten with a 6-0-1 mark with one regular-season game remaining, which will be on the road Thursday against Beekmantown.

As has been the case in most games this season, SLP held a big advantage in shots on goal, this time out shooting the Hornets 45-20. SLP’s best period of the night was the second, which saw Rhett Darrah score 22 seconds into the stanza to tie the game at 1-1, with Tyler Hinckley then lifting the hosts to a 2-1 edge when he scored at the 9:35 mark.

Sophomore Hayden Colburn answered for Plattsburgh less than a minute later with a goal that sent the contest into the third tied at 2-2, and the teams then traded goals in the final period to forge the tie. SLP jumped ahead 3-2 when Hunter Wilmott backhanded home a rebound for a power-play goal at the 3:53 mark, and Plattsburgh senior defenseman Ethan Vaughn netted the game’s final goal, scoring with 5:27 remaining in regulation. 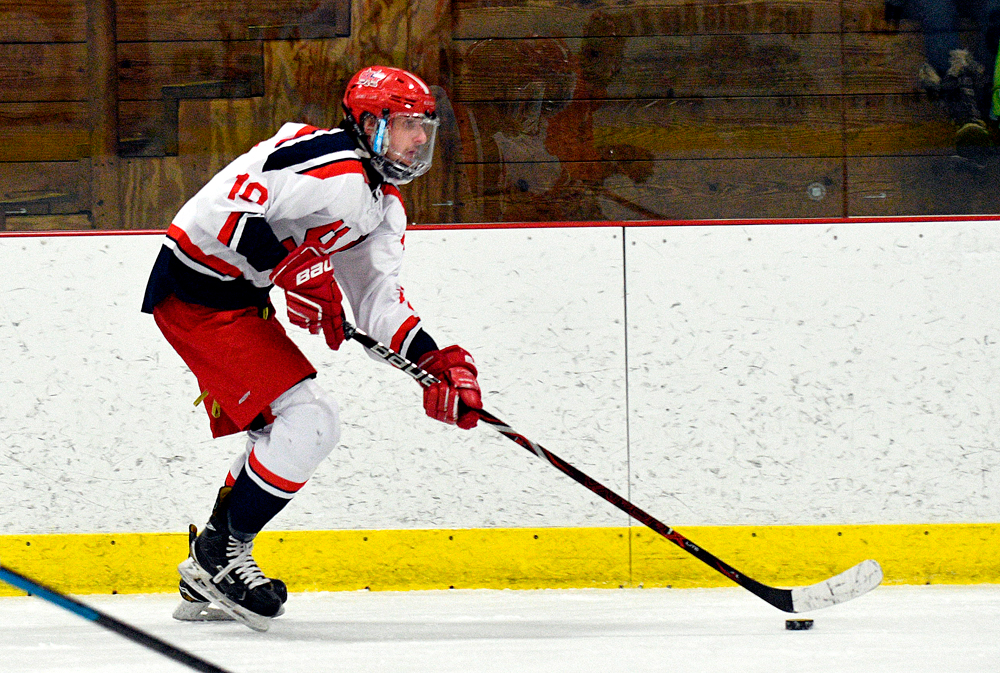 SLP, which locked up the top-seed for the playoffs and will host a semifinal game, now owns a 12-6-1 record overall. The Hornets wrapped up the regular season with a victory and a pair of ties and are 5-10-4 heading into the playoffs.

“I think in the league right now on a giving night, anybody can beat anybody,” SLP head coach Keith Clark said. “I think our league has kind of shown that throughout the year, and give Plattsburgh a lot of credit. They came in here and battled really hard.

“I thought our second we were really good,” Clark continued. “We generated a lot of chances. We responded from a pretty slow first period. I thought our second period was the high point of the night for us. Unfortunately, we just didn’t bury more chances, and in the third period, we didn’t repeat our second-period effort.”

All three goals that SLP gave up started with turnovers deep in Plattsburgh’s defensive end of the rink. The Hornets scored the lone goal of the first period, getting a shorthanded tally by Tyler Reid at the 10:34 mark with Ethan Kay and Colburn assisting on the play.

Darrah then tied the score, netting his 15th goal of the season just 22 seconds into the middle period when he collected blue-line-to-blue-line pass from Ben Munn and then beat Plattsburgh goaltender John Dublanyk on a breakaway. Hinckley then put SLP on top 2-1, taking a pass from Hugo Hobson and scoring from in close to cap off a 2-on-1 rush.

Colburn evened the game at 2-2 off an assist from Jackson Kain.

Wilmott’s power-play tally 3:53 into the third was assisted by Carter Sturgeon and Dylan Amell.

Reid picked up an assist on Vaughn’s goal that made the score a 3-3 final.

“Our guys work hard, and I’m just proud of the boys,” Plattsburgh head coach Joe Tolosky said. “We knew that if we wanted to have any effect on the standings we had to come in and win this game, and I thought we worked incredibly hard. Having some struggles, being really close in games a lot this year and being in last place in the standings, a lot of times some guys can give up on themselves. But this group hasn’t. They are resilient and they came up with a great effort.

“We had these guys in overtime earlier this year and came up short,” Tolosky added. “SLP has a big, physical good team. I thought we pressured them pretty well. It was an exciting game. Some good stuff. I’ve never seen the league this close.”

Dublanyk was solid in nets for the Hornets and finished with 42 saves. Junior Anders Stanton recorded 17 saves between the pipes for SLP.

“It was a little bit of a roller coaster game for us,” Clark said. “Not-so-great first, a real good second and then not so good. You have to be consistent at this time of the year. We’ve really been talking about trying to bear down on rebounds. I think we were there a fair amount, but it didn’t happen. Plattsburgh competed hard. We have to move on — a big game Thursday at Plattsburgh State.”

SLP takes on Beekmantown Thursday at SUNY Plattsburgh’s Stafford Arena starting at 6 p.m. to end the regular season, and then will take on the winner of the fourth and fifth seeds at the Saranac Lake Civic Center on Thursday, Feb. 27 in a Section VII semifinal.