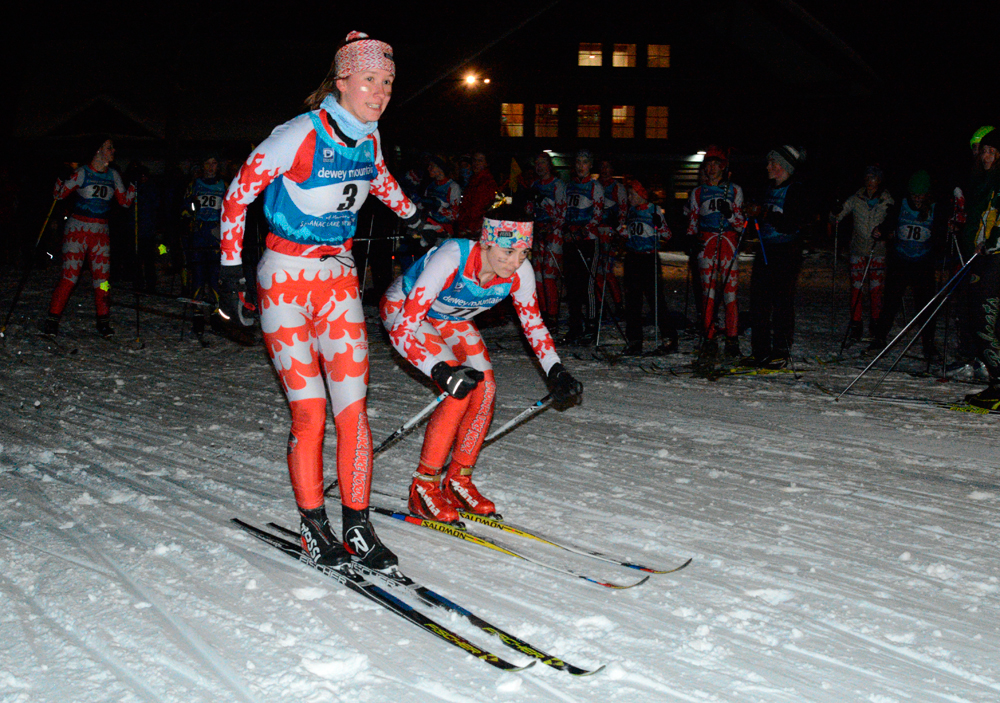 Racing on great snow and in comfortable temperatures, which have been common conditions recently at Dewey, the Red Storm and the Blue Bombers competed in classic relays. They are the lone two schools representing the section in Nordic skiing. Thursday’s second and final day of the Section VII championships will take in Lake Placid at Mount Van Hoevenberg and feature freestyle racing.

Points from both days will be combined to determine the final makeup of the Section VII team heading to the state championships that take place Feb. 24-25. Some skiers from both schools have already qualified for the state meet based on points accumulated from races earlier this season, with the relay teams still to be determined.

The top nine boys and girls will will represent Section VII at the state championships as individual competitors, and the top boys and girls relay will be competing in the team event.

There was little drama in the opening girls sectional team race, as Saranac Lake’s top trio skied to victory by more than five minutes to keep its unbeaten season going. 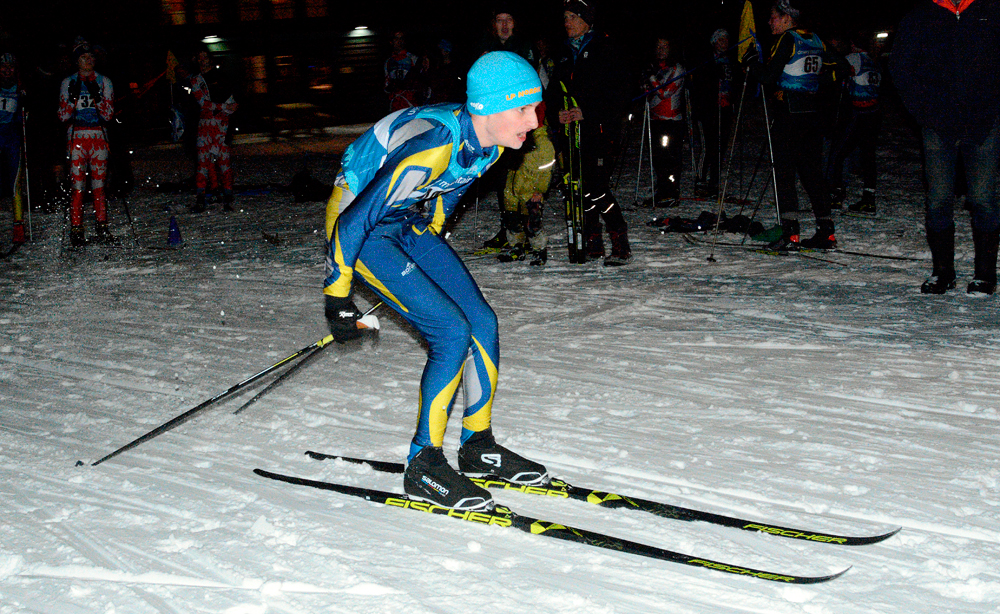 Linck, a senior who has already qualified for her fourth trip to the state championships, is just one win away from representing her school on the team relay, with that possible clinching race just two days away.

“So far we have an undefeated season, so we’re really excited about that and hoping to continue it as long as we can,” Linck said. “Last year, we did pretty well throughout the season but we were closer with Lake Placid, and they ended up beating us at sectionals last year. I went as an individual from Section VII last year. We want to represent Saranac Lake at states this year as a team.”

“Really, we’re pretty excited about this season,” Linck added. “I know we’re sending a bigger team than we have in awhile, and it’s nice to see some of the younger girls getting to go to states for the first time.”

Kelting, a freshman, had the fastest individual time in the girls race, finishing in 8:24. 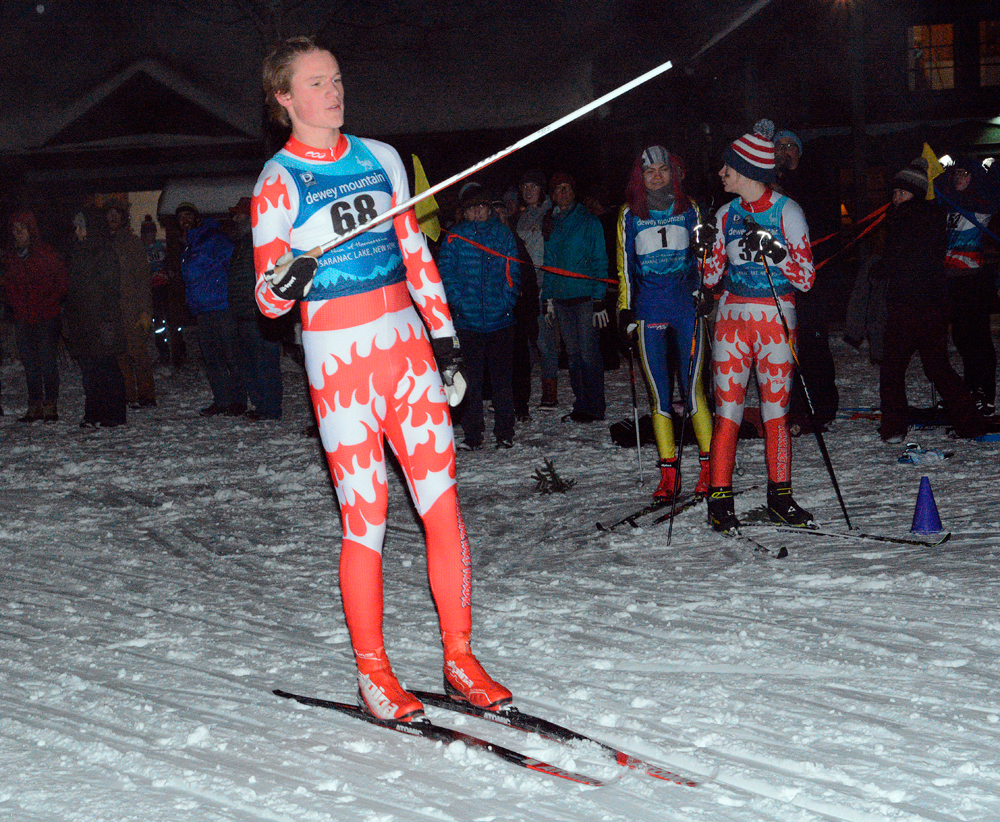 While the girls race lacked drama in terms of the outcome, the top boys relay from each school found themselves in a battle of twists and turns. In the end, a bad break for Saranac Lake became a big break for Lake Placid that determined the outcome.

In a race that saw the Blue Bombers lead after one leg and the Red Storm then rally ahead before being stonewalled by a broken pole, Lake Placid’s Mike Skutt, Max Flanigan and Andrew Scanio finished on top in 23:54, and Saranac Lake’s Colter Cheney-Seymour, Adrian Hayden and Nick Kelting settled for second place in 24:27. Third place went to Saranac Lake’s Reuben Bernstein, Griffin Smith and Sam Ash, who finished in 26:37.

Skutt, a senior, gave Lake Placid the lead when he skied out to a 7:40 split time before tagging Flanigan. Hayden then ate up the gap and put the Red Storm in front with the fastest boys split, a 7:37, and tagged Kelting for the third and final leg. Scanio was well back as Lake Placid’s third skier, but was able to surge ahead after Kelting snapped a pole on a climb.

“I felt bad for him. It was right on the uphill,” Scanio said. “He had a huge lead on me and then I see a guy off the trail with half of a pole in his hand. I passed Nick Kelting and he said ‘I broke my darn pole,’ and I said I’m sorry. I felt kind of bad for him, but I still think I had a good race though. I wasn’t as prepared as I wanted to be, but I still think I did did pretty well.”

“I pushed myself so hard in the beginning,” Skutt said. “I came through with a pretty good lead, that was awesome, and then Max held it pretty well, and he was right behind. I felt pretty bad about Nick’s pole breaking, but that’s just ski racing.

“This is my third year ski racing, it will be my second trip to the states,” Skutt added. “The podium there would be sweet individually, and maybe we can pull out another win on the relay. That was a big win for us today. That gave us a slight leg up.”

The question now is will Saranac Lake be able to rebound Thursday to take the relay title, or will Lake Placid boys come through. The answer will come Thursday when Mount Van Hoevenberg hosts the conclusion of the 2020 Section VII Nordic championships starting at 4 p.m.