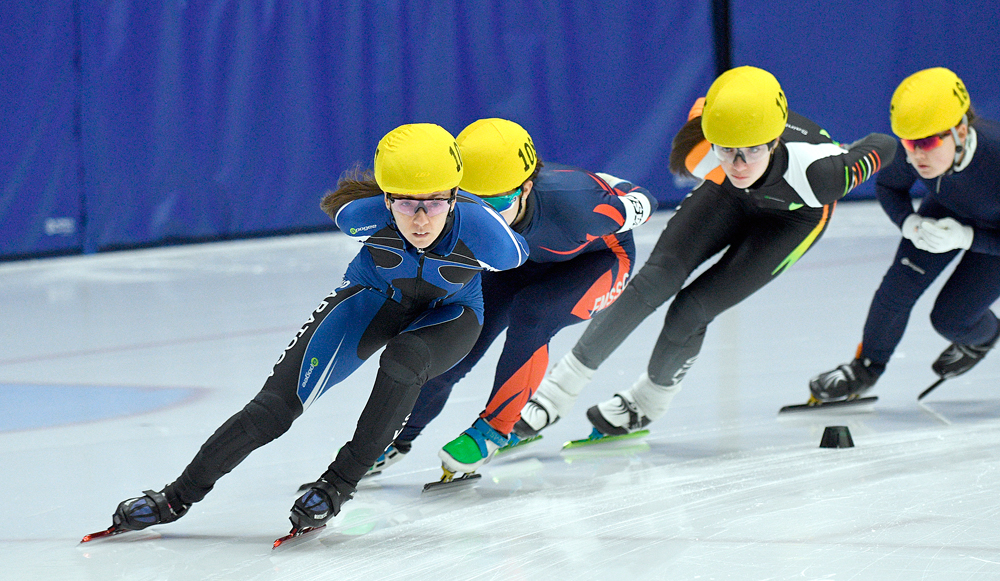 Mary Magnus, of Saratoga Springs, leads a pack during an early lap of a 1,000-meter heat at the US Speedskating American Cup Short Track series event Sunday at the Olympic Center. (Enterprise photo — Lou Reuter)

LAKE PLACID — The Olympic Center hosted its most competitive short-track speedskating event in 20 years over the weekend, and when the racing wrapped up Sunday on the 1932 Rink, everything had fallen into place to make the gathering a major success.

Fifty-four skaters from the United States, Canada and an athlete from Hong Kong participated in three days of racing on a level just a step below the World Cup and World Championship caliber.

Most of the skaters were up-and-coming athletes with Olympic dreams, ranging in age from 15 into their 20s. The oldest in the group, however, was Saratoga Springs’ Mary Magnus, a former U.S. National Team member who is now a mother of three and still quite competitive.

The event, which saw big crowds all three days, was the third and final competition of this season’s US Speedskating American Cup Short Track series. The first two meets took place in Salt Lake City, Utah, in August and December 2019. 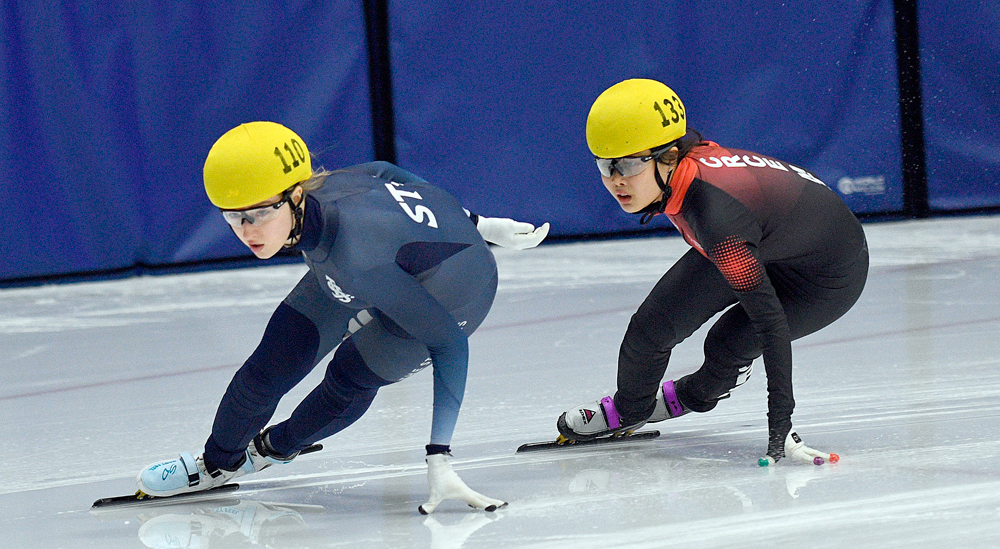 American Kamryn Lute holds a slim lead over Canada’s Miao Qi during the women's 1,000 A final on Sunday in Lake Placid. Qi eventually overtook Lute to claim the victory in the race decided by a a fraction of a second. (Enterprise photo — Lou Reuter)

Tom Miller, a longtime local coach who works with the Adirondack Speedskating Club, said he was thrilled to see high-level short track returning to Lake Placid and noted how competitive the racing was.

“What I was really happy with was seeing that the Quebec skaters were so evenly matched with the American skaters,” Miller said. “Every race really really competitive, extremely competitive. We haven’t had this level and this many Canadians here in a long, long time. I can’t wait to see this here again. We want to make this an annual event.”

Miller said there would have been even more skaters competing, perhaps double the amount, if the racing in Lake Placid didn’t conflict with a World Cup event in Europe and a big regional meet in Virginia, which were held at the same time.

“All the officials from US Speedskating told me this was a first-rate event,” he said. “It’s great that they saw how well Lake Placid pulled this off. You couldn’t have asked for anything more.”

Three 15-year-olds from different parts of the country and first-time competitors at the Am Cup level were among the participants in Lake Placid. They had varied success but said they enjoyed racing in a top-notch junior field.

From the left, Benjamin Thornock, Wesley Park, Jonathan So and Marcus Howard get down low while rounding a corner during tight racing in a 1,000-meter heat Sunday at the Olympic Center. (Enterprise photo — Lou Reuter)

Kamryn Lute hails from the Washington, D.C., area, which is a hotbed for short track. She was one of the top females in the field. Earlier this month, she was competing at the Junior World Championships in Bromio, Italy, and she skated to a pair of runner-up and one third-place finish in Lake Placid. At age 15, Lute has been involved in the sport for 10 years is already among the highest-ranked female short-track speedskaters in the nation.

Lute said she first started speedskating as a 5-year old after watching short-track racing from the Vancouver Winter Olympics on television.

“I was just watching the 2010 Olympics, and I was really interested in the sport and how they got to be so fast,” Lute said. “It was really interesting to me. I wanted to try it because there was a club in the D.C. area, and I’ve liked it ever since then. The speed and all the tactics that go into racing, it’s really exciting, and I love the adrenaline rush.

“Even though the training is hard, I enjoy the process of getting there and being able to see results,” Lute continued. “The Olympics have been my goal since I started, so hopefully that happens. My goal has always been 2022, because that’s been as early as I can qualify, but if I don’t make it then, I’ll keep trying until I do.”

In the Am Cup in Lake Placid, each skater had the opportunity to race in quarterfinal, semifinal and final heats, with finish times from the qualifying rounds determining what finals the athletes were placed in. The fastest heats were the A finals, followed by B, C and so on.

Lute competed in all the A finals.

“For my first year doing Am Cups, I was pretty surprised with my results this year, in a good way,” Lute said. “I’ve gained a lot of experience skating with older skaters, most of which are at World Cups right now.”

George Wheelock of Old Greenwich, Connecticut, raced in Lake Placid earlier this month in the Empire State Winter Games and returned for the Am Cup event over the weekend. Although he didn’t compete in the fastest heats, he was pleased with how he performed against some stiff competition.

“I’d say it’s the best racing I’ve done all season,” Wheelock said. “I was in the D finals and guess I was OK with that. It’s really cool being in there with all of the fast skaters, and all the experience you get, it’s really rewarding. I wasn’t in the top echelon of all the skaters, but I think I did pretty well in the middle. It was a good three days here.”

Hudson Halling hails from the Salt Lake City, Utah, area, and he also competed in the D final in Sunday’s 1,000-meter race. The 15-year-old won the heat, which gave him a satisfying finish to a weekend that didn’t start off very well. The races kicked off on Friday with the 500-meter competition, and Halling chipped a piece off a skate blade. As a result, he went through the rest of the competitions skating on his backup blades.

The young skater was also returning from a concussion and only had one practice session prior to his trip to Lake Placid.

“I only skated once before the competition, and I was a little bit off,” Halling said. “In my second race, I broke my blade, and my backups, they were a little bit shorter, so that made things a little tougher. Overall, I’m pretty happy. This sport, it’s really fun, it’s intense and exciting, and sometimes it can get a little dangerous.”