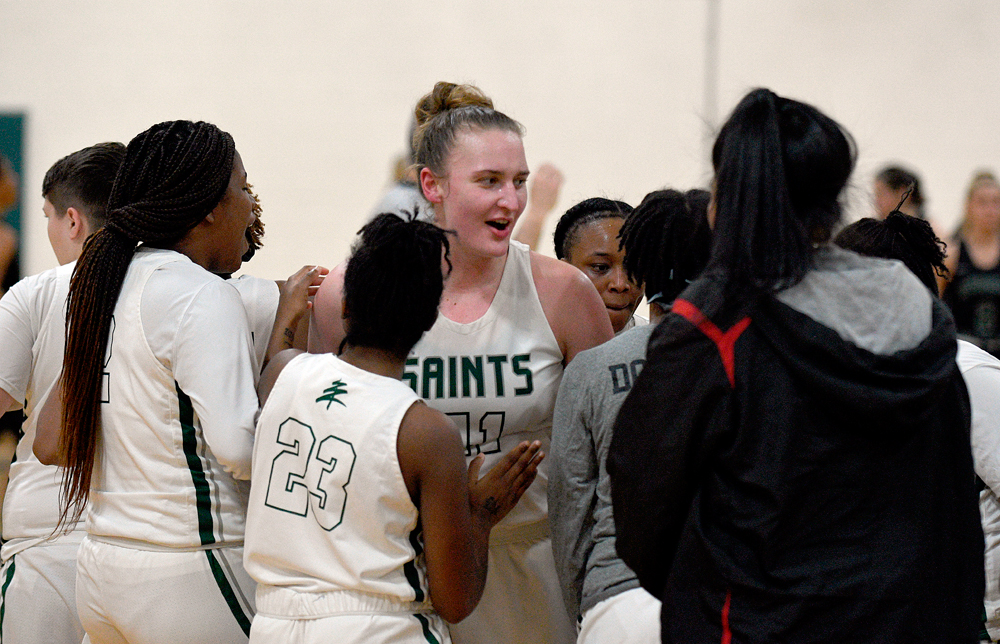 Kayla Carder is greeted by Saints teammates during a timeout after the sophomore all-American drained a trio of unanswered three-pointers early in the fourth quarter of Tuesday’s game. (Enterprise photo — Lou Reuter)

SARANAC LAKE — With an opportunity to host the NJCAA Region III women’s basketball finals for the first time in school history on the line, the North Country Community College Saints poured it on in a quarterfinal game on their home floor Tuesday.

With all-American sophomore Kayla Carder and freshman Lavender Ward leading the charge, the Saints rolled to an 89-57 victory over Hudson Valley to reach the semifinal round of the Region III tournament. As the tournament’s top seed, North Country hosts the final four and will take on fourth-seed Mohawk Valley in Saturday’s first semifinal at the Sparks Athletic Complex with the opening tip off slated for 1 p.m.

Carder pumped in 26 points and Ward tossed in 23 as the Saints women took another step closer toward defending the Region III title they captured for the first time a season ago. Lauren Denny also reached double figures for the Saints with 10 points, and the freshman guard was also all over the court when it came to playing defense and hitting the boards.

Talesa Campbell tossed in nine points and Damoni Wells chipped in another eight points in the victory.

It took the Saints a little time to kick their offense into gear, but once they did, there wasn’t much Hudson Valley’s all-freshman lineup could do. 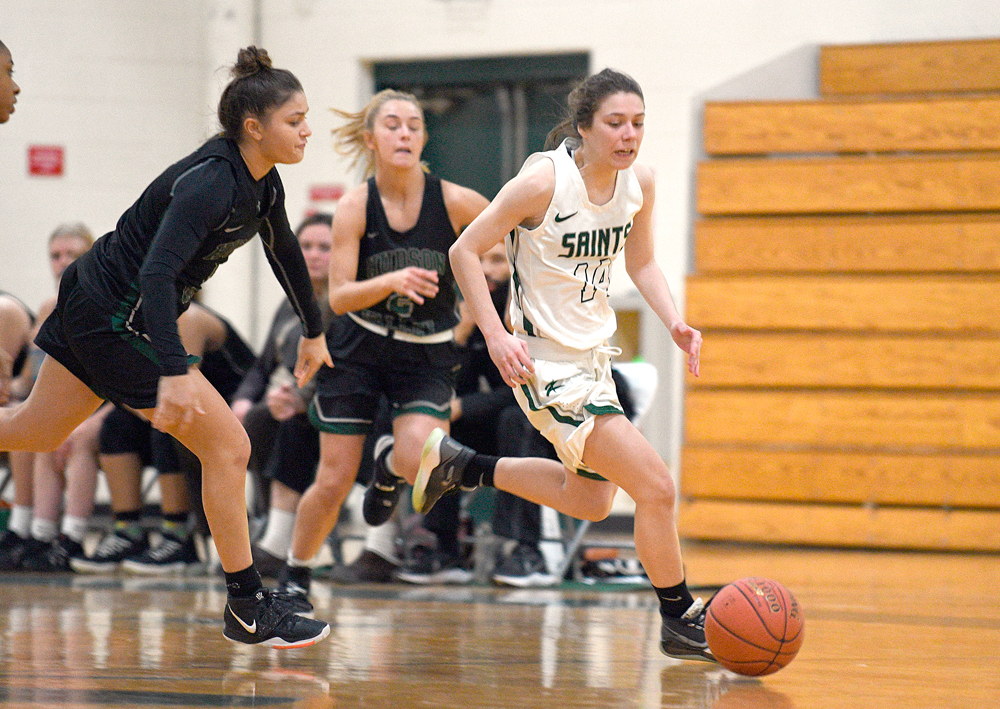 North Country guard Lauren Denny chases down a loose ball after creating a turnover during the second half of Tuesday’s game against Hudson Valley. Pictured for the Vikings are Emily Erickson (2) and Carrie Knaupp. (Enterprise photo — Lou Reuter)

The Saints drained a dozen three-pointers, and they did it in bunches. Campbell sank two shots from beyond the arc in the opening quarter to help NCCC take a 20-14 edge, and Ward dropped in a pair of back-to-back three-pointers in the middle of the second period to give the Saints a double-digit lead for good.

The Saints owned a 60-40 lead entering the fourth quarter and then really caught fire by draining six three-pointers down the stretch. They opened the period with an 11-0 run fueled by a trio of unanswered three-pointers all drained by Carder, and finished the quarter with 29 points.

NCCC head coach Jerrad Dumont said he happy with the way his team finished up Tuesday’s game, and he also liked seeing how Ward came through early before the Saints got their offense in gear.

“I thought we struggled to hit some shots early on, and then really hit them the second half,” Dumont said. “I think part of that was nerves. She (Ward) hit the offensive glass for us really well early. She got six points off the offensive boards by working hard and hustling and getting loose balls off the rim and grabbing them and putting them back in. 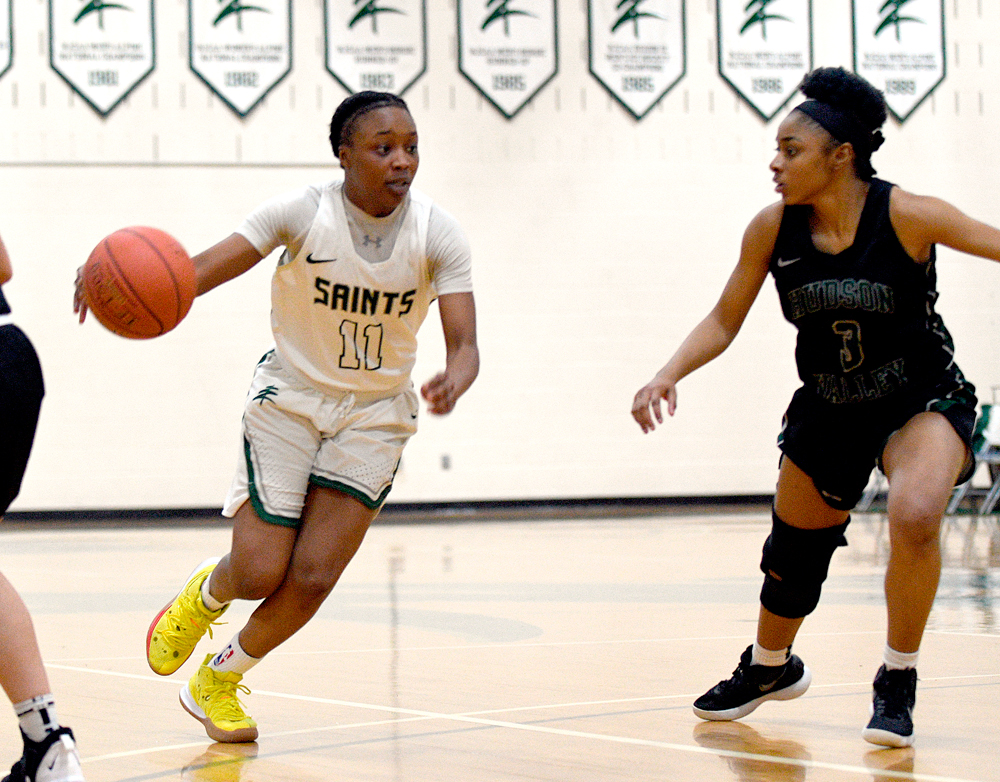 With the victory, the Saints completed a three-game sweep of the Vikings this season, with all each victory coming by double-digit margins. Hudson Valley finished the season with a 15-13 record.

“They were very well rounded today,” Vikings head coach Rob Coleman said of the Saints. “Previously when we’ve played them, they were very top heavy with one or two people really hurting us. They are aggressive. What we didn’t give them, they took. They were very assertive, and they play a very bend but don’t break defense.”

“Our season went just the way I thought it would,” Coleman added. “We were right over .500 with all freshman. We are one or two players away. If we had someone like Kayla to anchor, to lead our team, it would be way different. Recruiting, recruiting, recruiting — that’s what we’ll be doing from here on out.”

As a first-year player at North Country, Denny said she’s excited to have the Region III finals come to Saranac Lake.

“We play much better at home so it’s great that we’re hosting the regionals here,” Denny said. “We play well everywhere, but we play really intense here. Tonight we had energy from everyone — from the people who started, from the people who came off the bench, the whole team had energy. “Having the final four here, it’s awesome — good for us, good for coach, good for everybody,” Denny added “Everybody played their own game and played well. We played together, we always play together.”

A year ago, the Saints women were the second seed and traveled to Onondaga Community College for the Region III finals, where they won the tournament for the first time and ultimately finished third in the NJCAA Division III National Championships in Bethlehem, Pennsylvania.

This time around, North Country’s women are Region III’s No. 1 seed, and they’re heading into the weekend with a 26-3 record as the nation’s fifth-ranked NJCAA Division III team. And when you’re on top, you cant’ take anything for granted.

“I feel like there’s more pressure this time around,” Dumont said. “Last year we were the No. 2 seed, it was our first time in the regional finals, and we were going in as the underdog a little bit. We had something to prove. This year as the No. 1 seed, I think everybody is coming after us. We have to hold strong, defend hard and we have to score some points.”

The Saints will be facing a Mohawk Valley team in Saturday’s first semifinal game that has a 17-6 record overall and is ranked 11th in the nation in Division III. The Vikings advanced to Saranac Lake with an 85-61 victory over Jefferson Community College in a quarterfinal game also played on Tuesday. In that matchup, Jasmine Michaux poured in 46 points to lead Mohawk Valley.

Saturday’s second semifinal game at the Sparks Athletic Complex pits Onondaga against Herkimer and starts at 3 p.m. The winners will advance to Sunday’s final slated to start at 1 p.m.

The champion from this weekend’s Region III tournament will earn a trip to the NJCAA Division III women’s national tournament taking place March 12-14 at Rock Valley College in Rockford, Illinois.

On Saturday, the Saints won a home sub-regional final over Columbia-Greene by an 83-61 score to reach the quarterfinal round. As the eighth seed, NCCC’s men traveled to take on No. 1 seed Mohawk Valley, and the Hawks proved to be too much for the Saints to handle.

North Country’s men ended their season with a 16-12 record.