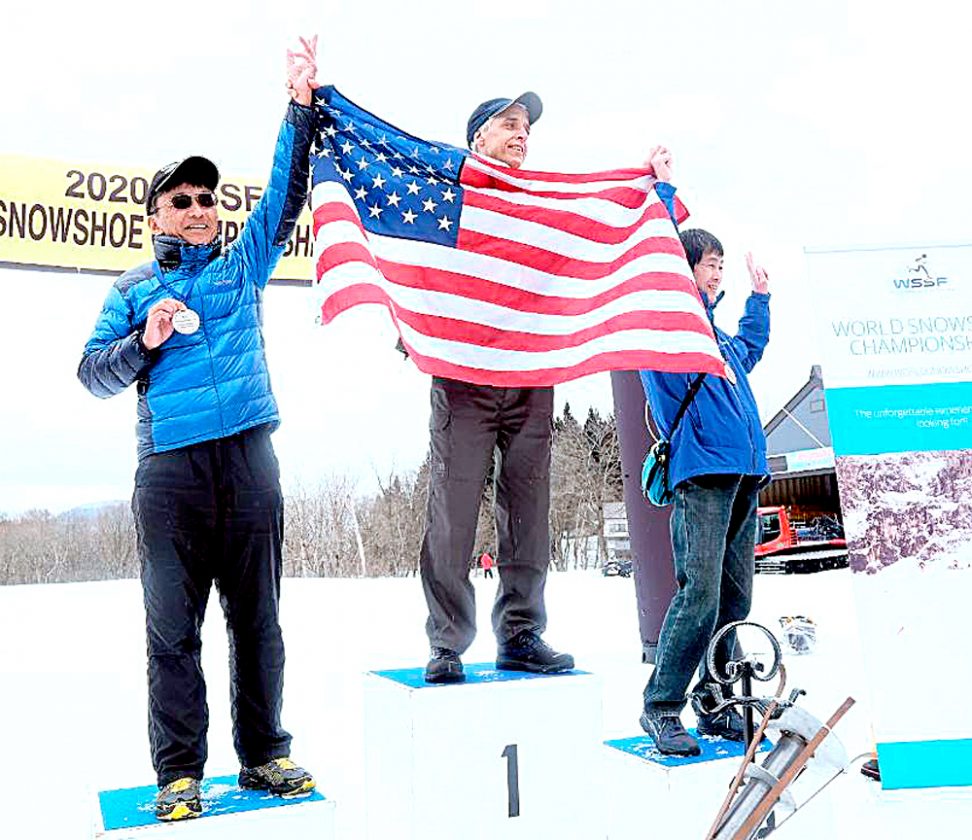 SARANAC LAKE — I’m sure everybody is familiar with that age-old saying, “The third time’s a charm.”

For Saranac Lake’s Dan Edelstein, the charm actually came the fourth time around.

On Feb. 16, Edelstein finally got the gold he had been chasing, winning the men’s 60-69 age group title at the World Snowshoe Federation Snowshoeing World Championships in Myoko City, Japan.

The 62-year-old, who found his passion for distance running just seven years ago, made his fourth trip in as many years to the sport of snowshoeing’s biggest annual competition. Edelstein’s first foray into snowshoe racing came four years ago in his hometown when Saranac Lake hosted the world championship competition at the Dewey Mountain Recreation Area, which is just up the street from his home.

As a first-year competitor in the 60-69 age group, Edelstein claimed the silver medal that winter on his home course on the very day he turned 59. After that, he decided to turn the event into an annual trip. In 2018, the world championships was in Spain, where he captured a silver. And last winter, Edelstein ran to a bronze in Italy, a race in which he admitted he may have expended a little too much energy walking around sightseeing prior to the competition. 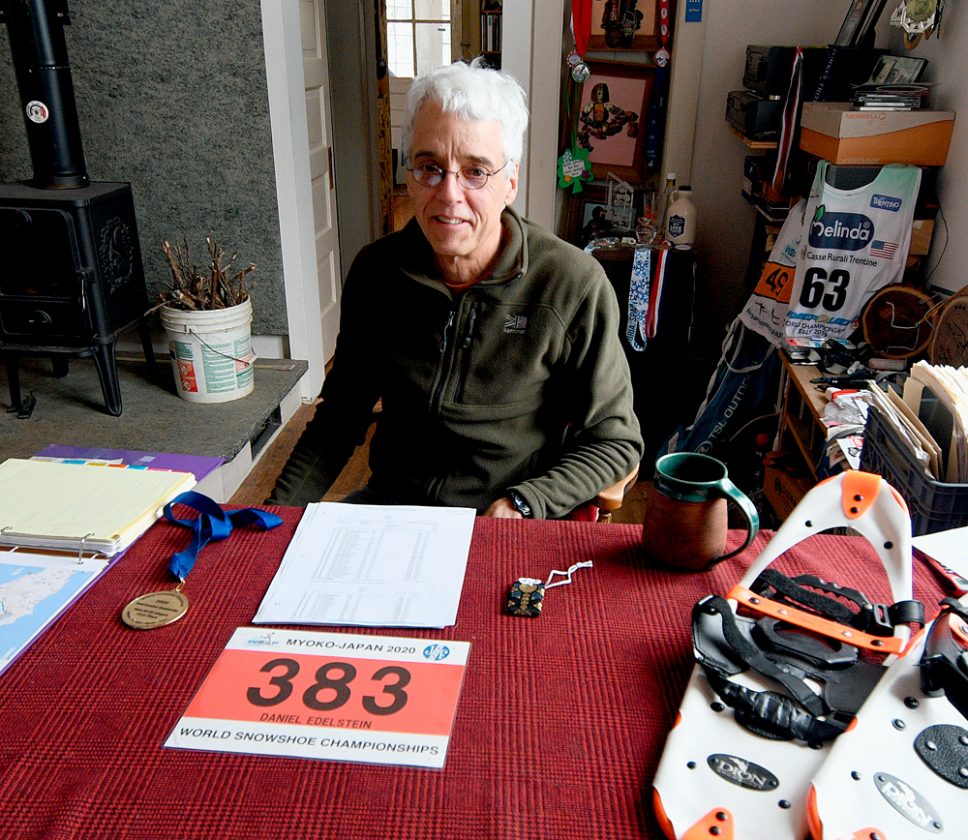 Dan Edelstein sits in his Saranac Lake home Thursday with a cup of coffee and the gold medal he won earlier this month at the Snowshoeing World Championships in Myoko City, Japan. (Enterprise photo — Lou Reuter)

With two silvers and a bronze added to his collection of medals and awards, Edelstein broke through this time around in Japan, winning the gold for his age-group. He covered the 9-kilometer, three-loop course in a time of 56 minutes, 20.4 seconds.

“I felt like I ran a solid race,” Edelstein said. “I looked at my numbers and my stride rate never varied by more than one stride a minute between each mile segment. Very consistent there all the way through, and my speed was very consistent.”

Edelstein credited Rich Shapiro, a current Saranac Lake village trustee and bike company owner, as the first person to suggest giving snowshoe racing a try. That was about four months before the world championships came to this village.

“I was actually taking with Rich about gear clusters at an art opening,” Edelstein recalled. “He stops me in the middle of the conversation and says ‘You’re a runner. You should check this out. We have the world snowshoe championships coming to town, and they have a citizens race.’ I said, ‘I need another sport like I need a hole in my head. I’m already spending too much time running.'”

Being an avid runner, Edelstein naturally opted for the the longer distance. 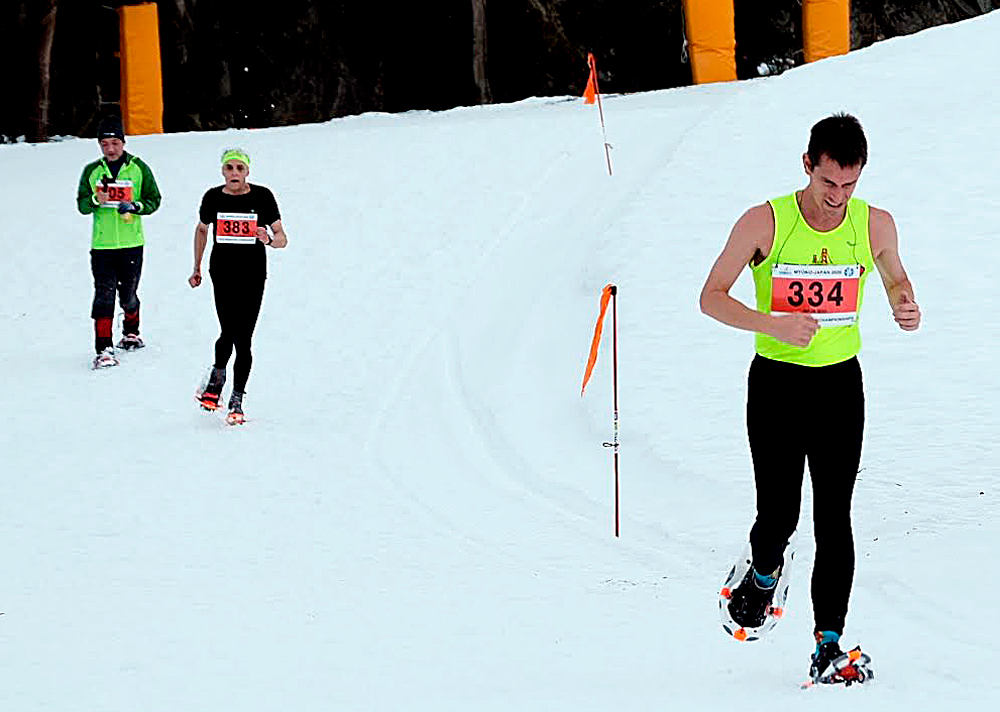 “A 5k, that’s too short. The main event’s the 10k, so I went right into the main event because I’m a runner,” Edelstein said. “I started way in the back of the pack because I was so intimidated, and I wound up with a silver. After that it just took off. I just had to keep going.”

Just like when he first started running in sneakers, Edelstein said it took him a little while to start enjoying racing with snowshoes.

“The first time I ran on them, it was like a death march,” he quipped. “It’s like your lungs shoot out of your mouth, you look for them in the snow, put them back in and keep running. But once you start to train muscles, it’s just like anything else. There’s a lot of extra resistance and you have to learn how to work efficiently.

“It’s exactly the same stride as running,” continued Edelstein. “I’m not standing any wider. Once these things are on, the only difference is my stride rate is a little bit slower because I’m slinging a weight, and my speed is a little bit slower for the same effort. Surprisingly, in this last race, there was a steep downhill and we were running in a heavy, wet snow, and on the last lap I peaked at a 4:35 pace. That’s faster than anything I can do on my feet. I was afraid I was going to fly too far one way or the other. I was flapping my arms.”

When traveling to world championships each year, Edelstein said he likes mixing sightseeing and experiencing different cultures into the competitive aspect of his trips. This time around, he stayed in Japan five more days after the race, which turned the trip into an almost two-week visit.

In addition to placing first in his age group, Edelstein finished 25th overall in a field of 84 males who participated in this year’s world championships. The women’s race featured 32 entries.

“It’s a sport I do well in,” he said. “My running is pretty good, but with the snowshoes, technique is more important or has a higher impact than it does in running. In running, a little better form gets you a little better. With snowshoes, because of the resistance of the snow and all the idiosyncrasies, technique can benefit me because I pay a lot of attention to it. That can help me equalize what I don’t have in strength and speed, so that draws me to the sport as well.”

A late bloomer when it comes to running, Edelstein has made big strides in a short time. Last April, he finished the 2019 Boston Marathon in 3:21:07, which landed him an impressive result of 44th place among 1,086 runners in his age group, even though he had to slow down late in the race due to sore quadriceps.

Edelstein credits Bob Tysen of the Fallen Arch in Lake Placid for much of his running success. He also said personal trainer Jen Mott, of Saranac Lake, has been a valuable teacher along the way.

“I started running, basically out of health when I watched my parents decline. I said ‘OK. I gotta do something.’ I was hiking, but if I ran half a block I was out of breath. When I was kid, I could run. There’s no reason I shouldn’t be able to run.

“When I first starting running, it wasn’t exactly a love experience or joyful experience,” he added. “It was like “Oh my God, this is just suffering.’ I love running now. It’s something I really enjoy.”

Edelstein said although it’s going to be another expensive trip, he plans to head to his fifth straight snowshoe world championships when the 2021 competition takes place in the southern Andes Mountains in the Patagonia region of Argentina. Because winter in the Southern Hemisphere occurs during our summer, the 2021 snowshoe world championships are expected to be held between August and September.

“The best part of this trip was getting the gold,” he smiled. “But there were a lot of great memories. It was just a wonderful time. The Japanese people were just so wonderful and so accommodating. Patagonia, August 2021 — I better start looking for sponsors. This is starting to get expensive.”