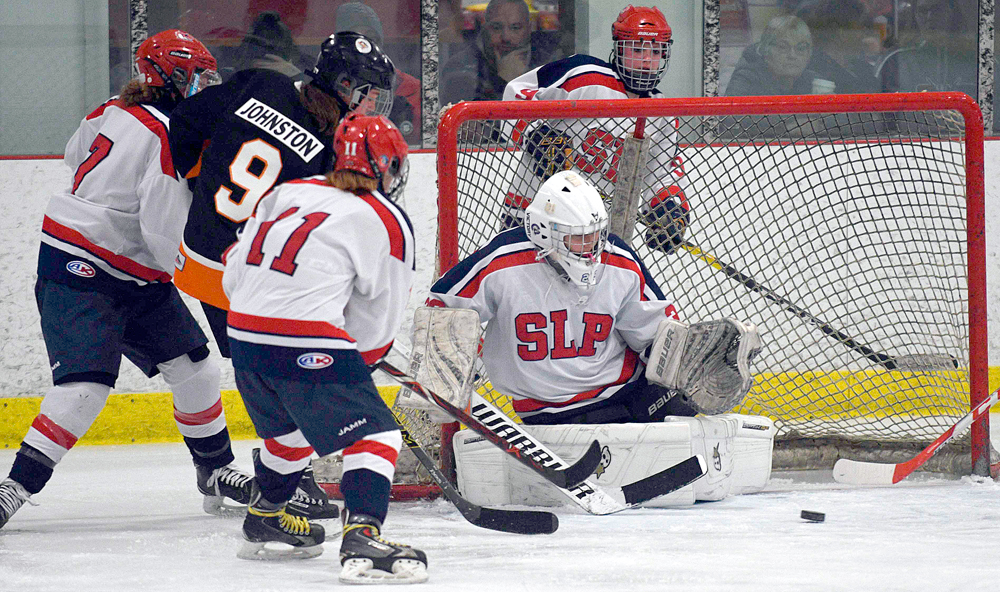 SARANAC LAKE — In an important game with possible playoff implications, the scoring woes continued for the Saranac Lake Placid girls hockey team, as Plattsburgh triumphed 1-0 on Monday in a Section VII matchup.

On SLP’s senior night at the Saranac Lake Civic Center, Plattsburgh’s Avery Holland spoiled the night for the home team when she buried the only goal of the game in the middle of the third period to lift the Hornets to victory.

The contest went back-and-forth from start to finish and featured great goaltending at both ends of the rink and plenty of scoring opportunities for both teams. The Hornets only needed to make good on one of their chances, and it came with 5:55 remaining in the third when Holland scooped up a loose puck in front of a fallen SLP defender near center ice, skated in along the right boards, broke toward the net and beat netminder Olivia Ferebee from in close.

SLP had loads of shots — 33 that were on net and another dozen or so that sailed just off the mark — but could not put a puck past Plattsburgh’s goalie Ava Julian. The junior was as solid as can be between the pipes to earn the shutout and end a four-game losing streak for the Hornets, who improved to 10-7 overall.

Playing their final home game of the regular season, the hosts finished with a 33-28 edge in shots on goal, but SLP coach Mike Bringley said the Plattsburgh defense did an outstanding job limiting second chances in front of their goalie. 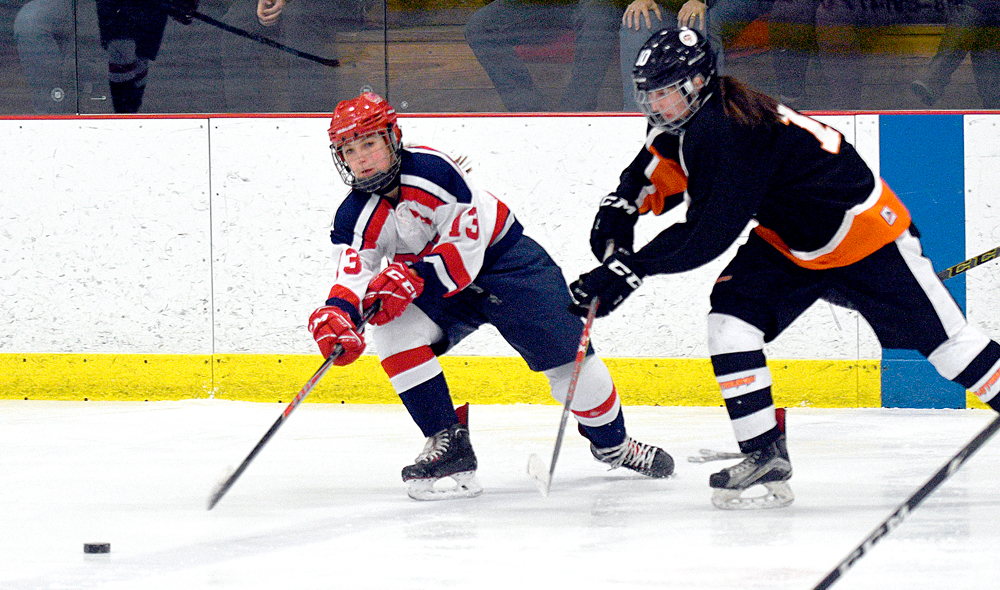 “We’re really struggling to score. We’ve only scored one goal in the last three games,” Bringley said. “I’m happy with the effort. We definitely didn’t get outplayed. We just couldn’t get a shot to fall, and it’s so frustrating when you’re stuck in this rut where you just can’t find the back of the net.

“We had 33 shots. Credit to their goalie, she made some nice saves,” Bringley added. “We played well enough that we got our chances, we just need to finish. It was a fun game to watch. Plattsburgh’s neutral zone coverage was great, and they did a good job making their zone time count. When they got it in our zone, they had a really balanced attack and generated really good chances.”

SLP went 0-for-4 on power play opportunities, and that included squandering a chance when Plattsburgh was called for a four-minute major penalty late in the opening period.

SLP dropped to 3-6-4 overall and 1-2-1 in Section VII league play. The Hornets improved to 2-2 in the league, and the win put them a step ahead of SLP in terms of a possible home playoff game.

“I thought our kids’ compete level was through the roof for 45 minutes,” Plattsburgh head coach Trevor Cameron said. “They never, never stopped skating, they played die-hard defense and we generated a lot of chances going up against an excellent goaltender. That’s a great team, Saranac Placid, and we went toe to toe with them.

“Six of our seven losses were by one goal, and we’re trying to figure out how to win them by a goal,” Cameron added. “Tonight, we were lucky enough to get great goaltending, and our girls willed themselves to find that goal to put us over the top.”

SLP has three games remaining in the regular season, which are all on the road. The run starts off with a matchup Wednesday at Massena slated to start at 5:15 p.m.

Plattsburgh next plays Beekmantown Friday in a Section VII game