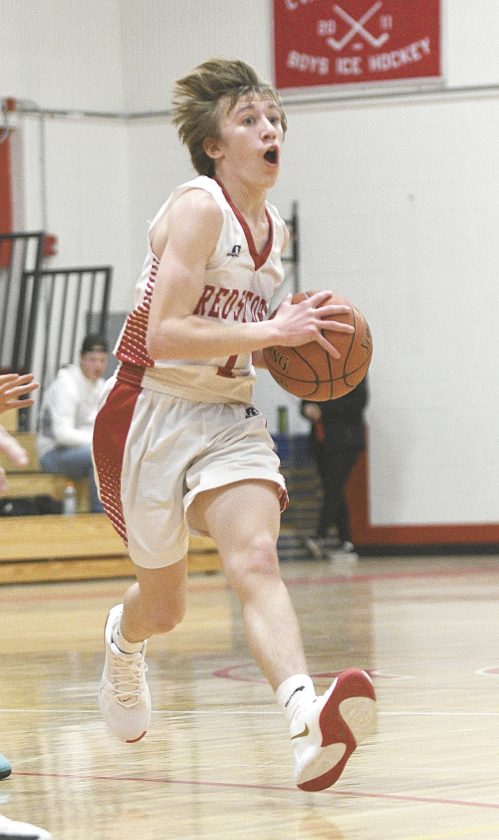 SARANAC LAKE — For the most part, Saranac Lake’s boys have been playing some pretty competitive basketball this season, even though they have had a tough time notching victories.

On Saturday, the Red Storm did come through with one of those wins, and it was a big one as they toppled Ticonderoga 53-34 for their first Champlain Valley Athletic Conference triumph of the season.

The Red Storm roared to a 33-8 lead at halftime and the Sentinels could get no closer than a 12-point deficit the rest of the way.

With the exception of a 35-point loss to Plattsburgh in their last start, the Red Storm has been in every game late in recent contests. Against the Sentinels, Saranac Lake took care of business to come out on the winning side and improve to 3-7 overall

Head coach Dermott Morgan said it was the best performance his Red Storm has turned in to date. 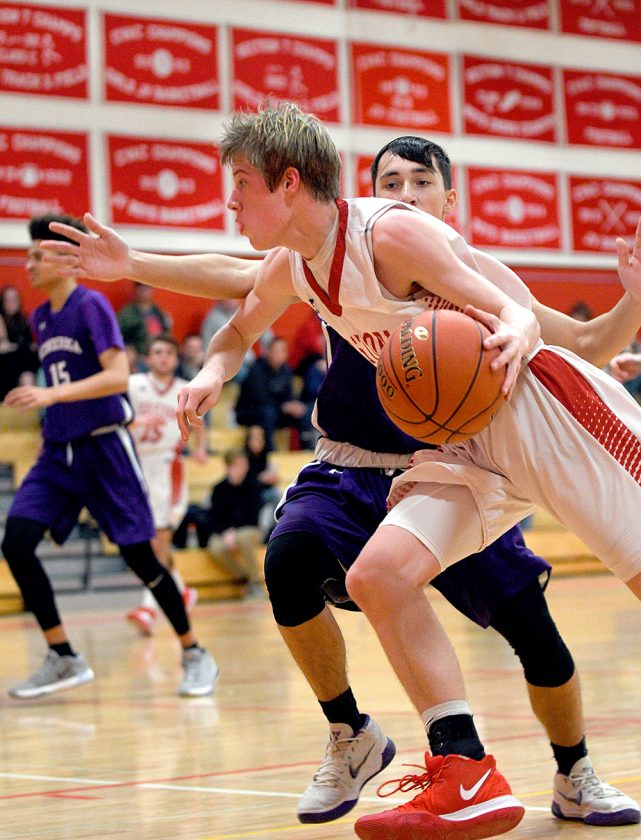 Saranac Lake sophomore Nate McCarthy drives toward the basket during the first half of Saturday’s home game against Ticonderoga. (Enterprise photo — Lou Reuter)

“I thought this was the first complete game we had all year,” Morgan said. “Two days before Plattsburgh clobbered us. They really pressured the ball and that gave us a lot of problems. We’ve lost too many games due to too many turnovers, but this time, we took care of the ball. They tried to trap us in the corner, our guards showed maturity, passed the ball out and got out of trouble.”

Morgan credited Saranac Lake junior point guard Brady Yando for his top effort of the season, and added that senior Dylan Stewart also had a solid game helping direct the offense. Although Yando only knocked down a pair of long shots to finish with six points, and Stewart scored a single two-point field goal in the matchup, Morgan said the pair did a great job limiting turnovers and passing the ball to open teammates.

“It’s the first time all year they’ve taken care of the rock like that,” Morgan said.

Sophomore Nate McCarthy had another strong game down for Saranac Lake while pouring in a game-high 22 points and collecting a team-high eight rebounds. After getting off to a cold shooting start from outside, Landon Faubert added 17 points for the Red Storm. The freshman started out 0-5 from three-point range, and then found the mark, going 5-for-8 behind the arc the rest of the way.

Saranac Lake owned an 11-8 lead at the end of the first quarter, and then dominated the second, outscoring Ticonderoga 22-0 in the period for what proved to be an insurmountable 25-point cushion at halftime. The Sentinels did find some life by winning the third quarter 18-9, but it was too little, too late as they fell to 2-10 overall.

“This was a big win for us,” Morgan said. “It was a league game, they are a Class C team like we are, and we really put things together. The kids played great, they’re getting better, and this shows we compete with Class C teams. Hopefully, we can pick up a few more wins and maybe get a home playoff game. That would be a nice goal. That would be great.”

The Red Storm will take on another Class C foe in their next game when they travel to face AuSable Valley on Tuesday.