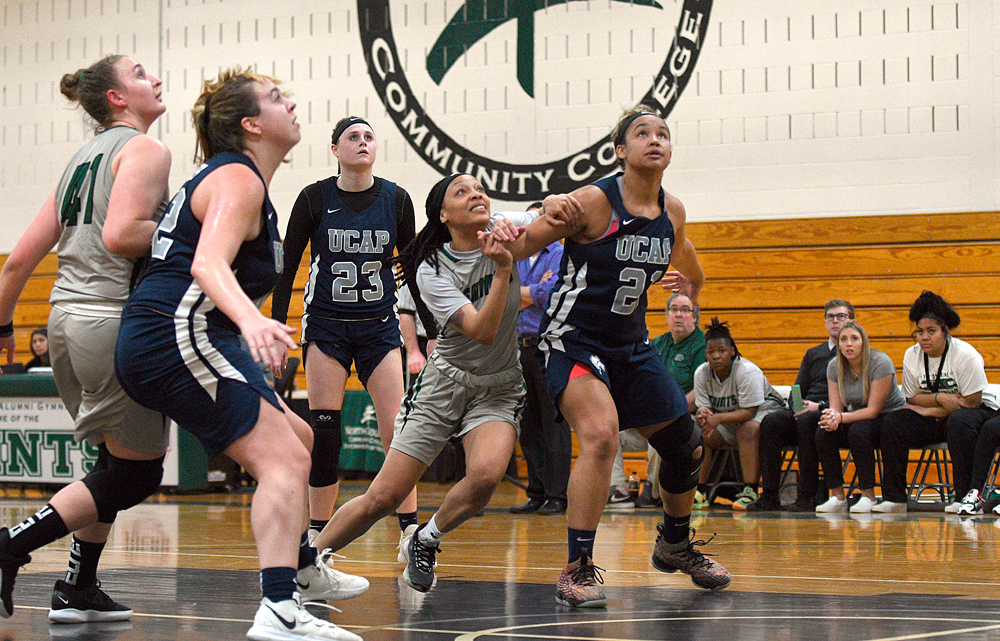 After seeing their 19-point lead dwindle to three at the end of three quarters, the Saints turned it on down the stretch to pull away for an 89-68 victory over UConn Avery Point at the Sparks Athletic Complex.

The game was the championship matchup in the Saints’ inaugural North Country Invitational Tournament. After rolling to a 44-point win over Pennsylvania’s Mercyhurst North East in Friday’s first round, NCCC faced a much more difficult task taking on Avery Point.

The Saints appeared to be comfortably in control at stages of Sunday’s game. They led 44-31 at intermission and then stretched the advantage to 19 points before the Pointers came storming back on the strength of an 11-0 run. A three-pointer by Abby Stone in the closing seconds of the third cut Avery Point’s deficit to 58-53 heading into the final quarter.

That’s when NCCC caught fire as it opened the fourth with a 17-4 run to essentially seal the deal.

After watching his team cruise on Friday, Saints head coach Jerrad Dumont liked how his players responded after the Pointers made it a really close contest in the second half.

“I thought it was a great test for us,” Dumont said. “UConn Avery Point is typically ranked nationally. They were ranked as high as 10th earlier this season, and they made it to the national tournament last year. They get down the floor quick and take shots, they make shots, and I think it was a game of runs today.

“They went on a run and we went on a run, and I think that was good for us though,” Dumont continued. “Unfortunately we haven’t had a lot of close games this season so this was a good way for us to see what we have, and I thought we kind of dug in in the fourth quarter and played good defense. It kind of showed our truth.”

The Saints headed into Sunday ranked second in the NJCAA Division III women’s national poll. They improved to 13-0 with the victory.

Four players reached double figures for NCCC, with all-American sophomore Kayla Carder leading the way with 25 points, including 14 in the fourth quarter. Lavender Ward followed with 19 points, Damoni Wells tossed in 13 and Lauren Denny chipped in 13 points for the winners.

Stone, a 5-foot-11 guard, paced the Pointers with a game-high 35 points, which gave the freshman 67 points in two tournament games played over the weekend in the Saints’ gym. Stone drained 32 points on Saturday in her team’s 84-63 first round victory over Mercyhurst.

Although Saints first-year sophomore Talesa Campbell only tossed in four points Sunday, the point guard turned in another standout performance from one end of the court to the other, especially when it came to getting the Saints offense off and running and feeding the ball in low to Carder.

A year ago, Campbell missed the season with an ACL tear. Over the weekend, she was named the tournament’s most outstanding player.

“I thought Talesa Campbell really led us today,” Dumont said. “She has a really high basketball IQ. She knows when to penetrate, knows when to reverse, knows when to kick and she plays with energy. She sat out injured last season, and it’s nice to have her back.”

“Energy was down so we just had to go back to playing our game,” Campbell said. “We had to get in the paint, penetrate, kick, move the ball really fast. We did a better job rebounding in the second half. We crashed the boards offensively and defensively, and we ended up making some runs.”

Avery Point fell to 9-4 overall with the setback, and despite the loss, Pointers head coach George Hardison liked the way his team battled.

“I know they fought hard in the third quarter to get back into the game,” Hardison said. “That’s what I said to the kids after the game. To be where we are now from five weeks ago, playing the No. 2 team in the country. It was a tough game, and that was a good effort.

“They were able to outlast some of our runs,” Hardison added. “Some of their defensive pressure started to rattle our guards a little bit toward the end.”

NCCC’s women next play at home Tuesday in a doubleheader with the Saints men. The games will be against University of Maine Machias, with the women taking the floor at 2 p.m. and the men following with a slated 4 p.m. tip-off.

Campbell feels that being a close-knit team has so far provided the formula for the Saints’ success.

“It’s been a lot of fun because we have chemistry on and off the court, which makes this special,” she said. “We get to play together on the court and then hang out together. We don’t have to run an offense a lot. We just know when to kick the ball, know when to swing the ball, know what each other is doing. That’s what makes us good. Today, I feel like we were a little slow. I feel we could have been better but we came out with a win, so I can’t complain.”