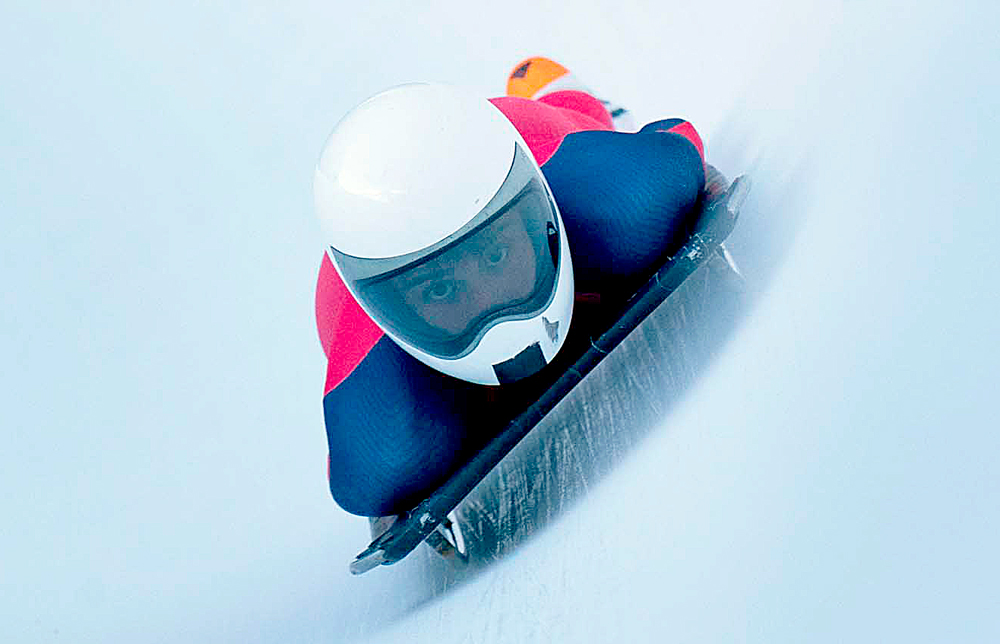 For Teddy Fitzsimons, sport has been a passion since he could remember. He tried them all: wrestling, gymnastics, track, cross-country, baseball, football, lacrosse and soccer.

But it wasn’t until his favorite sport — wrestling — was no longer an option that he found his new love. His high school didn’t have a wrestling team during the winter, which left Fitzsimons looking for an activity to expend his energy.

That’s where skeleton comes into play.

“I started skeleton as an accident,” Fitzsimons said.

An accident in his mind, but maybe his mother always saw this happening. Skeleton is a family affair, as his mom was a skeleton athlete who competed on the world cup circuit some years ago. According to Fitzsimons, she would have made it to the Olympics, but her event was not included on the Olympic program.

“My mom did skeleton so she kind of dangled the idea in front of me,” Fitzsimons said. “I went up to Lake Placid later that year and tried skeleton.”

He attended a training camp, and a few months later, he returned to Lake Placid to slide for a week. After that, he made the team and was hooked on the adrenaline the sport brought.

“I’ll never forget the first time I tried skeleton,” Fitzsimons said. “It was absolutely terrifying. I remember I hit one wall and all the alerts in my body went up.

“But when I finished the run, I was like, ‘I have to do this again. I want to do this without it being terrifying.’ So I did it for about a week and finally I overcame my fears of the sport and it became really fun.”

Fitzsimons has been hooked ever since. Though his passion for the sport is evident, Fitzsimons admitted that he does not get to the track as often as he would like. As a teenager living in Manhattan, making the trek to Lake Placid is not as easy for him as others.

“I’m out-experienced by most of the athletes, so I’m really doing everything I can to get up to their level,” Fitzsimons said.

Because his time on the track is less than his teammates and competitors, Fitzsimons, who has only been consistently sliding for one year, has turned to his passion for robotics to help give him an edge over others.

“Robotics helps because it ties in with engineering, and I love to work on my sled,” Fitzsimons said. “Since I’m not the strongest, fastest, biggest or have the most experience, what I’m really focusing on is perfecting my sled. In my opinion, that’s the best way I can really catch up to the people here. Connecting robotics and engineering helps.”

Before coming to St. Moritz, Switzerland, to compete in the Winter Youth Olympic Games, Fitzsimons said there were three nights in a row while he was training in Lake Placid that he did not go to bed until three in the morning because he was tuning and adjusting his sled.

One item Fitzsimons has been working on lately is the structure of his saddle, which is the part of the sled that holds a rider’s body in place. The saddle had been irritating his ribs during some runs, so he turned to his passion for robotics to try to fix the issue.

“Robotics is, in my opinion, problem solving,” Fitzsimons said. “When you’re doing robotics, you’re not looking at an instruction manual. It’s the same thing with making your sled. It’s trial and error, so you’ll adjust one thing about your sled, try it out the next day, and it might not work. So you’ll go back the next night, undo it and make another change. It teaches you the importance of working on your equipment.”

For Fitzsimons, combining his passion for robotics and skeleton is a perfectly intertwined way to help give him an edge. While he self-admittingly is not the fastest athlete with the most experience, it is the burning desire to better his sled and himself so he can show the world what he is made of. He will get that chance on Monday, Jan. 20, when skeleton competes in St. Moritz.

“I don’t get pushed around much, and when people don’t believe in me, that’s really where I step up and believe in myself,” he said.