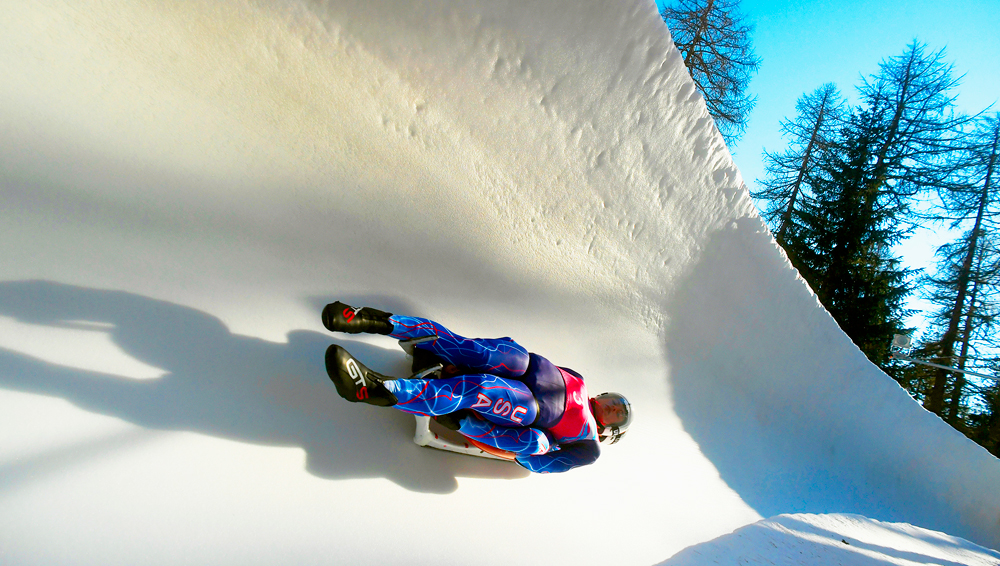 The United States doubles luge team of Sam Eckert, of Wilmington, and Sam Day race down the track in St. Moritz, Switzerland, on Friday during the Youth Olympic Games. The duo finished finished eighth in the event. (Provided photo — Olympic Information Services)

LILLEHAMMER, Norway — There are major competitions in Switzerland and Norway this weekend, with the Youth Olympic Games luge events now underway and the Viessmann World Cup tour continuing in Lillehammer.

The long-awaited luge events at the Youth Olympic Games in Lausanne commenced Friday morning. The competitions are taking place on the hand-crafted, iconic track in St. Moritz created perfectly from ice, snow and slush. The course, a spectacular five-hour train ride from Lausanne, begins on the edge of the village and ends in nearby Celerina. The youth athletes, however, are not using the entire length.

In St. Moritz, McKenna Mazlo was 15th in singles, while the doubles team of Sam Day and Sam Eckert took eighth.

Day, of Wantagh, and Eckert, of Wilmington, got off to a fifth-place start after the first leg, trailing the Russian leaders by 0.8 of a second down the long St. Moritz course. The U.S. entry reached a top speed of nearly 74 miles per hour. Their second run opened even faster, but the duo lost time as they approached Celerina and landed in eighth place in a combined time of 1:53.857. The medals went to Germany, Latvia and Russia in that order.

Meanwhile, USA Luge’s Chris Mazdzer says he’s “just taking it day by day,” but the 2018 Olympic silver medalist from Saranac Lake needs some time off the track to heal his injuries, the most recent occurring to his neck on Wednesday on the 1994 Olympic run in Lillehammer.

Emily Sweeney, the 2019 World Championship bronze medalist who lives in Lake Placid, withdrew from last week’s second heat in Altenberg, also with a neck problem. She has not seen the Lillehammer ice surface this week. Both will be sidelined this weekend in their discipline races when the Lillehammer World Cup events are contested.

Mazdzer is the only competitor on the World Cup tour handling singles and doubles chores. He and doubles partner Jayson Terdiman, of Berwick, Pennsylvania, did not participate in Friday’s Nations Cup qualifying for the weekend World Cup action in Lillehammer, Norway, making them ineligible to race. Mazdzer also did not take his final (seeded) singles training run Friday afternoon.

Earlier in the day, Arndt accelerated her way to a silver medal, finishing 0.22 from Nations Cup winner Ulle Zirne of Latvia. Farquharson was 12th, good enough to continue her streak of qualifying for all World Cup races in her first season. She, too, was finding speed down the Hunderfossen track before losing time in the mid-section. Both athletes are also striving for a spot in next month’s World Championships in Sochi.

That’s not an issue for Jonny Gustafson, of Massena, who solidified his World Championship berth last week in Altenberg. Gustafson took fourth Friday in the qualifier, placing just 0.15 behind German winner Sebastian Bley.

YOG luge events resume Saturday morning at 2:30 a.m. ET with men’s singles followed by the historic debut of women’s doubles. The U.S. will be represented in singles by Matt Greiner, of Park City, and Hunter Harris, of East Fairfield, Vermont. Maya Chan, of Chicago, and Reannyn Weiler, of Whitesboro, will partner for the day’s finale. After a day of rest on Sunday, the team relay ends the luge segment of the YOG program Monday morning.