Beavers take bite out of Bombers 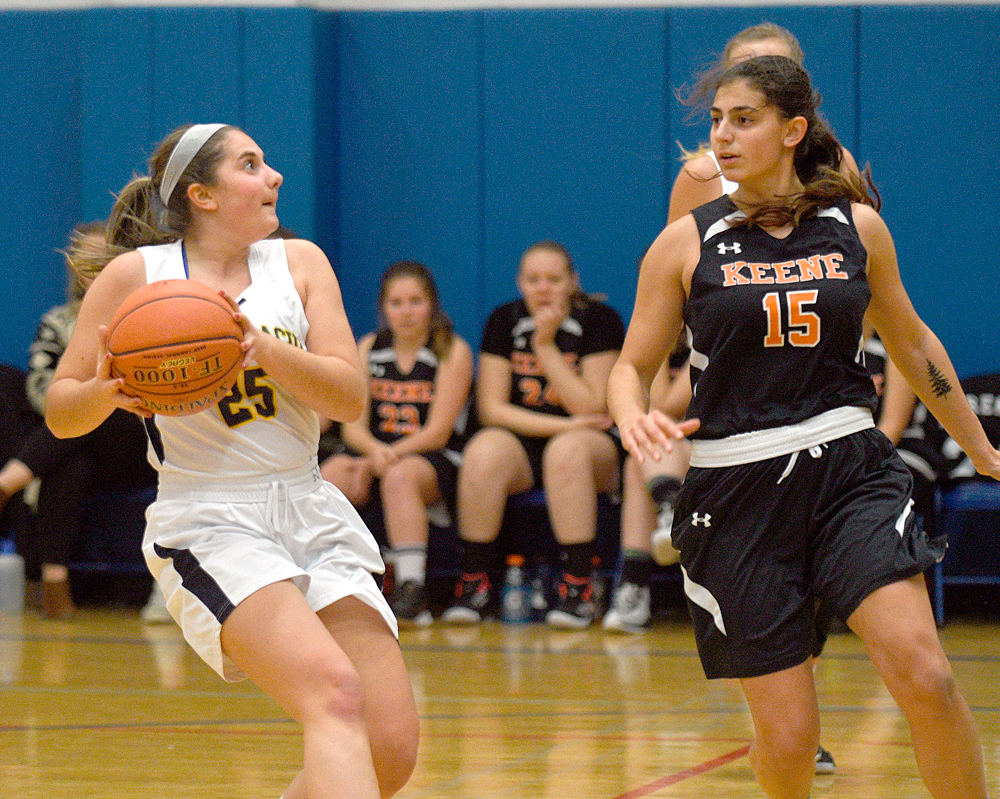 In the low-scoring game, Keene led 5-2 after one quarter, stretched the advantage to 18-7 at halftime and held a double-digit edge the rest of the way to improve to 8-2. The victory gave the Beavers a two-game sweep of the Blue Bombers in league play this season.

Lake Placid entered the game without starter Grace Crawford, who was sick, and then saw key players run into difficulties throughout the contest. Lake Placid point guard Natalie Tavares injured her ankle midway through the first quarter and saw limited playing time from there, forward Deidra Kellerman fouled out with more than a minute remaining in the third period, and another starter, Arnita Cecunjanin, played much of the second half with four fouls.

Alyssa Summo paced Keene with a game-high 11 points and Megan Quinn tossed in nine points, which all came in the first half, in the victory. Four other players combined to score 15 more points for the Beavers.

The Blue Bombers were without their head coach Jeff Potter, whose mother passed away last week after a long illness. John Burdick and Cameron Shipman took over Potter’s duties leading a Lake Placid team that brought up five junior varsity players for the game.

“We were missing one of our starters, and then Natalie got hurt early and that kind of took the wind out of our sails,” Burdick said. “The kids played hard, but Keene has some quick kids, and they take advantage of that. We had problems with their pressure. We had a lot of turnovers. Some were our fault, some they forced.

“Deidra played well, got into foul trouble, and Arnita, our other forward, she had four fouls,” Burdick added. “We took her out and that point and she stayed out because at by then, the game was not in question.”

Keene coach Josh Whitney said Keene has been depending on the leadership of his three senior captains — Caitlin Quinn, Emily Whitney and Summo — and likes what he’s seen from the team so far.

“It’s been a nice start to the season,” Whitney said. “We like to apply pressure. We think that it changes the dynamics of the game. I’m very pleased with how the girls are playing effort-wise and tonight was a solid win. I like this team. They are a classy team.”

Following the game, Whitney offered his condolences to coach Potter.

“I’m a big fan of coach Potter. I missed seeing him with his team tonight,” Whitney said.

Keene’s two losses have both been by double digits to Moriah and Bolton, which are two strong opponents. The Beavers next host Bolton on Thursday starting at 6 p.m.

“It will be a battle. They’re a good team,” Whitney said.

Coach Potter is expected to be back on the bench when Lake Placid next plays at home Thursday against Crown Point. The opening tip-off is scheduled for 6 p.m.