Sledders prep for round 2 in LP 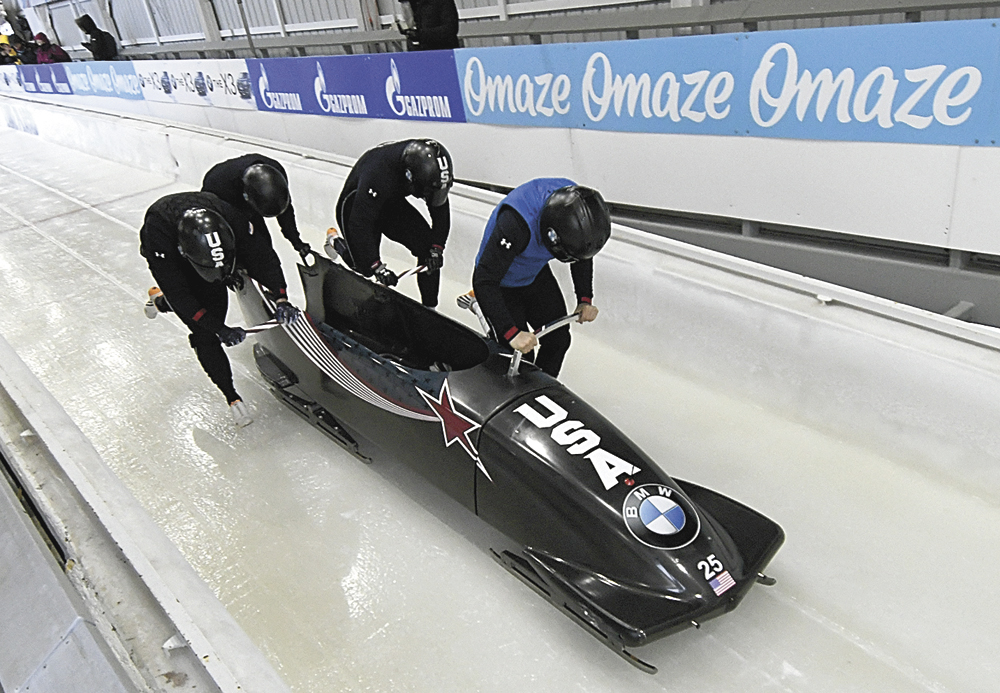 United States pilot Hunter Church and his crew push their four-man sled down the start ramp Wednesday during training at Mount Van Hoevenberg. They were preparing for this weekend’s World Cup races, which are being held for the second straight week in Lake Placid. (Enterprise photo — Lou Reuter)

LAKE PLACID — It’s round two of sliding in Lake Placid this weekend as the second set of World Cup bobsled and skeleton races take place at the Olympic Sports Complex.

The International Bobsled and Skeleton Federation’s season-opener was originally slated to take place two weeks ago in Park City, Utah, but refrigeration issues at that North American track forced the event to be moved to Lake Placid.

That resulted in rare back-to-back World Cup races being hosted at the same venue, with the second week of racing in Lake Placid kicking off Friday, with men’s and women’s skeleton races. Competition on Mount Van Hoevenberg’s mile-long run then moves into women’s bobsled and the men’s four-man bobsled on Saturday and wraps up with another four-man race Sunday.

Kaillie Humphries was the most successful member of the United States team a week ago in Lake Placid, driving to the gold medal in women’s bobsled. She’s a rookie on the U.S. squad, but is no stranger to shining on the track. A former Canadian star who drove to two bobsled golds representing that nation, Humphries switched over to the American team late this summer as she looks to gain U.S. citizenship and ultimately compete for this country at the 2022 Beijing Winter Olympics.

Humphries will be joined for the second straight week by push athlete Lauren Gibbs as the pair looks to claim a gold medal sweep of Lake Placid’s two World Cup women’s races this month. 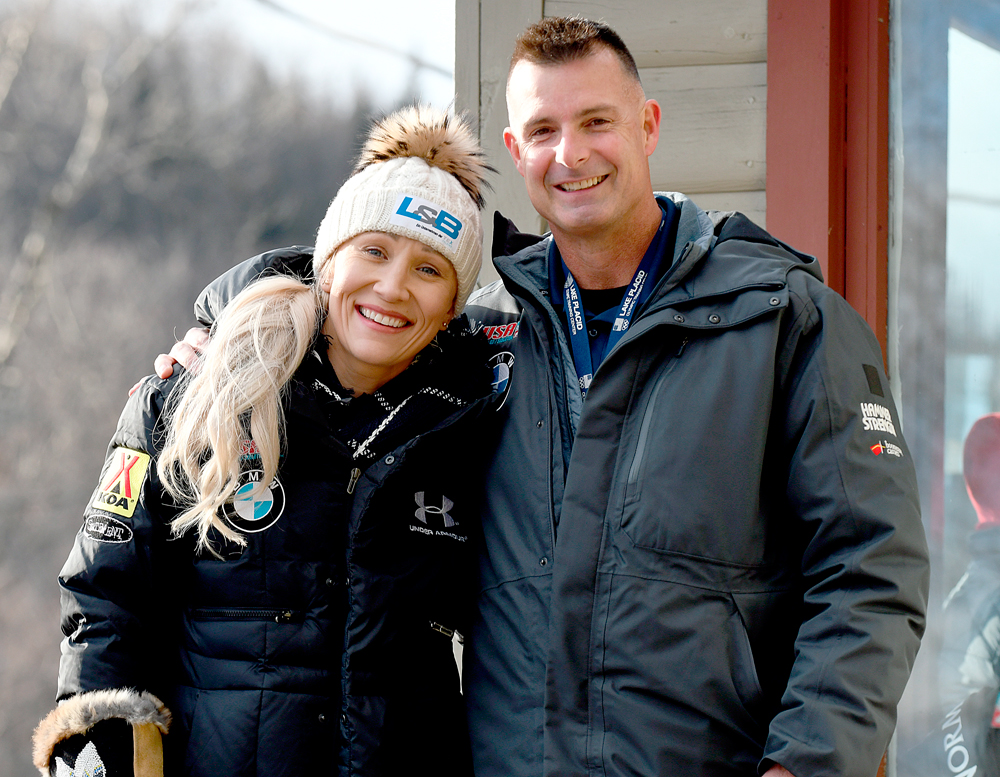 Humphries and her teammates were at the track Wednesday putting down training runs in preparation for the weekend. After leaving the Canadian program following the 2018 Pyeongchang Olympics, Humphries said she’s happy as a U.S. slider so far.

“The team’s been very supportive,” she said. “I’m a part of this team, and we’re focused on moving forward. I bring the experience and the high performance side after doing this for 15 years, but at the same time, I’m a rookie on the U.S. team. We’re all working very hard to achieve strong results each and every week.

“The sliding has been going OK. I’ve had to knock the rust off in certain places, I’ve been testing out a couple different sleds, and last week was confirmation that I can jump back into this. The skills haven’t been lost. It’s like riding a bike. Overall, it’s been good, it’s been fun and I’m excited about things to come.”

The U.S. women will have two sleds competing Saturday, while the men are expected to enter three sleds in both four-man races.

Brittany Reinbolt will pilot the second American women’s sled. A week ago, she joined push athlete Sylvia Hoffmann to place seventh in the season-opener. She’s hoping for a better result this time around. 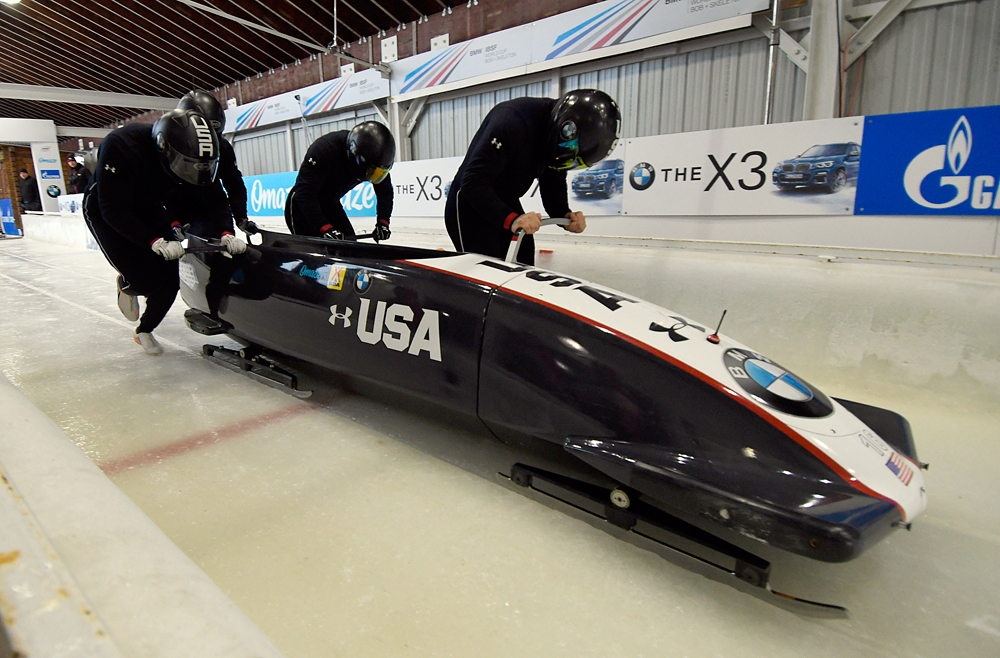 American pilot Codie Bascue and his crew start their first training run Wednesday as they prepare for this weekend’s four-man races as World Cup bobsled and skeleton action takes place for the second week in a row in Lake Placid. (Enterprise photo — Lou Reuter)

“It went all right, but not the best performance on a home track,” Reinbolt said describing last week’s race. “When you’re on your home track, you want to be fighting for the medals. But that’s life, and it can’t always be butterflies and rainbows, so we’ll go back at it again this weekend and give it a second shot.

“A top-seven in a World Cup isn’t bad, but we’re looking for better,” she added. “I’ll use last week as motivation to do better. We just want to have a good attitude, fire it up and have fun representing Team USA, and I think that will carry us a long way.”

There was no four-man racing at Mount Van Hoevenberg last week. Instead, there were a pair of two-man competitions, with the scenario switching this time to two four-man races.

Hunter Church, who grew up nearby in Cadyville, was the top U.S. men’s driver a few days ago, placing fifth in both events along with push athlete Kristopher Horn. Codie Bascue, of Whitehall, and Geoffrey Gadbois will pilot the other two American four-man sleds over the weekend.

American push athlete Christopher Kinney didn’t participate in last week’s racing, but he’ll be in action this weekend after just completing graduate school at East Tennessee State. Kinney competed in four-man at the 2018 Winter Olympics in South Korea with driver Nick Cunningham, and will be on either Bascue’s or Gadbois’s crew this weekend.

“I just wanted to get my degree so I can get 100% back into bobsled,” said Kinney said, who was studying international business. “School went well. I’m done.

“We’re a very new team,” Kinney continued. “This is our home track. I think this will be a good set up for World Championships, because they are going to be here next year. I’m excited. Our pilots know this track like the back of their hand. This year is just a stepping stone, and we’re going for medals.”