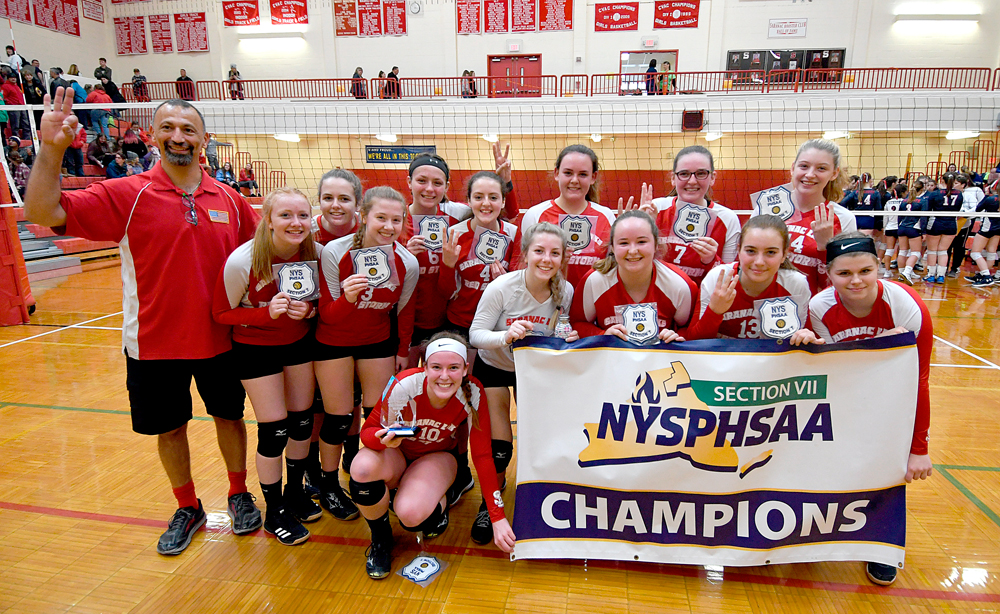 PICKETTS CORNERS — When Mike Navarra took over as Saranac Lake’s volleyball coach five years ago, he inherited a team that won just a single match the season before.

Oh, how things have changed since that time.

The victory marked the third straight crown for the five seniors on the team, and it took their dedication throughout the fall and during the offseason to make that happen. It also required the effort of a handful of juniors and younger to get the job done.

Facing a Patriots team they split two close contests with during the regular season, the Red Storm rolled in the final, winning by 25-6, 25-22 and 25-11 scores. 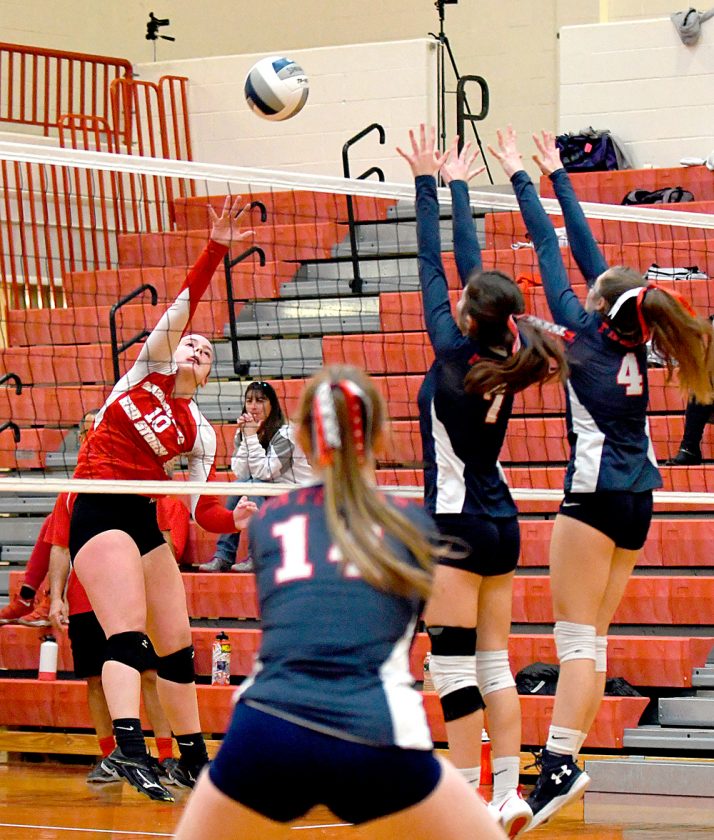 Four seniors, Sydney Andronica, sisters Katie and Madie Gay and Meagan O’Brien played key roles in the victory, as did junior Kelsey Leeret and sophomores Mia Sanford and Tailor Whitson. Saranac Lake’s fifth senior, Nora Glover, dressed for the match but did not play. She missed about the final month of the season due to an illness.

Navarra credited the commitment and leadership his seniors provided in helping the Red Storm nail down another title.

“My five seniors have kept their head in the game. They’ve done it for three straight years and they should be proud of their efforts,” Navarra said. “What they are teaching the girls below them is don’t ever give up, continue to work hard and if you listen to your coach or the people with knowledge, you’re going to learn from them and be able to apply it to yourself. That’s what it boiled down to tonight.

“It’s not an easy road to get there,” Navarra added. “I’m just thankful I have a committed group of young ladies who are willing to put in a strong effort each and every day. They show up to practice and work hard.”

Saranac Lake’s serving and hitting were particularly sharp in the championship match, and the Red Storm’s experience was also a factor in the victory. 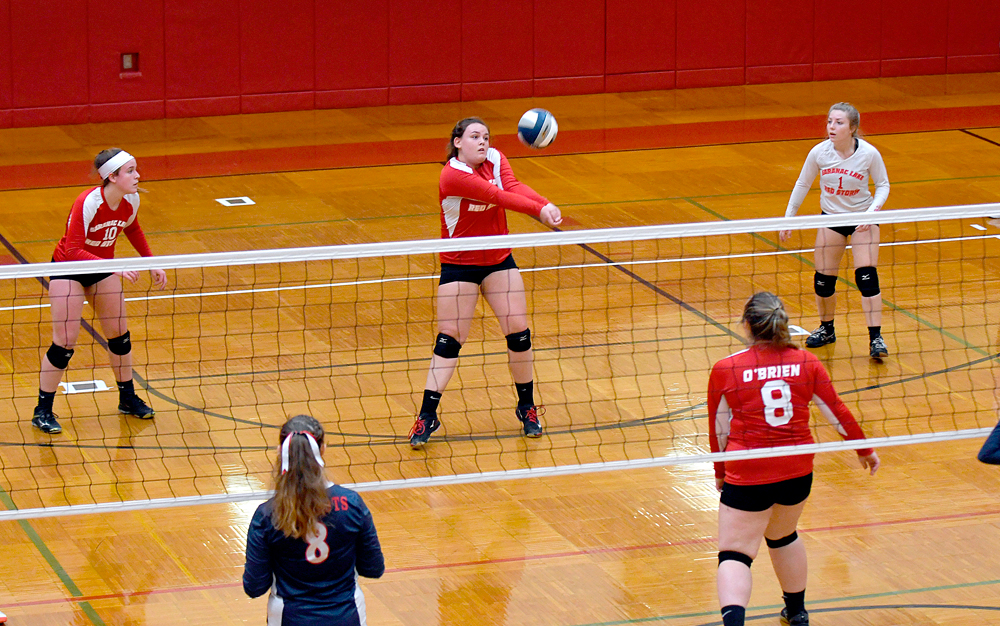 “I just think that it was our inexperience in a game this big,” AuSable Valley coach Peggy McCallister said. “My girls just played so tight that first set, and then they came back the second set and did what they were supposed to do but came up short. Just one of those days when our game wasn’t with us.”

Saranac Lake’s lineup combined for 10 aces, and O’Brien led the way with four. She also chipped in nine points. Katie Gay had three aces, 10 point, six kills and 14 digs, and Madie Gay finished with a team-high 12 points, along with 11 digs, and ace and three kills.

Andronica owned the back line again for the Red Storm, finishing with 45 digs. She also chipped in two aces and five points.

Leeret finished with an ace, 11 digs and 10 points in the win, and Whitson had one ace, two digs and three points.

McCallister the combination of Saranac Lake’s strong performance and her team’s off day were factors in the Red Storm’s sweep.

“I think what they did differently today was their hits were spot on, and we had trouble receiving their serves.” McCallister said. “Usually we can handle that with no problem. They’ve been here. All their seniors; it’s the third year varsity for them and the third year sectional final. They’re a tough team.”

Andronica said after splitting with AuSable Valley during the regular season, the Red Storm didn’t want to leave anything to chance with a championship on the line.

“The first time we played, for some reason we were really out of focus. We figured we’d just go there and win because that’s how it’s been in the past,” she said. “When they beat us the first time, that was a reality check. The second time we played, we beat them by a tiny bit; almost by luck, so when we came in today we were tipping the ball in places where we knew it was open, and hitting where we needed to hit. It just came together, we came together as a team and it was really good. We had to outsmart them because their defense is so good that they can pop almost anything up.

“A three-peat, it’s amazing. There’s not a better feeling, especially because it’s my senior year,” Andronica added. “We might not have the most skillful team but we have so much heart and we worked so hard for everything we’ve accomplished in all of our seasons together.”

The Patriots last reached the Class C championship match six years ago. They finished with an 8-8 record.

Saranac Lake improved to 14-4 overall and now moves into a regional match on Saturday in Beekmantown. The Red Storm will take on the winner of Thursday’s contest between Section II champion Lake George and Section X champion Canton.

The Red Storm did not get past the regional match the last two seasons and are hoping after reaching that level twice, the third time will be the charm.

“As we know, Saranac Lake was a 1-15 team, a 1-15 program six years ago, and now we’re starting to win championships,” Navarra said. “We have three under our belt the past three years, and it’s really due to the effort of these ladies. I have a game plan, I have a philosophy when I approach every practice, but they are the ones getting it done. I know hard work and dedication pays off.”